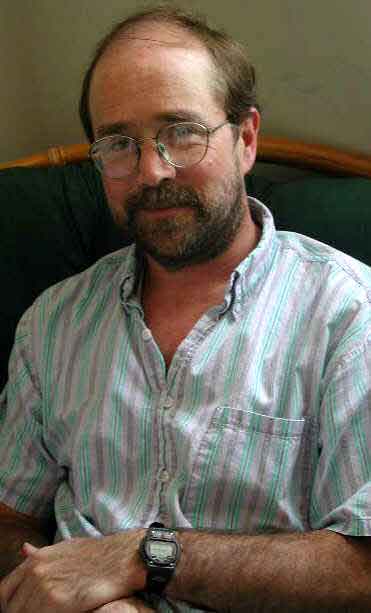 Dave Cooper is an environmental activist and organiser of Kentucky’s Whippoorwill Festival – Skills for Earth Friendly Living, set to take place from July 9 – 12 2015. In this piece he discusses the pros and cons of an experimental toilet composting system that he and his colleagues devised and employed at a number of small US festivals.

For the past 15 years, the Appalachian Mountains of the eastern United States have been at the centre of a pitched battle between grassroots environmental organisations and coal companies that use a mining process called Mountaintop Removal Mining.

In mountaintop removal, coal companies use explosives to remove the peaks of densely forested mountains to reach the coal seams, dumping the excess rock and debris into valleys and mountain streams. 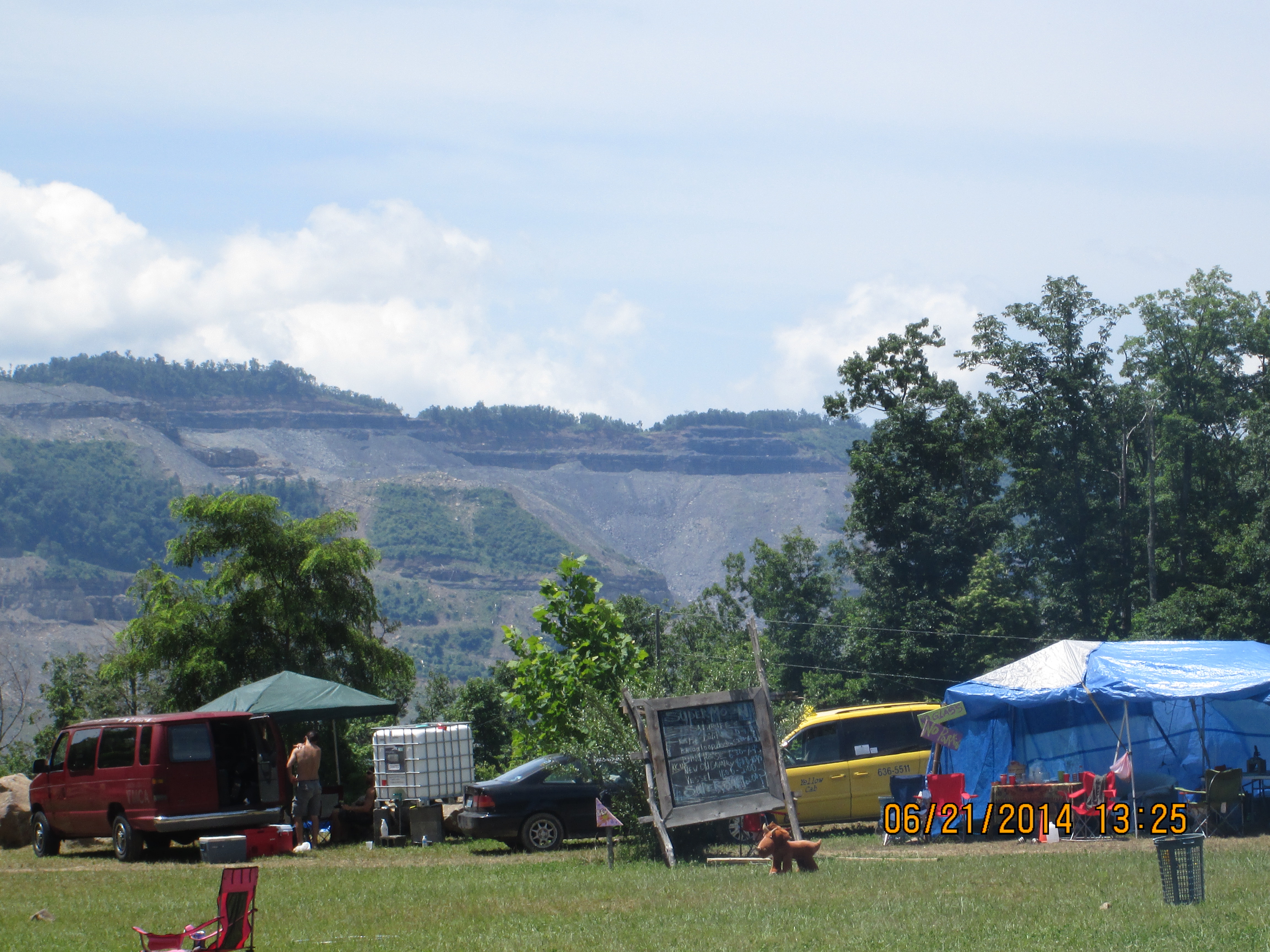 The mining method is controversial, ugly and generally kept well hidden. Even though 500 Appalachian mountains have been decapitated, many people have never seen a mountaintop removal mine. So when the environmental group Mountain Justice began searching for a location for their summer gathering, they wanted a site with a view of an active mine.

They found it atop Pine Mountain in eastern Kentucky at a former coal miner’s retreat called Wiley’s Last Resort, operated by a visionary poet and eccentric. Wiley’s has an absurdist motif that gently mocks the stereotypical images of American hillbilly culture.

“When we first saw the campground at Wiley’s, we thought it would be ideal for our summer camp – but it had no infrastructure,” said Mountain Justice organiser Eric Blevins. “No running water, no buildings, not even electricity. But it had a great view. We could see and hear the blasts going off.”

A team of Mountain Justice volunteers gathered in the spring of 2010 to build a pavilion, kitchen and stage, and they procured a truck-mounted solar system from Greenpeace to provide electricity. Two solar showers were constructed. For drinking water, they bought four large plastic tanks that previously held soft drink syrup. “The water tasted a little like Coca-Cola,” said Blevins.

A goal was to build the camp as environmentally friendly as possible, using salvaged and reclaimed materials. Cost was a big factor, and no one wanted to rent chemical toilets. 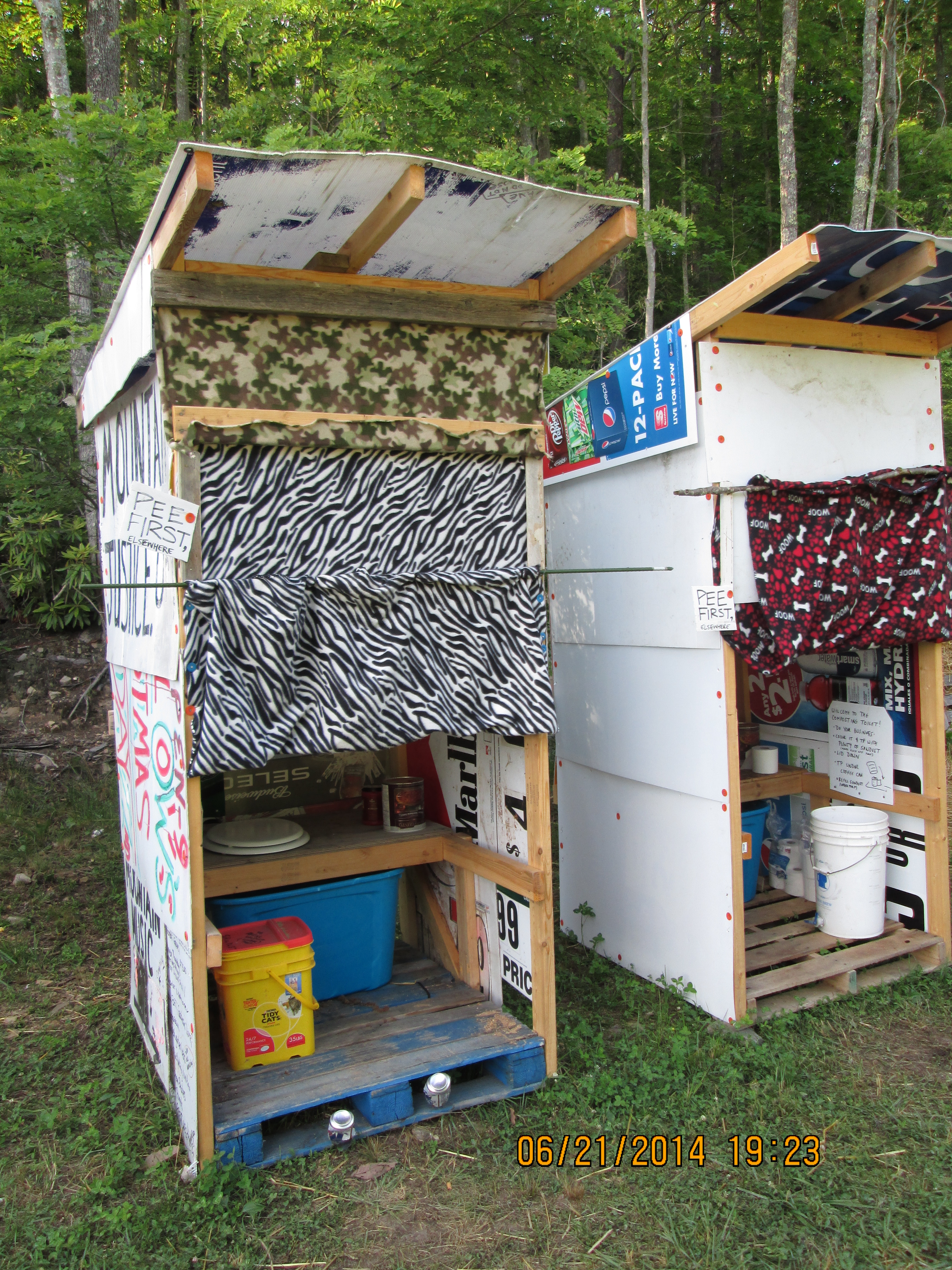 The composting toilets at Wiley’s were constructed using shipping pallets and plastic advertising signs salvaged from petrol stations and political campaigns. In keeping with Wiley’s absurdist tradition, they were designed to look like a mad hillbilly built them.

“We located the toilets as far away from the kitchen as possible, because we were concerned about flies and odor,” said camp organizer Kim Kirkbride. “We wanted to prevent flies landing on the waste piles and then on the food.”

Kirkbride made clever illustrated signs and posted them inside the toilets instructing people how to use the composting toilets properly. “Use lots of sawdust – cover all the waste and the paper to keep the flies off,” she said. Free sawdust was readily available at local sawmills, and was piled next to the toilets and covered with a tarp. Each composting toilet had a small bucket of sawdust inside and a scoop made from a soup can. “One scoop per poop” was the motto. At night, candles provided light inside the toilet stalls. 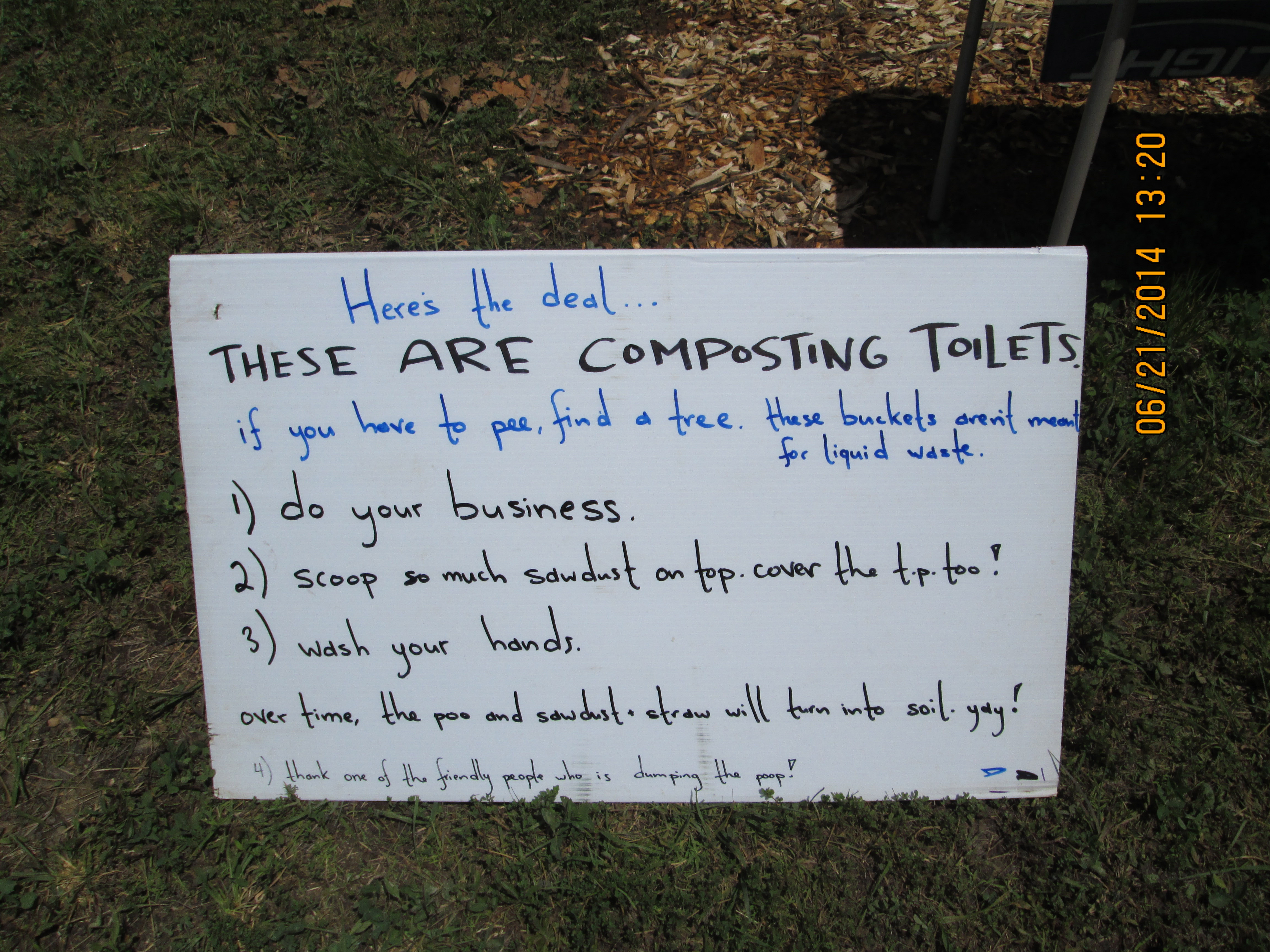 Initially, human waste was collected in plastic tote bins purchased at discount stores. But experience has shown that these are too light duty, and the group has now switched to heavy-duty tote bins from home improvement stores.

Mountain Justice found that the success of the composting toilet system depended upon having dedicated, conscientious volunteers. About every two hours, a volunteer inspected the toilets to restock and to ensure that enough sawdust was being used.

When about half-full, the totes were removed and dumped into larger bins constructed from four shipping pallets wired together, and covered with a generous layer of straw, allowing oxygen to penetrate the waste pile for proper decomposition. As Jenkins emphasises in The Humanure Handbook human waste without any organic materials added quickly becomes putrid, but an aerobically decomposing compost pile is almost odour-free.

“Some people worried that it would be a big pile of stink, but it just smelled like straw,” said Kirkbride.

Flies were no problem, even in the heat and humidity of a Kentucky summer. “We were almost shocked at how well the system worked,” said Kirkbride. 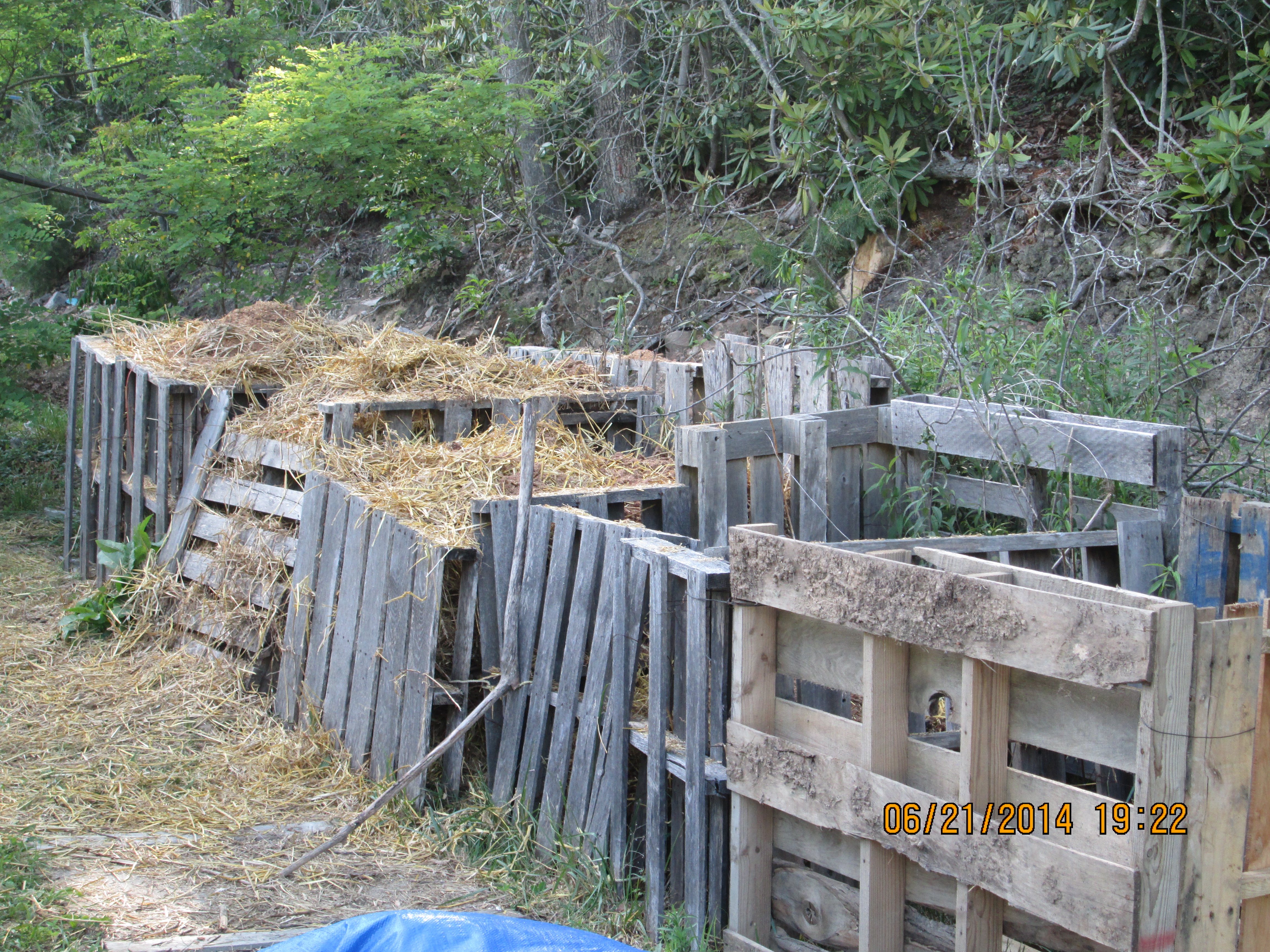 With a new, larger stage constructed in 2014, Wiley’s has become a popular festival site in the eastern Kentucky mountains, hosting 350 attendees of the Supermoon Music and Arts Festival (headliner: Rising Appalachia) and the Rising Tide National Gathering in the summer of 2014, as well as the 2014 Mountain Justice Summer camp.

The composting toilet system at Wiley’s has not been without problems. After events, bears have raided the compost piles (which also contain food waste) and high winds on the mountaintop have repeatedly blown the toilets over. Anchoring the toilets with rebar solved the blow-over problem. The bear problem has not yet been solved.

Are composting toilets feasible for larger festivals? The cost to build Wiley’s composting toilets was less than the cost of renting chemical toilets, but public acceptance will take time, since some people feel uncomfortable using a toilet where their waste is not whooshed away by a jet of fresh water.

Education is the key to selling the public on composting toilets as a more environmentally friendly system. Three points to consider:

In Kentucky, composting toilets are also being used at the Whippoorwill Festival – Skills for Earth-Friendly Living, the Clear Creek Music Festival, and at the Florida Earth Skills Gathering.