Home News The War on Drugs, Mariachi El Bronx and More for Forecastle

The latest additions join Sam Smith, My Morning Jacket, Widespread Panic, Modest Mouse and more than 50 other acts on the event’s roster. The three-day music celebration, now in its 13th year, will take place July 17 – 19, 2015 at the award-winning Waterfront Park – a sweeping green space on the banks of the Ohio River framed by the skyline of downtown Louisville.

The festival has also confirmed that Sister Sparrow & The Dirty Birds, Chris Stapleton, Lower Dens, Lizzo, Gabriel Garzón-Montano, Dr. Dundiff & Friends, and Fat Tony will play this year, in addition to the return of ASCAP Hours featuring an exciting mix of artists on the rise including Earl Burrows and Jeffrey James.

For tickets, the full line-up and more information, check out Forecastle’s official website. 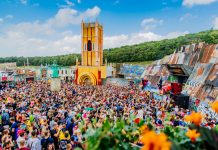