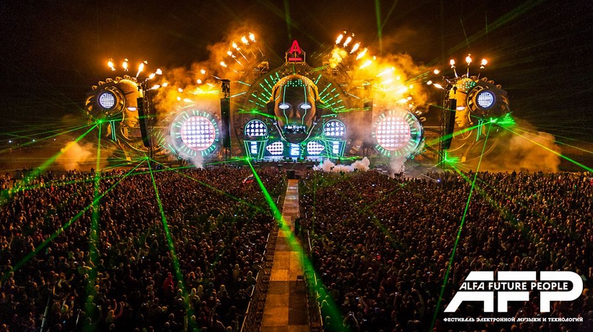 RUSSIA: EDM Festivals have mushroomed in popularity and scale over the past few years, branching out into a truly global phenomenon. Recently, Russian EDM fans gathered en masse to groove at the Alfa Future People Project.

Larikova said the team started pre-production one month before the event, using LTC sync for the most important parts of the show. The rig was created in 3D Max and imported into LightConverse for the pre-programming. Notably, the designer spec’d 3000 meters of flexible LED for the stage. A total of 114 Art Net universes were used to control 800 LED sticks and 700 LED pixels integrated in the decoration set.

High End’s Hog 4 was not only the main control system for the lighting and media but also for nine 20W white lasers and two green lasers. Larikova commented: “All the visuals were controlled from the one HOG4 system! The introduction, opening and closing ceremonies were programmed and played back with LTC. As a sub control systems we used Hedge Hogs. We also used Hog 4 to control Catalyst Media servers with Pixel Mad for LED pixels.”