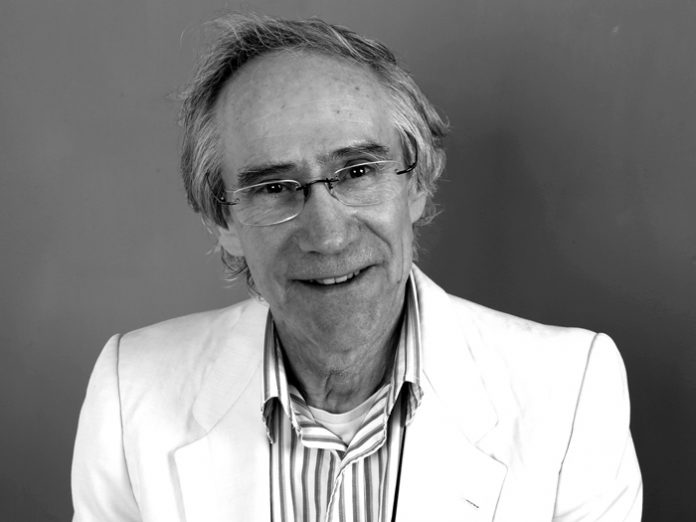 The following is an extract from Ray Foulk’s memoir The Last Great Event, which tells the story of the 1970 Isle of Wight Festival – featuring stars such as Jimi Hendrix, Jim Morrison and The Who. Ray Foulk and his brothers Ronnie and Bill founded the festival in 1968, overcoming island opposition and coaxing Bob Dylan out of hiding to perform at the 1969 festival (the subject of the first volume of When the World Came to the Isle of Wight, entitled ‘Stealing Dylan From Woodstock’). The 1970 festival was their final endeavour and this extract records the performance of the headline act, Jimi Hendrix, who sadly died only 18 days later.

We were waiting for James Marshall Hendrix to appear.

In the early summer, manager Mike Jeffrey had exhorted Hendrix to embark on a European tour in order to cover the huge outlay for his new Greenwich Village studio and nightclub. Ronnie subsequently had a jovial lunch with his agent, Dick Katz, and between them they persuaded Chas Chandler* that the short tour should begin at the Isle of Wight before continuing to Denmark, Sweden and Germany. Following a celebratory opening party for the Electric Lady studios on 26 August, Hendrix had delighted in testing out its recording possibilities, laying down the instrumental known as ‘Slow Blues’, which reflects some happy moments. He was itching to do more recording.

A day later, Jimi Hendrix flew in – first by Air India and then light aircraft. He arrived in a state of some trepidation. He had been away so long that he feared Britain would have forgotten all about him. On August 29, he told Melody Maker’s Roy Hollingworth: “I’m back right now to where I started. I’ve given this era of music everything. I still sound the same, my music’s still the same, and I can’t think of anything new to add to it in its present state…I just wanted to go away a while and forget everything. I wanted to just do recording, and see if I could write something.”

Hollingworth noted that Hendrix was brimming over with plans: “His mind is six months pregnant with ideas.” The creation of a big band that he could conduct and write for and incorporating classical music were among Jimi’s new ambitions. “I dig Strauss and Wagner – those cats are good, and I think that they are going to form the background of my music. Floating in the sky above it will be blues – I’ve still got plenty of blues – and then there will be western sky music, and sweet opium music – you’ll have to bring your own opium, and these will be mixed together to form one.”

Hendrix pondered his concerns and shared such thoughts as he tried to loosen up with fellow musicians in the glacial blackness at Afton on that newborn Monday morning, August 31. He loped about backstage taking it all in, the big fires, candlelit faces, cider, joss sticks, and so many different smells – the rich loamy soil, grass (both kinds), marijuana, piss, shit, vomit, hotdogs and body odour. It was a freakish moment of anticipation. The sheer volume of numbers was pressing, compressing – electric shock treatment for the nerves. “A lot of us hung out at night by the campfires backstage at Isle of Wight,” reported artist Ford Crull, then 17 and a stage-hand. “Jimi and Miles Davis were around one, talking about working together – my friend heard them. Jimi wanted to be taken seriously as a musician. He didn’t want to play the guitar with his teeth…I think his handlers were almost forcing him to cash in, and he wanted off.”

It finally began – the slow start (described with a fuller account of the set in Chapter 1). Ronnie and I, stressed out by too many delays, began to breathe again. Six numbers in, after ‘Lover Man’, and Jimi was at last in his stride and he re-introduced himself. “OK, we’re gonna start all over again. How’ya doin’ England? Glad to see you. We’ll do this thing called ‘Freedom’.”

*Former Hendrix manager, but still involved. In 1966, it was Chas Chandler who discovered Hendrix in New York and brought him to Britain.

The beautiful, black ‘fiery angel’ appeared gaunt and ragged – more Holy Ghost than high priest, but the other two members of the trio were faring better than the ethereal Jimi. Mitch Mitchell had his drum kit installed up front, plum centre of the stage, just like Keith Moon the previous night, and featured strongly with most of the lighting aimed in his direction. Mitch was dead snazzy, in canary yellow flares, a patterned top with girlish shoulder straps and matching bandana to restrain his crazy blonde locks. He pounded the drums, providing a good deal of the show’s energy. Mitch had drummed for Jimi at Woodstock, but now, slimmed down to a three piece (the five piece at Woodstock included rhythm guitar and bongos), he felt things were looking a lot better. “The band with Jimi and Billy and myself I’d say from a musical standpoint was the best band that we had with Jimi.” Mitchell’s appeal varied from excellent to dull, depending on how much one appreciated extended drum solos – some of which were due to Jimi disappearing behind the amplifier stacks to check his costume or sound issues (some said for imbibing drugs but without any evidence or eye witness accounts to support the allegation).

Afro-ed Billy Cox, dressed modestly in a blue-violet shirt and black leathers, stood anchored for the two hours, reliable and dutiful, his solid bass foundation helping to hold the performance together. Cox sensed the crowd to be overwhelming. “It was monstrous. Even though we couldn’t see – it was night-time – it was by lights…and more by audio than by video. We heard it. It was humongous. You know, we heard it. I’ve read the specs and they say 600,000 people were there. You know Woodstock was 300,000. That’s double Woodstock.”

Sitting anxiously in the press arena was our family dentist, Miles Oldershaw.

“I watched with horror, during ‘Foxy Lady’, as he played the guitar with his teeth, fearing from then on that I would be the one that would shortly be called upon to fix them.”

If Jimi was stressed and hamstrung by the yoke of his fame, including whatever medication came with it, it was a successful and momentous set – a moving showing from the man with the guitar who quit the stage with few words. “Thank you very much. And peace and happiness and all the other good shit.”

The DJ’s chilling announcement followed all too soon, accompanied by plumes of white smoke. “We have a fire on stage. If there’s any firemen anywhere in the area that could help put the fire out as soon as possible.”

Ray Foulk’s books are available from Amazon, Waterstones, and other major retailers. Get 25% off with the code iow25 at Medina Publishing.

Foulk’s new exhibition, the Isle of Wight Festival Experience, will be on display at the Portsmouth Guildhall until October 2017. Tickets are £3 / £2.50. Click here for more information.