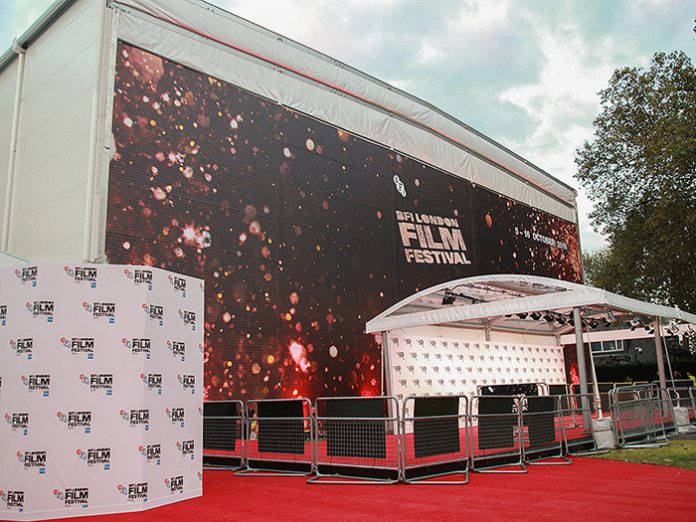 People Creative’s Tim Elliott was the project director on behalf of the BFI, with Arena Group’s expertise called upon to support the design process, then complete the logistically challenging installation, particularly mindful of its duty of care working in the busy, environmentally sensitive Embankment Gardens.

In addition to the main cinema, a 5m x 25m red carpeted press walkway ran along the front of the venue, with a 5m x 10m covered VIP media reception structure leading to the box office and hospitality area, which was built using a 15m x 20m Arcus structure.

Claudia Connelly, People Creative’s project director, said: “We were delighted to win the competitive pitch and with just a nine-week lead time, it was imperative we chose the right suppliers to help deliver our vision of a cinema that wouldn’t feel temporary. From luxury seating to Dolby 7.1 surround sound, 4k digital projection onto a 16 metre wide screen were all elements that helped to surpass the viewing experience even from the UK’s permanent cinemas.

“Having a longstanding relationship with Arena Group built up over many complex projects resulted in the BFI being impressed with our collaborative design approach maximising the space available and enhancing the audience experience.

“All of our industry partners, including Phil Bish and his team, worked tirelessly to deliver the project in a very tight timeframe, remaining incredibly good-humoured even when working against the clock.”

Phil Bish, Arena Group project director, said: “The temporary cinema installation was a unique project for Arena Group, and it was a pleasure to deliver such a unique structure. From using our new I-Novation system to our high-end Diplomat seats, every measure was taken to ensure that the Embankment Garden Cinema provided guests with the surroundings synonymous with a permanent structure.”