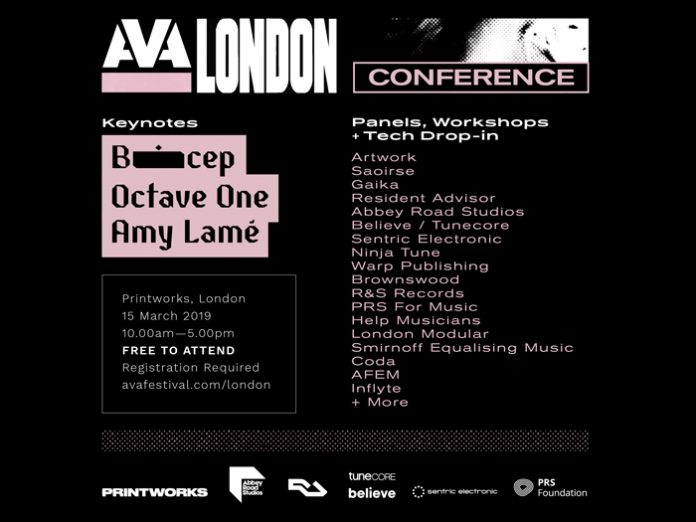 UK: AVA Festival has revealed additional names for its free conference programme at London’s Printworks venue on March 15. The conference will offer insights into the music & arts industry from artists, agents, labels and innovators. Bicep, Octave One, Abbey Road Studios, London’s Night Czar Amy Lamé, Resident Advisor, Ninja Tune, Artwork and more will appear in the line-up of panels, workshops and keynotes, alongside some of the industries’ most notable names and brands.

Split between a free daytime conference at The Printworks and a ticketed club show with Mall Grab, Hunee, Joy Orbison, and more – 2019’s edition promises to be the biggest yet.

Returning to Printworks after a sellout string of live shows last year are two of Belfast’s most notable producers and DJs, Bicep, for an extremely rare Keynote with the The Irish Times’ Seamus O’Reilly. Attendees can expect an in-depth insight into the creation of their hugely successful debut album, from concept all the way through to the artwork, and how they translated this into a live international touring show and beyond.

London’s Night Czar Amy Lamé will have a comprehensive discussion with journalist Lauren Martin on how she is moving the conversation forward around the nighttime economy. They will discuss the progression of her role and the impact it has had on the capital’s music industry.

Longstanding institutional recording studio Abbey Road will join the programme as they examine how the world’s first purpose built recording studio is continuing to innovate production in 2019. The studio team will look into the historical recording process timeline and how technology has advanced over this period, and what to expect for the future.

Joining Bicep as the closing keynote of the day are Detroit techno trailblazers Octave One. The brothers, who burst into the scene in the 90s, have since paved the way for techno musicians – with their 2000 hit single ‘Blackwater’ selling one million records worldwide. Their keynote will give a clear look into how they have developed as artists over the decades and how the scene has changed, as well as discussing their new AV show.

Standing at the front of the royalties and sync industry, PRS for Music will also join the line-up, focusing on the topic of artist development. From labels and publishers to collection societies, managers and booking agents, the panel will discuss the different people and organisations aspiring musicians need to work with, featuring experts from Warp Records, Ninja Tune and booking agency Coda.

Key players in the distribution industry, Believe, will sit down with London based label Brownswood and staple dance music label R&S Records in a roundtable discussion focussed on the ‘Role of Record Labels in 2019’. They will examine the current industry climate, its future and how to stay relevant with so many competitors.