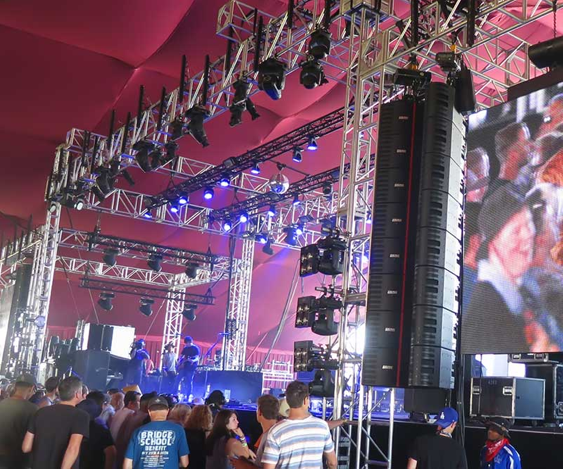 USA: Rat Sound has been providing sound reinforcement for Coachella since 2001 when the festival was in its infancy. This year the Camarillo, California-based sound company deployed EAW’s Anya line arrays at two of the tents – Gobi and Yuma – to ensure attendees receive the best festival experience possible.

“The Anya systems worked very well – we received a lot of compliments on the clear, hi-fi sound,” explained Dave Rat, owner of Rat Sound. “This was the second time we used Anya in the Gobi tent, the first time for Yuma. The adaptive control of the system allows us to minimise reflections off of the walls of the tents which keeps the sound really clean – I was quite pleased with the outcome.”

Since its inception in 1999, Coachella has grown into a two weekend event that features non-stop live music on two stages and in four tents on the grounds of the Empire Polo Club in Indio, California.

The Gobi tent was approximately 18,000 square feet with an expansive stage set up at the far end of the tent. Gobi, known for its eclectic mix of alternative bands, had a line-up this year that included Kimbra, Lights, FKA Twigs, Cahsmere Cat and more. Two Anya arrays, made up of eight Anya modules each, were hung to the left and right of the stage to provide clear, even coverage to the area.

The Yuma tent – complete with wooden floors and air conditioning – is the EDM capital at the festival, drawing some of the biggest names in the business. The tent is oval shaped, roughly 133 x 198 feet with a large, elevated DJ booth in the centre of one of the longer sides of the oval.

In this situation Rat utilised four stacked Anya arrays to immerse the dance floor in sound. Each array was made up of a total of five Anya modules. The inner column was stacked three high, while the outside used two. Two of the arrays were placed to the left and right of a large, elevated DJ booth. The other two were placed on the opposite wall parallel to the booth. Each of the arrays were placed on top of platforms roughly 5 feet off the ground.

“The visiting engineer’s response to both systems was good,” added Rat. “Most of them had heard of Anya but never mixed on it, so they were intrigued with trying it out. The system came up and sounded great — which is what an engineer wants for a live show.”

Each Anya module includes 22 highly customised transducers: 14 HF compression drivers provide a continuous line of apertures on a horn that expands to fill the entire face of the enclosure, six 5-inch MF cone transducers combine with Radial Phase Plugs and Concentric Summation Array technology to sum coherently with the HF wavefront, and dual 15-inch LF cone transducers employ Offset Aperture loading to extend horizontal pattern control well into the lower octaves. Each of the 22 transducers in an Anya module is powered and processed independently to provide extremely high resolution and control. Anya is designed from the ground up to direct outstanding and consistent audio precisely where the user needs it in all three dimensions – and nowhere else.

“This was an interesting opportunity to A-B systems from tent to tent,” added Rat. “I’m impressed with how good Anya sounds and how easy it is for engineers to adapt to.”