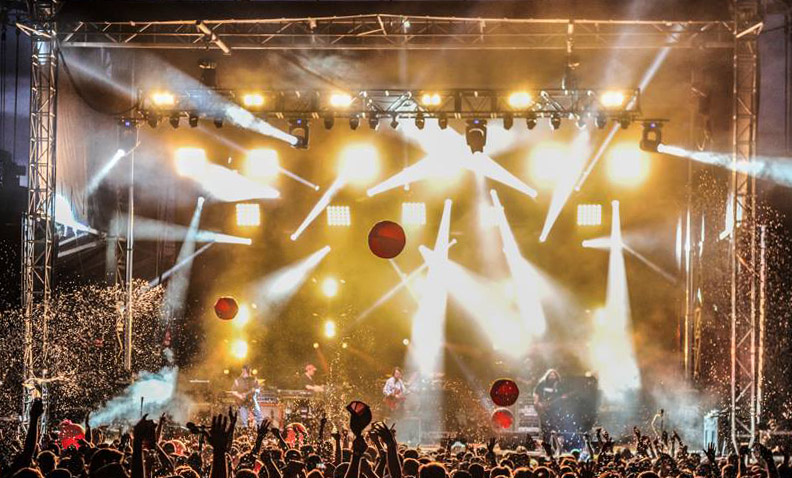 USA: Bandit Lites continued its summer of festivals with the Forecastle Music Festival, an event produced by Hadden Hipsley of Lambda Productions that drew 60,000 music and arts fans to Louisville’s waterfront from July 17 – 19. Artists on the line-up included Sam Smith, My Morning Jacket, Widespread Panic, Modest Mouse, Cage the Elephant and The War on Drugs.

Utilising the gear around the needs of the headliners, Bandit Lites’ Dizzy Gosnell created a design that would provide striking looks both during the day and in the evening.

“Sam and Widespread bought a couple of things with them to hang, but My Morning Jacket’s touring system was so close to this system that they were fine with what we sent along,” said Gosnell. “The almost obligatory BMFL’s and GRN moving wash units did the heavy lifting with Sharpys, Atomics and Matrix 5×5’s adding spice and effects.”

The main challenge for the event turned out being the only thing out of anyone’s control: the weather. With reports of heavy rain, lighting and high winds coming in, the 20,000 people safely evacuated the festival Friday evening during Sam Smith’s set. Fortunately, even with high winds and rain, there was no water damage the next day for My Morning Jacket’s set.

“The Bandit crew onsite did a fabulous job of updating me and observing and reacting to bad weather procedures,” said Gosnell. “Richard Wold, Paul Dalen and the rest of the Lambda management did a fantastic job of making contingency plans and decisions based on the latest weather info. We did the four main stages at Firefly the other week where 90,000 camping fans were evacuated calmly within 45 minutes, all the while singing ‘Bohemian Rhapsody’ on the way out! That’s how it’s done!”

For more information on Bandit Lites, check out its official website.