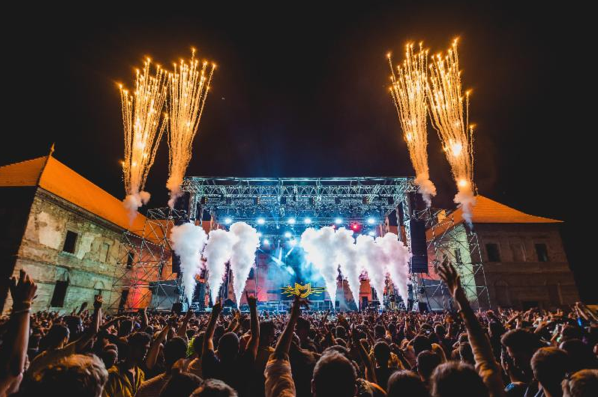 ROMANIA: Showline SL NITRO 510C strobes made their debut on the third edition of Electric Castle, Romania’s biggest music festival, becoming the first LED strobes to be used on the event in its short history.

The award-winning dance festival once again took place in Bánffy Castle, a 14th century monument in the Romanian village of Bonțida. Twenty-two of the powerful Showline strobes, supplied by ASC SYSTEMS, were an integral part of the main stage rig, where such big name acts as The Prodigy, Rudimental and Fat Boy Slim performed.

“We’ve been suppliers to the festival since its first year,” said ASC SYSTEM’s Raluca Dumitru. “This year several of the lighting designers asked for LED strobes in their brief and so we chose to invest in the SL NITRO 510C. We were confident in our decision on account of Philips’ fantastic reputation for high quality entertainment lighting products.”

The SL NITRO 510C has a tightly packed array of 264 high power white LEDs and 264 RGB LEDs. These ensure maximum output for traditional white effects as well as an almost infinite choice of color, with full field and even distribution across 120°.

“Electric Castle was the first time I had used the SL NITRO 510C and I found it a good replacement for a conventional strobe,” said Stephen Abbiss, lighting designer for Fatboy Slim. “The size is comparable and the output similar.”

The SL NITRO 510C’s six zones of control allow for ultimate flexibility and a wide range of effects. Dumitru comments that thanks to their low power consumption, they are also “far more efficient than conventional strobes.”

“We believe that in the future LED strobes such as the SL NITRO 510C will replace the classic Xenon models,” said Dumitru. “They are particularly good for festivals and it is highly likely we will be supplying them to Electric Castle again next year.”