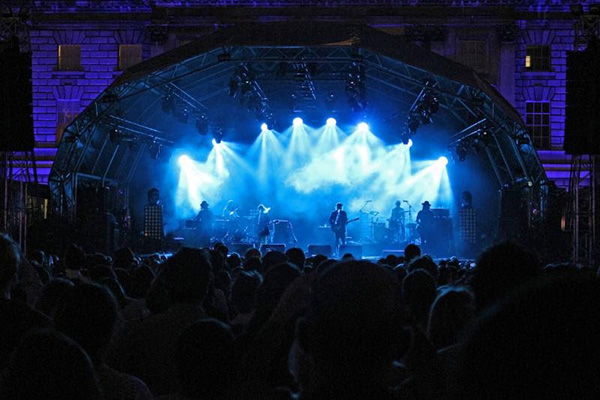 Set in one of London’s most iconic landmarks, Summer Series featured a diverse and impressive line-up of headline artists alongside hotly tipped emerging acts. As house desk for the 11-day series of performances, Arena was used by the likes of folk duo Angus & Julia Stone LD Toby Hoggarth, while George Ezra, lit by John Barker, also employed an Avolites set-up.

The Arena combines the popular interface of the Tiger Touch II with more live control than ever before.

The Arena also comes packed with 40 faders, each with electronic legends, for speedy access to all playbacks, fixtures, and palettes. An in-built managed network switch makes networking multiple devices simple and reliable.

This was the band’s third appearance in London in a year, and as their sound and fanbase have grown, so too has their lighting set-up. Hoggarth’s rig for the show included eight Chromlech Jarags, Clay Paky B-EYE K20s, and five 2-cell moles, to complement a house lighting rig that included eight K20s, six Mythos, 16 GLPX4s, 18 K10s, twelve Alpha spots, 48 Thomas bi light blinders, and 12 atomics, designed by Petter Skramstad.

“Thoughts on the Arena? Well it is obviously an advantage having the extra set of faders, and the LCD legends are useful too!” said Hoggarth. “I’ve been using V9 on my usual Mobile set up, and it’s working brilliantly for me. Unfortunately, due to time constraints on the current tour, I’ve not had a chance to fully explore the Key Frame Shapes function, but I can’t wait to try it out, as from what I’ve seen you can build great combinations of effects in very little time, something which up until now has been very difficult, not just on Avo desks but others too.”

Huw Llewellyn, House Lighting Technician for Somerset House, was excited to be among the first to use the new console, having used the Sapphire Touch on the Summer Series in 2014.

“The Arena’s extra faders are just brilliant,” said Llewellyn. “And with the new software, even without motorised faders, you can change page virtually, without affecting the fader underneath.

“The second screen really comes into its own, especially with the encoder pots. I used them to do rate masters as well as tap tempo, and they were brilliant. People will find ways to use those that Avo never thought of!”