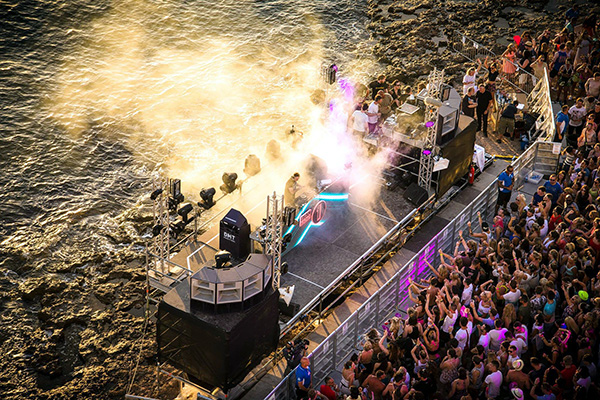 SPAIN: Way back in 1995, the bosses at BBC Radio One gave the go ahead to what would become a legendary yearly pilgrimage to the summer dance capital that is Ibiza.

Starting out with a 120-minute single set broadcast live at 2am from then dance DJ Nicky Holloway, to full on 24/7 week long streaming extravaganza, the BBC has been reporting from and backing dance culture on the ‘White Isle’ ever since.

With this summer being the 20th anniversary of its initial live broadcast from what was then Manumission (now known as Privilege), the venue may have changed many times, as well as the DJ line-up, but the constant throughout has been the pursuit of the very best in dance music, coupled with the highest technical standards for audio.

So back to the present day and the BBC were keen to celebrate the 20th summer of dance in some style back at Cafe Mambo this year, complete with its amazing sunset views over the bay.

XTA have been delighted to be an even bigger part of this year’s dance season with the introduction of the APA – Adaptive Processing Amplifier – making its presence felt across the island.

Following on from the undeniable success of the Space opening party early this summer, using five amplifiers to power the entire outdoor party area (totalling 100kW) the dedicated team at DMT AV Production, based in Ibiza, were keen to get APA involved again, and the BBC were happy to agree.

Olly Wayman, Managing Director of DMT, explained how high profile this event was for both the BBC and DMT: “Not only was there a live audience of clubbers into the thousands, but Radio One were broadcasting the entire party live on Saturday night and online via iPlayer (the BBC replay service) so we couldn’t afford anything to go wrong!”

Funktion One – a name synonymous with dance music systems – were the speaker system of choice, and APA was used to power the entire system, along with XTA DS8000 splitters to provide feeds for front of house, monitors and the BBC broadcast feeds themselves.

The main system consisted of eight of the recently launched new Evo7 boxes with twelve F121 Subs and a pair Res2SH fills. A single delay was set up with two Evo7SH, an F215, and two more F121 subs. This system was controlled and driven by 5 APA.

Also in use were the mammoth PSM318 DJ monitors, driven by an MC2 E100 and E90 combination and controlled by an XTA DP224.

Richard Fleming, who enjoys a trip to Ibiza as XTA’s resident dancer (and part time sales and applications support manager), was on hand to help with setup and configuration.

“The pressure was well and truly on this time. With only an hour until kick-off, we still had no power and hadn’t been able to soundcheck. Luckily I was able to edit all the required configurations back at the warehouse and we could just load them into the APAs via a USB stick. Total lifesaver.”

With the power finally turned on (with the DJ staging operating virtually in the sea – some additional earth leakage breakers were required which was the cause of the hold-up), everyone held their breath as the time of the live link-up approached.

A collective sigh of relief could almost be heard as Radio One DJ Annie Mack took to the stage and started the early evening’s event rolling. With such dance luminaries as Erick Morillo, the BBC’s very own Pete Tong, and surprise appearances by Eric Prydz, and Gregory Porter, it was a non-stop party on into the small hours celebrating the great and the good in dance from the past 20 years, and finishing with a live set from Rudimental.

The last word goes to Mr. Wayman: “APA is fast becoming my choice as the best sounding amp to be partnered with the most precise, accurate and powerful speakers such as Funktion One’s latest Evo systems. The levels and audio quality achievable with so few boxes is astounding: this is a killer combination! We couldn’t have hoped for better sound, and the APAs have yet again performed amazingly.”

For more information on XTA, check out its official website.