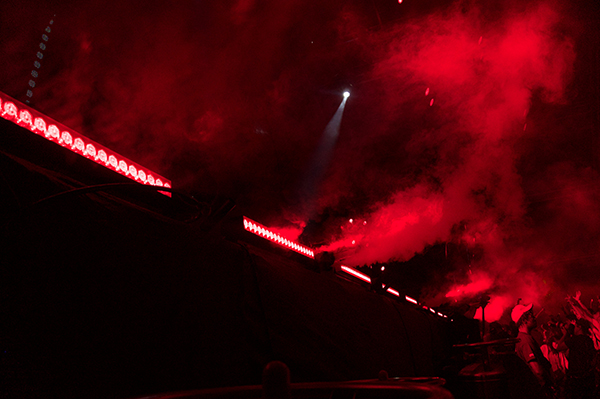 GERMANY: GLP’s latest X4 generation of premium LED fixtures made its festival debut at the pre-eminent Coachella Festival in Indio, California, recently — where over two weekends the Sahara Tent hosted an all-star line-up of DJs.

Drawing inventory from PRG (as well as his own hire fleet) Shimamoto made an inspired Coachella ‘debut’ — to the delight of the immensely packed tent.

“The challenge was to provide a design that was sufficiently interesting to play well during the day as well as be impactful and bold at night,” he recalled. Utilising three tiers of circular video screens, he gave the audience a unique forced perspective that helped give the space significant depth and immersion. With sound as its main theme, hanging high above the centre of the tent was a large inverted speaker cone chandelier complete with a massive mirror ball.

“We also use a lot of LED for EDM,” he admitted. “The harsh repetitiveness in the music requires keeping a beat by coupling to the fast pulse and reaction time of LED’s, which prove reliable in a very constraining outdoor dust covered environment. I also like to use a lot of tungsten as I feel that EDM music has a lot of warm moments that I can pull from warm tungsten based units.” By matching products from GLP’s X4 family he was able to maintain consistency throughout the rig.

Matt confirms that since their initial purchase of impression X4’s in 2013 the demand for the product has never slowed, and they have regularly appeared on a range of events, including top live television shows, concert tours, festivals, corporate events, and feature films. Recently he became one of the first US companies to invest in the X4 Bar 20.

In the Sahara Tent the impression X4’s were sprinkled throughout the rig from upstage, and right out into the house past FOH. “These were the main wash source throughout the tent while the Impression X4 XL was showcased on our articulated motion controlled automated truss, creating new dynamic levels throughout the show,” he said.

“Their large face and cannon of a light carried incredibly well during the day as well as at night. LD’s coming in with various acts loved how easy they were to operate and how quickly they could start turning out stunning and impactful looks, while we also used the X4 XL’s for shin kickers.

“The X4 Bar 20’s were used on the Downstage edge — playing towards the audience by day as mid-air effects, while at night, when the headliners brought out various artists to accompany them onstage, we were able to zoom out the X4 Bar 20’s lenses and colour correct for camera. This alone made having them on this stage well worthwhile.”

And versatility had been the central driver in Shimamoto’s original purchase of the advanced battens. “If a light can uplight a wall or scenic piece, be used onstage as eye candy or used to fill in on camera then we are all over it.”

In summary, the production designer states, “We rarely have any issues with reliability on the GLP products. They’re dependable workhorses that I can put in somewhat hard to reach places. Their output and optics are incredible and we have been able to use them for key light on camera without having any colour or flicker issues.

“At Coachella, we received nothing but great feedback from the artists and teams that played on our stage. Our goal was to make an environment that was inviting to each artist’s visions and goals. From a first class previz system provided by EarlyBird to our FOH system designed by our lead lighting director Aron Altmark we were able to offer incoming designers and directors a solid place to create in.”

For more information on GLP, check out its official website.