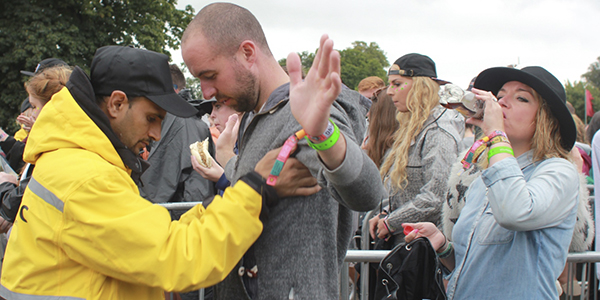 UK: Showsec has been commended for its part in making V Festival’s 20th birthday a safe and memorable one in Staffordshire.

The crowd management and event security specialists mounted an extensive operation with the emphasis very much on delivering a safe and enjoyable environment at Weston Park to ensure that it was a special birthday party for all V fans.

A crucial element of the operation was Showsec’s close liaison with Staffordshire Police, which maximised the impact of crime reduction measures, while its specialist services were enhanced by the rollout of a new training programme.

That had the desired effect as the likes of Kasabian, Calvin Harris, Sam Smith and The Script were among those to headline the celebrations.

In declaring this year’s event a resounding success, festival organiser Andy Redhead focused on the significance of all the agencies and services working together seamlessly to create an experience which certainly lived up to expectations.

“It’s been a hugely successful event for us at Weston Park once again this year,” he commented. “That’s by no small effort from all the agencies and services involved in supporting us in the organisation and running of the weekend.”

Superintendent Elliott Sharrad-Williams, Staffordshire Police’s lead event Commander, highlighted the effect of their liaison with Showsec in echoing those views and pointing to another satisfying outcome in terms of crime statistics.

“Crime has again remained low with only 70 crimes reported,” he said. “There has been an increase in the number of arrests, 30 people compared to 19 in 2014, but that was for a variety of offences due largely to the proactive work of the security team, and both uniformed and plain clothed officers working with them.

“This has been a real team effort. Event management, security teams, and dozens of other partners have worked together to make the weekend such a safe and successful event. We are very pleased with this year’s policing operation.”

Showsec identified that its much-acclaimed Crime Reduction Strategy could have an even greater impact at V Festival if they increased the range of skills and knowledge of its workforce for those specific operations at Weston Park.

In an ongoing commitment to raising its standards of service, the Company introduced modules to provide standardised training in three specific areas of crime reduction, namely Enhanced Search, Incident Response, and Ejection Centre.

“Crime reduction now forms part of the core duties at festivals and is instrumental in keeping the audience, client, and staff members safe,” commented Mark Logan, the Showsec Director who was Head of Security at Weston Park.

“By undertaking these modules, each and every staff member is not only helping Showsec to provide a higher level of service, they are also enhancing its ability to reduce crime and make them a more versatile asset to the Company.”

“We had 1,400 staff working on site across the weekend and almost 25 per cent of them had completed all three aspects of this specialised training before the festival, putting us in a much stronger position to take our Crime Reduction Strategy to a new level in terms of the impact which it can have on these occasions.”

He added: “We worked in partnership with Staffordshire Police and the promoters to deliver a safe and fun-filled weekend for all.

“Despite the rain, thunder and lightning, everyone managed to stay focused on providing a strong service with the customer’s enjoyment at the heart of it all.”

Logan could draw on the support of a strong management team across all areas of the operation at Weston Park and this ensured that leadership on the ground provided a high level of direction which was reflected in the overall performance.

Ieuan Fury, Showsec’s Area Manager for the West Midlands, Project Manager at V Festival, stated: “This was the third year that we have provided our crowd management and security services for the West Park event.

“This was our most effective, most successful year yet. A significant reason for that was that we used the experiences of previous V Festivals as a learning tool in ensuring that the service level improves its quality year-on-year.

“The trends of past events have an influence upon our crime reduction measures and we hand pick Supervisors to ensure they have the knowledge, experience and qualifications as additional support for the Crime Reduction Strategy. These Supervisors are then able to feed their knowledge to stewards and SIA staff within their teams.”