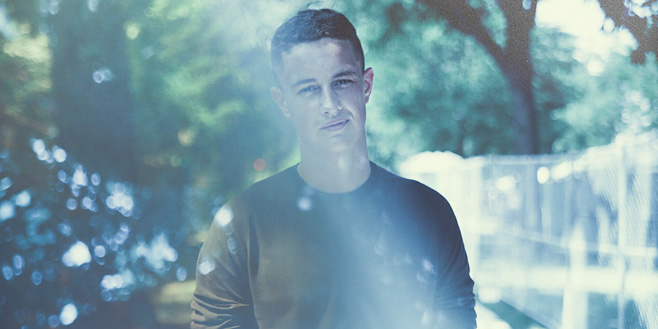 UK: Evian Christ, electronic music producer and Tri Angle Records-signee, was detained by Leeds Festival security shortly after his performance on Friday August 28. The finer details of his temporary imprisonment have been a matter of contention between the Ellesmore Port-born trance artist and Reading & Leeds organiser Melvin Benn.

The story initially gained traction after Christ posted a video from his immediate enclosure to Twitter, accompanied with the hashtag ‘#freeevian’. Although some were disheartened to learn that it wasn’t a promotional campaign for complementary bottles of mineral water, many were incensed with the ostensible injustice of the whole debacle, and demanded a response from Reading & Leeds. Since then, Reading & Leeds promoter Melvin Benn has issued a statement clarifying the organisation’s standpoint, detailing a series of events that Christ has contested in a lengthy and vitriolic response.

Benn said: “Evian was found in a not very good state in the woods, without being able or willing to disclose who he was. He was effectively held till we knew who he was. He certainly wasn’t prevented from performing [at Reading] under any circumstances. It was his decision not to perform, not the festival’s.”

Selected excerpts from Christ’s statement are as follows: “was involved in a strange incident at leeds festival this weekend which ended up in me being detained inside a cage…

“leeds fest, friday. after making sure blaze kidd + uli-k (who are performing with me) have got in a taxi home, i set about finding my own car so i can do the same. the artist car park is backstage and the festival layout is sprawling, so after being sent backwards and forwards by security staff i finally give up and ask one of them to call me a car to take me back there. the driver takes issue with me immediately and removes the pass im wearing that identifies me as a performing artist, asks my name (“joshua leary”) and then tells me that my pass says something different (“evian christ”). i inform him that evian christ is my artist name, and that i also have a real name, but he appears unsatisfied by this explanation and keeps the pass

“we drive past the artists car park and i identify my car (in which i have family waiting, younger brother etc), the security ogre grunts and bizarrely proceeds to take me to some weird area with a cage. i am detained in this cage and told that i am being held under suspicion of trying to “break into the festival without a ticket” – i remain here for a Very Long Time. the security guards seem to think i am there for their amusement, and a few times i am threatened with arrest by a police officer, once for saying “for fucks sake” into the distance, another time for “knocking a chair over”. i am informed that i will remain detained in the cage indefinitely until i can prove beyond doubt that i am not trying to “break into the festival”. i remind security/police they have removed the pass which i was presumably given for this explicit reason, and i suggest that my attempt to find the backstage carpark after DJing the radio 1 dance stage should be a sufficient indicator of my intentions. they respond that “anyone could have found [the pass] and stuck it on” (lol). later, i ask them to identify me photographically by googling by name, which i think is a good idea, but they have no interest in any potential solution and seem hellbent on winding me up to the point that i might snap and get myself arrested

“at this point i only had a few percent battery so i managed to take a quick video, send some tweets, call my manager and DM Brodinski who heroically tried to #free me to no avail. i “cancelled” reading in an attempt to gain some leverage in the situation but nobody around me gave a fuck anyway and seemed to think it was funny. over an hour afterwards i was set #free by a “more senior” member of the security staff who seemed as bemused as me by the situation. i asked for an apology and was not given one.

“as if this all wasn’t ridiculous enough, yesterday i discovered that reading festival – too busy to respond to my emails trying to sort the situation out – thought it would be funny to create a cage behind the stage i was supposed to play on, labelling it as my backstage area. personally i didn’t find this massively appropriate and overall i feel gutted to have had a terrible experience at a festival i attended twice as a kid and was really excited to play.”

Benn has yet to further address the situation at the time of writing.

For more information on Leeds Festival, visit its official website.