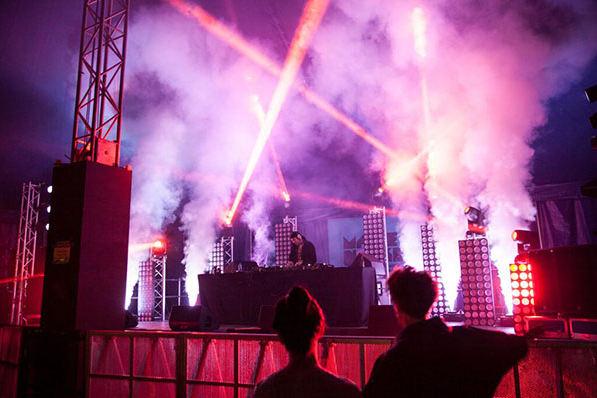 UK: The OnBlackheath festival in South East London has quickly established itself as one of the capital’s most popular late summer music events.

Set on the picturesque Blackheath Common, the two-day gathering features an eclectic mix of live music and pop-up food stalls, an alluring combination that earned it five nominations for the Festival Awards in 2014, its very first year of existence.

This year the festival turned up the juice even more with a new Make Noise DJ stage that featured EDM stars like Erol Alkan and Grammy-winner Tom Findlay (Groove Armada), along with a dazzling array of 28 pixel-mapped Nexus 4×4 LED panels from Chauvet Professional.

When festival supplier London Speaker Hire approached John Rogers to design a lighting concept for the Make Noise stage, Rogers decided that the direction of the design should take on an obvious club persona. “With the stage being devoted solely to dance music, I wanted the lighting to reflect that and make it immediately apparent to you as you approached the tent,” commented Rogers.

Rogers conveyed his dance club messages on stage by arranging his ensemble of Nexus 4×4 panels in a floor-rigged design, then making them come alive with a variety of pixel-mapped driven looks. These intense pixel-mapped patterns, along with the ‘coloured fog’ from six Chauvet DJ Geyser RGB foggers in Rogers’ rig, transformed the stage, giving it an undeniably club-like feeling.

“In terms of looks, I wanted a high-impact fixture that suited pixel mapping and, seeing as I had used the Nexus 4x4s previously, it was an easy decision,” continued Rogers.

“It’s not the first time I’ve programmed and operated with them. They’re really bright and they mix colour very well, especially considering they’re RGB fixtures. The 4x4s are so punchy, at times I had to pull intensity out of them to stop them washing the movers and front lights out.”

Rogers controlled the entire show via an Avolites Quartz console running Titan 9.1 software, which enabled him to make the most out of the fixture’s pixel-mapping features. “The 4x4s are really generous in allowing 3-pin, 5-pin and ArtNet connections, so I knew whatever I decided to do in terms of data runs they’d be versatile and not dictate how I’d have to run my lines,” he said.

As the festival has quite an early curfew, half of the acts were on in daylight. The six Geysers, which Rogers integrated into the set, were by all accounts his secret weapons to creating the desired club atmosphere. “I really relied upon the Geysers to create that murky evening club feel in broad daylight,” he said.

“It’s always a bit of a fight against the daylight at a festival, but the Geysers added a stand-out effect that pulled in crowds of all ages to dance throughout the day. The added bonus of the dense haze filling the tent meant that the lights were always part of the show.”

As OnBlackheath is a family-friendly festival, in the daytime kids could be seen dancing with their parents in front of the Make Noise Stage. At night, however, the stage took on a different persona. Rogers continued: “Once the sun went down the whole mood of the tent kicked up a gear with the Nexus and Geysers delivering the ‘club’ atmosphere that I wanted to achieve.”

Rogers concluded: “Erol Alkan closed the stage on Sunday, and was nice enough to say that the lighting was fantastic after his set! I really had fun designing this lighting concept and I think the Chauvet fixtures were a huge part of making the Make Noise stage stand out across the site.”