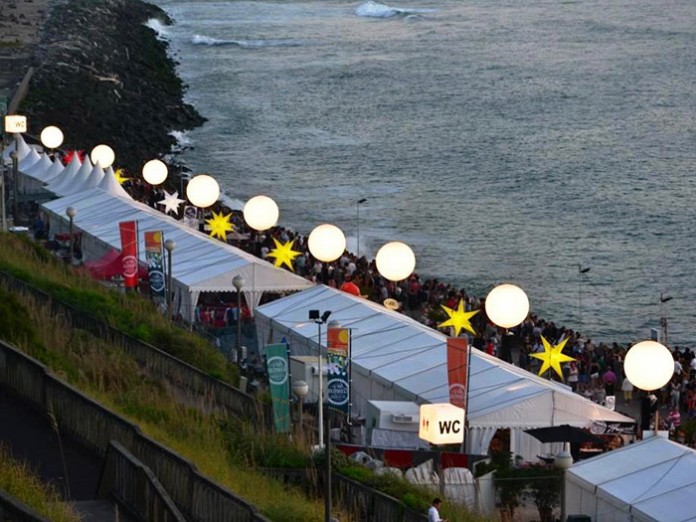 FRANCE: As the festival season recently drew to a close, Airstar has announced that it lit up well over half a million festivalgoers this year. Summer has historically been a busy season for Airstar whose solutions are now in high demand across major international festivals for public lighting, rescue and safety, signage and decoration.

The European Festival season kicked off for Airstar with the Casetas de Biarritz (June 17 – 21). Tucked into the Basque coast of Biarritz between the Atlantic Ocean and the cliffs, the Casetas is a popular cultural event which sees various bodegas and restaurants lining up to welcome up to 6,000 people on a daily basis from noon until late at night.

The organisers chose Airstar technologies to ensure an efficient yet aesthetic lighting of the site. Airstar deployed 20 Crystal 160 and 200 lighting balloons (1.6m and 2m radius) as well as 15 star shaped lighting balloons. Halogen lighting technology was preferred for the spheres while the stars used LED lighting. All balloons were trussed on totems, above the loudspeakers.

Meanwhile, the Fete de la Musique in Berlin’s Mauerpark (June 21) was in full swing. Marko Zander, from the Airstar European Network (AEN) agency in Berlin worked with technical provider audio:visuell to provide two Airstar Crystal 200 fitted on each side at the top of the stage, while two Sirocco fitted with 1kW halogen lamps ensured safety and site maintenance. Airstar, which has been a technical provider of the festival for three years, enjoys a good presence in German festivals, and this year, Melt! Festival used six Crystal in clusters grapes of three balloons on the top of each side of the stage.

Across the Channel, the Airstar London team was busy putting up Crystal lighting balloons at Glastonbury (June 24 – 29), each boasting 4 x 2kW of light eight meters above the ground to direct festival goerstowards the main pedestrian gates. Airstar London Manager, Marc Woodcock, commented: “We managed to reduce installation time drastically this year by putting our balloons on top of a scaffolding tube rather than fitting them on the top of the gates as in previous editions. The result was very effective and people knew exactly where to go.”

Back in France, the Solidays music festival (June 26 – 28) at the Longchamp hippodrome near Paris was in great need of Airstar lighting technology. For this first large scale test of the summer which attracts 180,000 people, Airstar deployed its lighting balloons across the festival site, mainly for public signage and backstage lighting: these included 24 Crystal balloons (130, 160 and 200) for the main areas and single base air-inflated Towair for the VIP area. Five 130cm wide diamond shaped lighting balloons were used to signal the nearest toilets.

Next on the list was Musilac in Aix-les-Bains (July 10 – 13), a true showcase of Airstar festival lighting savoir-faire: 22 balloons from the Crystal range were deployed to light up the firemen access on the lake shores, while the public esplanade and pop-up shops were lit by three Sirocco 4K HMI, allowing a 6,000sqm surface to be lit over 360°. The Bar des Coulisses welcomed VIPs to an art exhibition borrowed from the Lyon Festival of Lights last year, with giant Airstar light bulbs which created a unique atmosphere. The Airstar technical team also decorated the Lac du Bourget with four Délices Moon floating and 10 Délices Pro Rocks on the dock.

The end of August proved a busy period for Airstar who deployed their lighting solutions at the Edinburgh Fringe Festival closing ceremony (August 29) and for the Rock en Seine festival in Paris (August 28 – 30). Up in Scotland, 14 Crystal 160 (with 6 x 400W halogen lamps) marked out pedestrian gates and displayed the festival sponsor’s logo, Virgin Money. In the French capital, Thierry Lavau, AEN Event Manager for the Parisian region deployed 10 wind resistant Diamond balloons for the toilet signs and seven Crystal for the crowd to easily find the first-aid posts.

According to Florent Gatard, Airstar’s Event Sales Director, “promoters today recognise that attendees not only rate a festival by the quality of its line-up, but also by the services offered and how well it is organised to welcome them.” He concluded: “With such a breadth of high quality lighting solutions from security to signage and crowd flux, Airstar has a bright future in the festival market.”