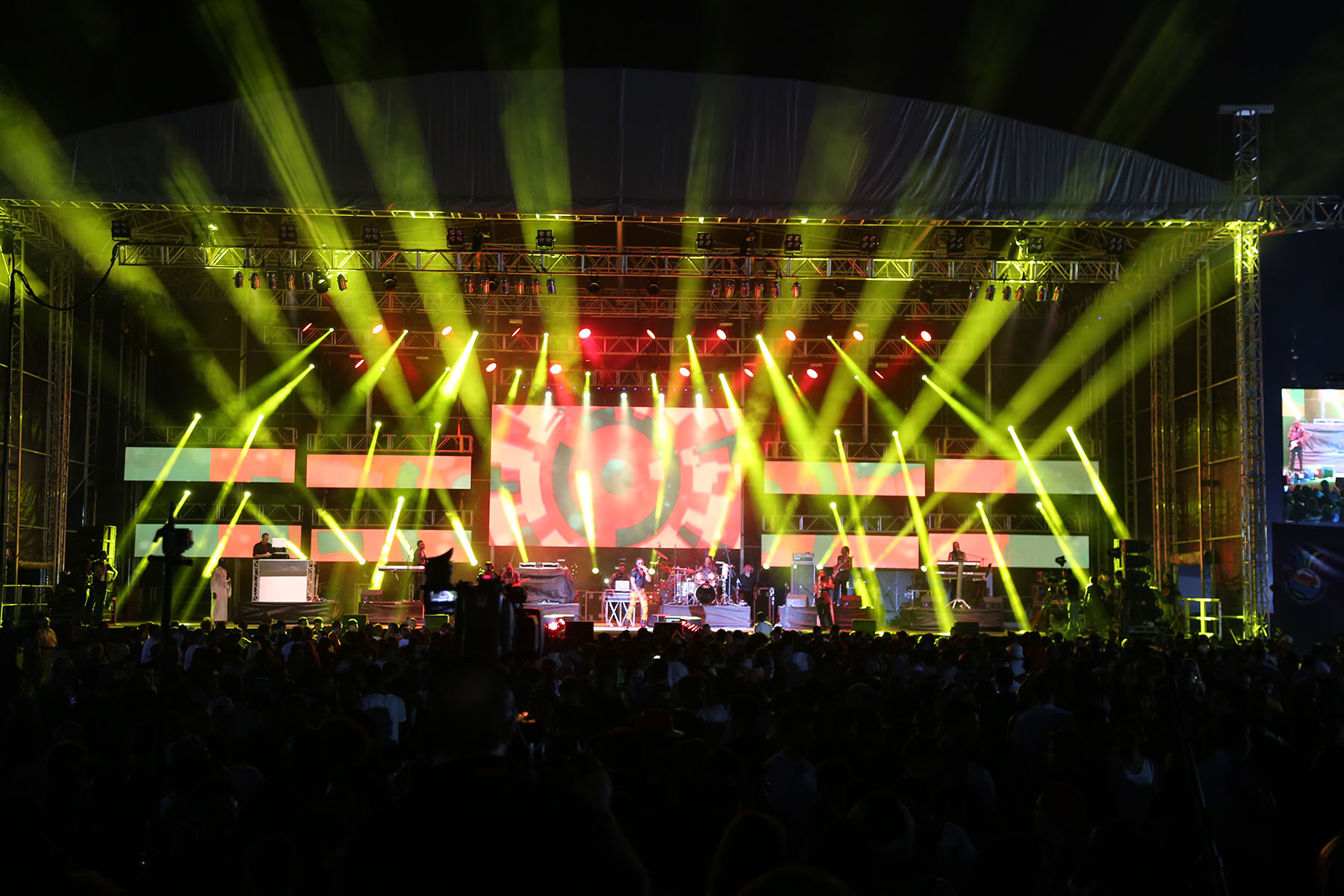 The show was lit by Dubai and UK-based LD Steve Shipman whose design used over 120 Robe moving lights including 12 x BMFL Spots, all supplied by technical production company Solution Media. Steve had also designed lighting for the same show in London in August.

The brief was to design a big colourful show with lots of ‘wow factor’ and eye-candy, so he set to work using the kit that was available from Media Solutions, which included 12 x MMX Spots, 18 x LEDWash 1200s, 6 x LEDWash 600s, 34 x LEDBeam 100s and 40 Pointes, plus the BMFL Spots which were positioned on the floor.

The fully skinned TTL roof system – also supplied by Solution Media and Infotec LLC – had an internal span of 30 metres, 13.5 metres of depth and 10 metres trim roof-to-stage. With no set, this left Steve quite a substantial area to fill with lighting.

Eight moving trusses (on a Kinesys system) were key to the show, all of these were loaded with Pointes and video panels, and there was also a big mesh video screen upstage. Four of the trusses had four Pointes and the other four had six units each. Then there was a standard front-mid-back truss arrangement across which the rest of the kit was divided, apart from the 12 x BMFLs.

A thrust at the front of stage was highlighted by 18 LEDBeam 100s running along its path, with a diffusion filter added to increase the beam spread.

The BMFLs were arranged in a straight line along the back of the stage. This was the first time that Steve had run BMFLs on one of his own designs, although he had used them earlier in the year on a Mumford & Sons Tour (LD Ed Warren) in the UK and Europe which he was crewing.

“They are super bright with lovely big beams – even in the darkest colours,” he said.

He used numerous prism and gobo effects from the 40 x Pointes which are also extremely pokey, freeing him up to use the BMFLs primarily for those massive hi-impact fat-beam effects that blow the hell out of everything.

Steve’s a big fan of the Pointe and has used the fixtures on many shows: “Having forty of them on this really helped in terms of adding dynamics” he recalled, “I love the prism effect and they are great with or without the gobos.”

Lighting was programmed on a grandMA2 full size console, which was also driving content for the 5 x 1 metre video panels mounted on the eight moving trusses.

Akon brought his own LD Brett Lorins, and Steve ran lighting for the others, a scenario where his carefully honed busking skills – a technique developed through varied experiences of large and high profile one-offs in Dubai where he’s been based for 20 years – were invaluable.

Steve hand-picked four lighting crew – Jossy Thomas, Sree Srinivasan, Shane Rivera and Kishore Kumar from Dubai based World Stage Management – to work alongside him on the event and ensure everything ran like clockwork.