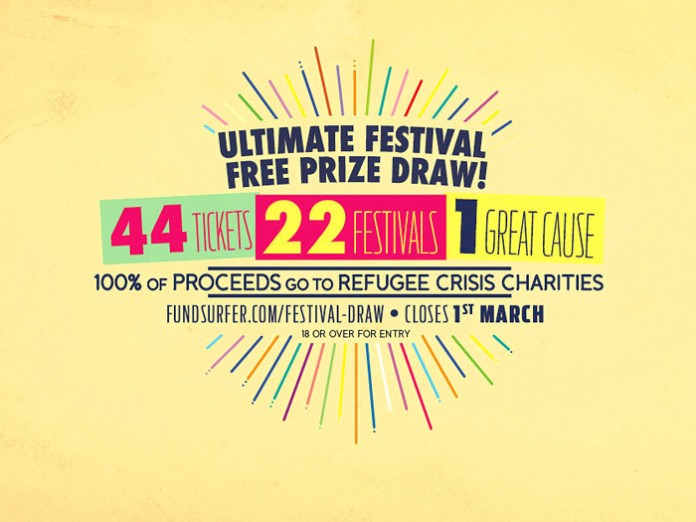 22 of the UK’s leading independent and grass roots festivals have come together with the aim of raising urgent funds and awareness for refugees in Northern France. The festivals, which include Beatherder, Bestival, Beautiful Days, BoomTown Fair, Camp Bestival, Dimensions, Green Man, Kendal Calling, Love Saves the Day, Larmer Tree, Outlook, Secret Garden Party, Shambala, WOMAD, and many more, have all offered up a pair of festival tickets for the Ultimate Festival Prize Draw, offering 22 lucky entrants the chance to win a pair of tickets to one of these incredible festivals for a donation towards the cause.

The bulk of the funds raised will go towards Aid Box Convoy: Bristol, an organisation that has been supporting ‘Medecins Sans Frontieres’‎ (MSF) and other volunteers to help keep thousands of refugees alive through the winter months within Dunkirk’s Grande Synthe camp. Grande Synthe is one of the worst camps in the region, where due to restrictions placed on them by the authorities many are struggling to meet even the most basic needs.

The fundraiser’s page can be found here.

Aid Box Convoy was started by a passionate group of people from Bristol, many of whom have ties to the festival industry and have been on the ground delivering and coordinating aid to get to the people who need it the very most in Northern France’s smaller camps since early October.

ABC’s work has been instrumental in keeping many of the now 3,000 displaced refugees alive in the camps they operate in throughout the winter. Their work has involved appealing to the local councils and politicians to support the camp, as well as providing a consistent presence of volunteers who respond to the refugees’ basic needs and coordinate vital supplies such as arctic sleeping bags, wood, building supplies, fuel for the generator and many other sources to help provide basic levels of human rights.

“We are absolutely delighted to have this support from 22 of the UK’s leading festivals and could not have asked for a better platform to raise awareness of the humanitarian crisis happening on our doorstep,” said Imogen McIntosh of ABC. “It is support like this that not only will raise much needed funds but also has the potential to trigger support from a large number of the UK population.”

Over the past few months people from within the festival community have been pulling together in many ways to help as much as they can: setting up charitable projects, holding fundraising events, actively engaging their vast networks, and sending individuals to France to help on the ground by building shelters or volunteering. A significant difference has already been made but the hope is that collectively, so much more can be achieved.

A refugee fundraising event was held in November and between all involved over £10,000 was raised, sent directly to Aid Box Convoy. However, since then the situation has actually become worse and daily reports from the ground indicate dreadful conditions. After speaking with Shambala, Boomtown Fair decided that if they extended their reach and gathered as many fellow festivals in one massive, combined effort they could raise so much more awareness and valuable funds to hopefully make a real difference.

This situation is urgent and the hope is that the wider festival community will show their support to the organisers and the volunteers out on the ground by donating to the cause, where the chance to win a pair of tickets to one of the festivals involved in the biggest ever combined festival fundraiser ever held.

The fundraiser runs from January 27 – March 1 when entrants will be picked at random and emailed directly. It is one pair of tickets to one randomly selected festival per winner.