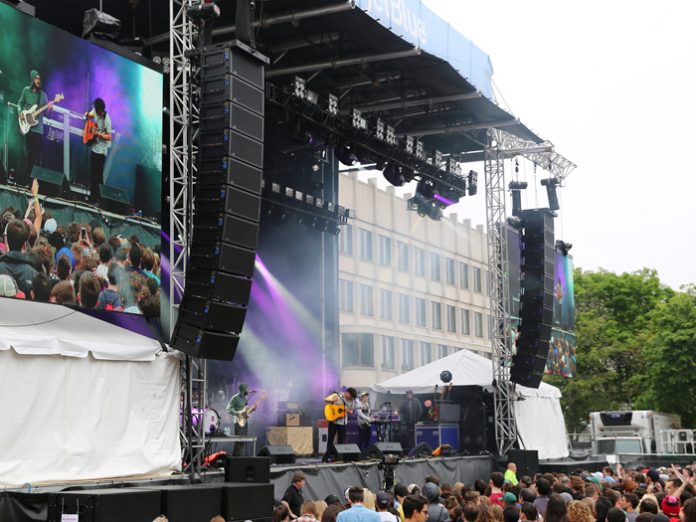 “This was the first year we had the LEO Family on both stages, with LEO on the Blue Stage and LYON on the smaller Red Stage,” said Scott Tkachuk, CTO and touring director for Rainbow. “That combination gave us a lot more control, which was critical as we were surrounded by 60-story buildings of concrete and glass. Those boxes can throw for days, but the critical factor here was precise control. LEO and LYON gave us better coverage with fewer reflections. That was a big win.”

According to Tkachuck, the linear characteristics of the LEO Family were also a good match for Boston Calling’s eclectic line-up. “We had everything from neo-acoustic to alt rock and EDM, and the FOH mixers were all blown away by what they heard, even though some of them had never experienced the LEO Family before.

“The LEO Family has been a game-changer for Rainbow,” continued Tkachuk. “It’s helped us grow as a company by opening new opportunities across all rental markets.”

“LEO is simply the best large-scale system available,” said Tim Humpe, director of entertainment and touring production for POOLGroup. “It’s almost like LEO was made for EDM. It’s always powerful and punchy, yet it never gets harsh, even at very high SPLs.

“We’ve been using LEO for this event for the last three years,” Humpe continued. “Everyone involved was very pleased with the results in the past, so there was no need to change the basic system. We’ve been providing LEO rigs for other EDM shows during that time, and LEO has become the first large-scale system choice for a number of FOH engineers working in this genre.”

One notable addition for 2016 was a stage side fill system of six LEOPARD line array loudspeakers and two 900-LFC low-frequency control elements. The system was specifically requested by headliner David Guetta and used by all other artists as well.

At the one-stage BigCityBeats World Club Dome, the main reinforcement system comprised 28-each LEO-M and LYON loudspeakers and 52 1100-LFC elements in addition to 16 LEOPARD, 20 MICA, and 24 MINA line array loudspeakers, 16 JM-1P loudspeakers, and 12 UPQ-1P loudspeakers. All stages at both festivals relied on Galileo Callisto loudspeaker management systems for drive and precise optimisation.