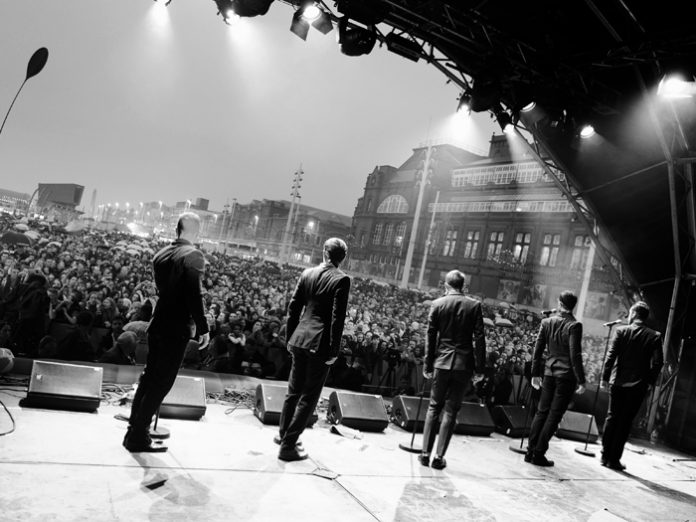 Last year’s Switch-On Festival attracted around 30,000 people to the arena across four events, including two music concerts, a comedy roadshow and a live CBBC broadcast, as well as Hollywood film director Tim Burton turning on the famous Illuminations display.

Details of this year’s line-up are beginning to be announced, with special guest performers and the switch on star set to be unveiled in the coming weeks, while global TV channel Nickelodeon have already signed up to deliver a host entertainment across the resort during the weekend.

As well as teaming up with entertainment brand Club MTV to deliver the Friday night switch on concert, they will also host the UK’s first SLIMEFEST events in the Winter Gardens as well as two free family events at the Tower Festival Headland on the Saturday and Sunday.

REM will be responsible for building the event arena on the headland as well as organising stewards, first aid facilities and all lighting and sound requirements; they will be integral to ensuring that the weekend runs smoothly.

REM has extensive nationwide experience managing a wide range of events of all types and sizes. The company has strong ties with the North West, working on Liverpool International Music Festival since 2008 and were also event managers for Liverpool Capital of Culture and the Cunard Three Queen’s return to the Mersey last year.

Mike Richmond, REM’s Managing Director, said: “We are delighted to be entrusted to deliver this year’s Illuminations Festival Weekend and extend our ties with the North West. Blackpool is the pinnacle of lights switch ons and we are committed to supporting VisitBlackpool in ensuring the best possible audience and artist experiences through creating a high quality production and making best of this fantastic event space.”

Cllr Gillian Campbell, Deputy Leader of Blackpool Council, said: “I am delighted to confirm that Richmond Event Management Ltd has been awarded the contract to provide production management services for the Illuminations Switch-On weekend.

“This is the biggest night in Blackpool’s events calendar, with tens of thousands of visitors descending on the resort.

“Plans for the weekend are well under way with the registration for free wristbands for the Friday now open and Nickelodeon taking over the arena on the Saturday and Sunday with a free outdoor festival to present the UK’s first ever Nickelodeon’s SLIMEFEST.”