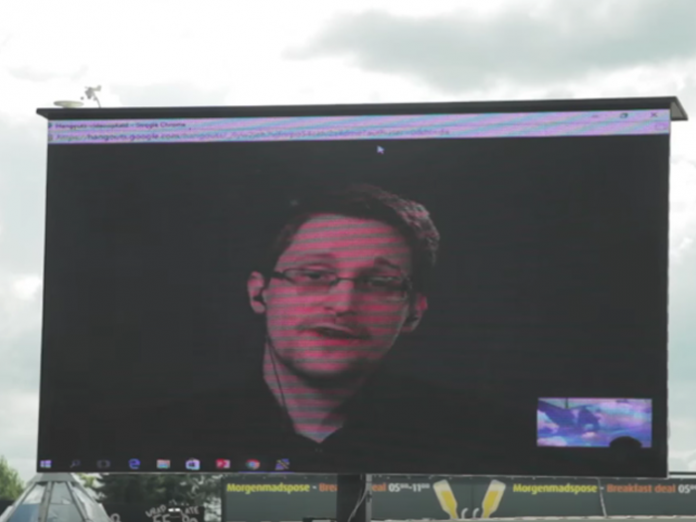 DENMARK: Beyond its music line-up, exotic food, and colourful campsites, a standout fixture of this year’s Roskilde Festival was Edward Snowden’s live interview with activist duo The Yes Men. The famous US whistleblower’s talk – streamed via satellite from Moscow – followed a much debated prank conducted by The Yes Men that involved them setting up fake signs stating that the festival would be collecting and indefinitely storing all text and phone conversations while on festival grounds.

Before the nature of the signs was revealed, many festivalgoers demonstrated both despair and anger. This was exactly what The Yes Men had hoped to achieve with the stunt: to put emphasis on digital surveillance as a topic that needs to be discussed on a much broader scale.

The Yes Men documented the experience and have released a 12 minute film detailing the project, which can be viewed below.

Roskilde Festival’s spokeswoman Christina Bilde says: “We found the idea so exciting because it allowed the festivalgoers to take an active stance. It’s inspiring to see these strong reactions, to see people care so much. More than 4,000 people attended Edward Snowden’s talk, and we hope this film will reach a lot of people as digital surveillance has become such a big part of our everyday lives.”

“This kind of activist art suits us perfectly, and this project reflects how engaged the guests are at Roskilde Festival,” she continued. “It goes to show that we expect a lot from them, just like the festivalgoers demand a lot from us. In my humble opinion, this is a very privileged position to be in, and it’s also a chance to thank everyone who took part in our data project.”

The Yes Men’s project with Edward Snowden is part of Roskilde Festival’s focus on equality and human rights, this year under the headline ‘Stand Up for Your Rights’.

Every year, Roskilde Festival pays special attention to a deserving issue. In 2016, it was equality and human rights, specifically focusing on issues like digital surveillance, the right to privacy, freedom of speech, gender equality and not least, the refugee crisis.