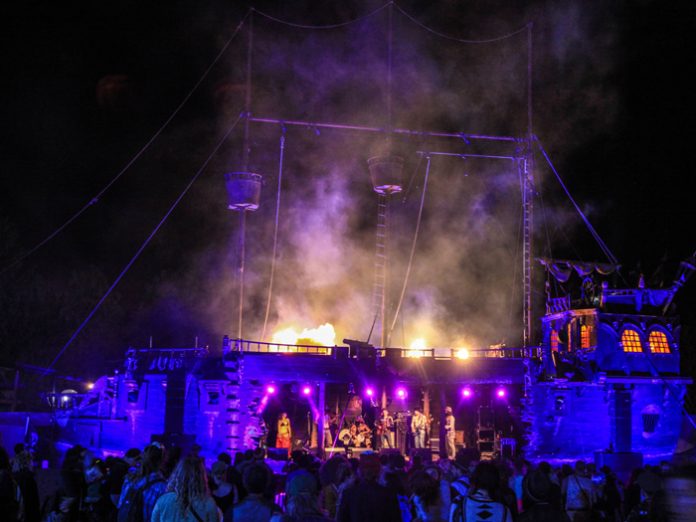 UK: For its sixth year supplying BoomTown Fair, Utopium provided lighting and rigging equipment to 12 of the festival’s stages and venues from August 11 – 14.

This summer’s BoomTown Fair saw the introduction of over 80 street venues and an increased capacity of 60,000, making it the biggest year to date. The fully immersive festival features nine individually themed districts, impressive main stages and an eclectic line-up of music and entertainment with the introduction of Sector 6, a brand new district and witnessed performances from Madness, Damian ‘Jr Gong’ Marley and Fat Freddy’s Drop.

Utopium provided festival lighting and rigging to 12 main stages and venues, which included the Town Centre, The Lion’s Den, The Jolly Dodger, The Old Mines, The Ballroom, Rusty Spurs and Tangled Roots.

To illuminate the prestigious The Lion’s Den stage, which is the largest reggae stage in the country, Utopium used a host of equipment from its existing inventory including Martin MAC Quantum Profiles, SGM P-2 LED Washlights, Chauvet COLORado 1-Quad IP LED Pars and 32 Chauvet Rogue RH1 Hybrids. To enhance the ambience, Utopium also installed lighting to the six towers around The Lion’s Den area, a new addition to the arena for this year’s event which was a total success.

In addition to lighting, control, trussing and rigging for the Festival’s stages, Utopium was also tasked with providing all of the architectural lighting within the Town Centre, to enable the cityscape set to be synchronised with the stage lighting.

Utopium’s Jon Newman commented: “This is our sixth year working with BoomTown, and every year we love the chance to provide something a little bit different for both the stages and the sets. BoomTown is constantly looking to push creative boundaries and it’s great to be part of that. This year we installed lighting and rigging throughout the various districts, and enhanced our offering to The Lion’s Den stage, which produced a fantastic end result. We had a great team onsite, including Will Howie who designed and project managed the installations, ensuring that each was in keeping with the style of the stage and the district it sat within. Will did a tremendous job in the planning stages and onsite, directing his team to deliver the project as specified and on time. As well as increasing the kit and utilising some of our new equipment, Avolites’ Steve Warren also supplied us with The Avolites Arena, its newest console, which suited our team and the touring lighting designers very well.”