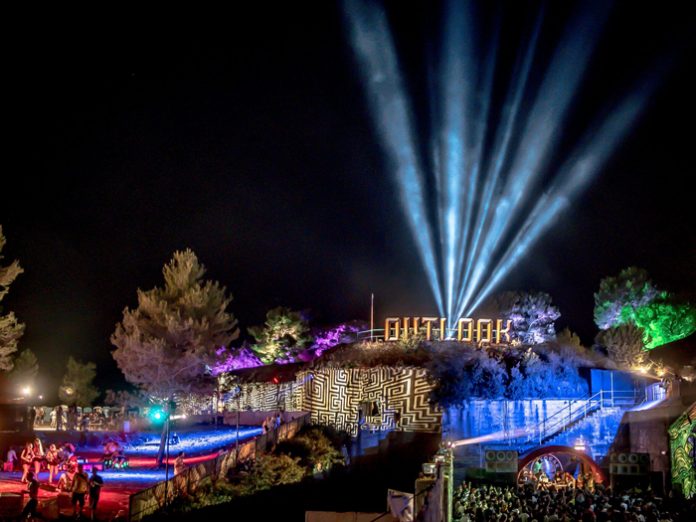 The sister festivals are held every year in Croatia’s medieval town of Pula in the ruins of the town’s 150-year-old Fort, ‘Punto Christo’. Providing the lighting and video aspects for both Outlook and Dimensions was UK lighting, rigging and production expert Fineline Lighting, which has been involved in the festivals since 2012.

“This year we looked after The Void, Mungo’s Arena, The Stables, Noah’s Ballroom, The Moat, The Garden and the main stage,” said Fineline Lighting’s Managing Director Rob Sangwell. “The two festivals celebrate EDM and soundsystem culture, so lighting and visuals are always high on the agenda.”

Sangwell and his team’s biggest task was Outlook and Dimensions’ flagship stage The Clearing, which boasted headline acts such as Stormzy, Andy C, David Rodigan, Noisia and Lary Heard AKA Mr Fingers. The stage itself was a 10m wide by 10m high triangle with a clear skin. Alongside the onstage video and lighting system were four towers of video and moving lights, with further video panels also installed on the PA masts.

“A fully integrated approach to lighting and video control was needed to link all the visual elements together, both on stage and out in the arena,” continued Sangwell. “We used two Arena consoles running in multi-user mode with individual work spaces so that the video and lighting elements could be operated together on one console or separately if required. This allowed visiting operators to take control of the entire show or just the visual elements they wanted, at the same time as providing a complete backup of the control system.”

The Avolites Arena is the ideal desk for festivals, theatres and anywhere that a larger control surface is required. It combines the popular interface of the Tiger Touch II with more live control than ever before. A second touch screen on the Arena provided an additional workspace window for Sangwell and his team. An optical output with built-in Titan Net Switch means the Arena is equipped for fibre connections, with no signal loss over a large area. This was essential for Sangwell when dealing with sizeable distances from the stage to Front of House at both festivals.

Networked up with the Arena consoles for seamless, integrated output were the Ai Infinity EX4 media servers. “The flawless integration between the control system and servers and the ease of use and speed of the output mapper made the Infinity EX4 exactly the right fit,” said Sangwell. “The reliability of the server and the superb backup provided by Avolites was also a big factor in this decision.”

“The consoles were selected based on the needs and complexity of each stage,” said Sangwell. “The Void stage had a punchy LED lighting rig capable of illuminating the substantial set pieces with vibrant colour and also delivering high-impact looks. Some of the artists bring their own video and floor packages which need to be integrated and due to the variety of music types and styles, versatility and flexibility is key here. The Tiger Touch II ticked all the boxes and its compact size was a bonus too.”

The Tiger Touch II console has been a longtime favourite amongst lighting designers and operators on the festival scene. The desk remains the perfect balance between power and portability with 60 pages of 10 playbacks, 10 static playbacks and compatibility with Titan Network Processors for DMX expansion up to 64 universes.

Sangwell was also responsible for the lighting at The Stables – a small venue featuring grassroots drum and bass acts such as Levelz, Lex Luger and Hucci. Due to the space available, Sangwell opted for Avolites’ most compact console, the Quartz.

The Quartz, at only 42.5cm wide, provided Fineline’s operators with 10 faders, 20 programmable executor buttons, 16 DMX universes and a 12.1″ touch screen, mitigating the need for any additional equipment. This meant Sangwell and his team could keep the control footprint to a minimum. Not only that, the Titan operating system is the same on all of Avolites’ consoles, allowing Fineline operators to move intuitively between the different desks on site.

“The speed with which programming can be achieved on Avolites products makes their consoles ideal for festivals such as Outlook and Dimensions,” said Sangwell. “The products have fantastic buskability and are reliable. Additionally, the support that Avolites provides its end users is fantastic; they are with you for the whole life-cycle of the kit.”

Dimensions and Outlook festivals are set within one week of each other. Dimensions Festival took place from August 25 – 28 and Outlook between the August 31 – September 4. This year, the parent festival Outlook celebrated its ninth year and Dimensions its fifth.