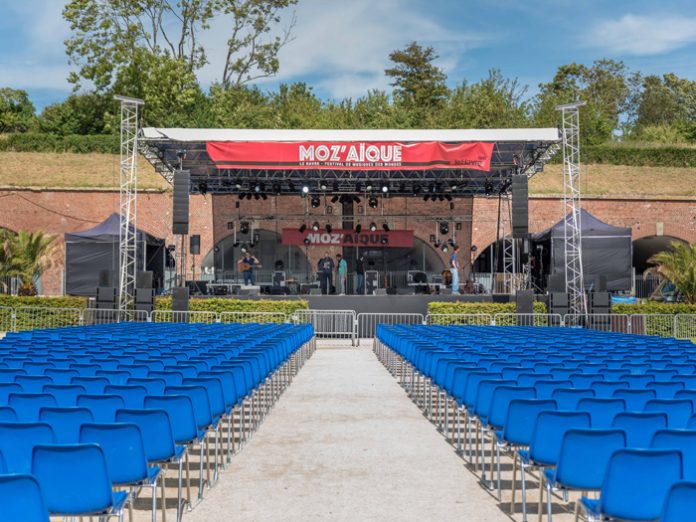 FRANCE: Created in 2010 by the city of Le Havre in France, the world music festival moZ’aïques is now firmly established as a major event on the regional music scene – taking over the stunning Les Jardins Suspendus site every summer in the middle of a former military fort overlooking the city.

40 concerts were planned for the eighth edition, with 100 musicians performing across two stages. The festival offers an eclectic programme over five days, encompassing jazz, soul, reggae, Latino and African music, with the organisers mixing headline acts with upcoming talent and local artists. To host the event, the city of Le Havre works with regional technical provider Visuel, which takes charge of the stage set up and audio requirements. The partnership with Visuel, going strong for six years, provides enjoyment to 30,000 spectators throughout the festival.

This year, Visuel decided to deploy APG’s loudspeakers at the festival over the brand they had previously used, with the ultimate goal of handling a complex acoustic challenge: two main stages facing each other only 200 metres apart, with musicians performing in front of an audience of up to 4,000 people.

“When you are lucky enough to host incredibly talented musicians and singers, it is absolutely critical to offer a sound quality that is capable of giving back the energy and the warmth drawn by the artists,” explained Jérôme Le Bay, Director of moZ’aïques’ Festival and a knowledgeable audiophile.

“Kudos to Visuel and APG for being able to offer a system that is flexible enough to do justice to every nuance of musical diversity, from the most intimate performance at one end of the scale to the most rousing from a 40 drum band.”

In order to cope with such a complex sonic challenge, Visuel opted for APG’s Uniline Compact (UC), a small line source system based on the Modular Line Array concept invented by APG.

“From an operational perspective, the Uniline Compact is also easy to handle and install, which saved a lot of time on stage during the installation,” added Le Bay. “I have to say that the Uniline Compact’s reach in front fill is greater than the system we previously used for this festival.”

The APG system configuration on both stages was identical: Ten Uniline Compact (8x UC206N + 2x UC206W) per side, two stacks of 3x UL118B and one stack of 4x UC115B subwoofers. 2x DX15 stage monitors in front fill and 4x DX8 ultra-compact speakers completed the sound system for the tip of stage.

The APG UC206N is a medium / long throw version of the Uniline Compact modular line array system which also includes the UC206W, a short / medium throw loudspeaker, and the dedicated UC115B subwoofer. Because of the unusual layout of the site and the related challenges it brings, the system was critical to the acoustic results for the festival.

Sound coverage is made lengthwise at moZ’aïques, while huge greenhouses can be found on one side of the stage and the public. Thanks to the UC206N narrow horizontal coverage (only 70°), the audio power was perfectly directed towards the public, thus minimising impact on the greenhouses glass.

“The festival was looking for a stellar sound, capable of delivering both excellent acoustic performance and exceptional audio quality,” said Régis Lethuilier, Technical Director at Visuel. “The Uniline Compact perfectly met these expectations; we decided to use the APG system this year as we are always keen to offer the latest and best equipment available, and the APG loudspeakers are made in France so it was a no brainer!”

Visuel teamed up with the acoustic engineering consultant Guillaume Lecreux from Iso-Sonique to specify the sonic requirements and to operate it on site. Lecreux was particularly impressed by the level of flexibility offered by the Uniline Compact: “This APG system is able to reproduce any musical style for a festival of this size. The acoustic pressure levels that it is able to generate are quite simply mind-blowing compared to its size!”