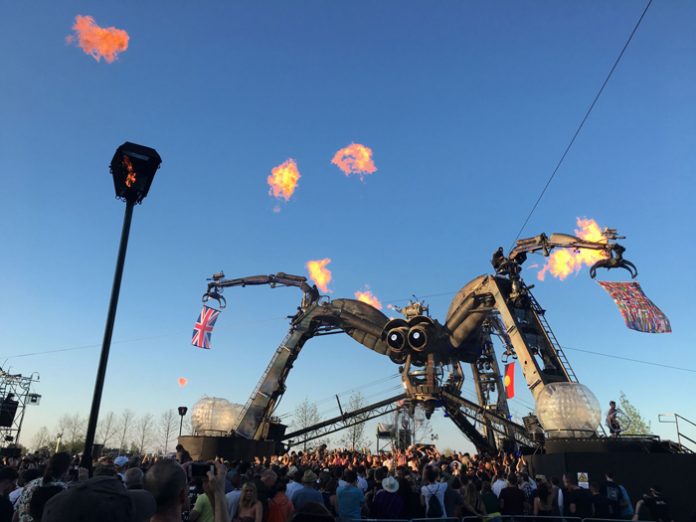 UK: The festival food waste scheme, Eighth Plate, returned after a two-year hiatus on the first May bank holiday weekend at the Arcadia London Spectacular.

From May 4 – 6, staff from the Nationwide Caterers Association (NCASS) visited the food traders onsite at Queen Elizabeth Olympic Park to discuss surplus food at the end of the festival and how it could be safely redirected.

Owing to the work of the traders onsite and the organisers of Arcadia London, the process was managed and completed successfully. Eighth Plate’s relaunch at Arcadia London will be used to develop a case study to advise future project managers on how the scheme can be implemented at other events in order to salvage and donate as much surplus food to as many charities as possible.

Every day, one in eight people in the world go hungry. Eighth Plate works to feed that eighth person, and in 2018, the organisation aims to work with UK events to prevent surplus food from going to waste, instead diverting it to those in need and reducing the carbon footprint of the event.

Eighth Plate was originally launched in 2015 as a project designed and managed by A Greener Festival, FareShare South West and the Nationwide Caterers Association, after a panel discussion about food waste at the annual Green Events & Innovations Conference. At just seven festivals, 23 tonnes of surplus to requirements food was re-directed from traders and campsite collections to local FareShare sites – equivalent to 55,000 meals.

The project was funded by WRAP and the Esme Fairbairn Foundation, with the aim of collecting surplus food from events, flash-freezing it and making ready meals which could be distributed to those in need. Despite being considered a success, without further funding the operation was deemed unfeasible.

The project has been relaunched after requests from NCASS traders who had been involved with the scheme in 2015. The renewed initiative boasts improved coordination and processes between traders and event / trader managers.

Eighth Plate worked closely with the sustainability manager and trader manager at Arcadia London from the beginning and were aware that the traders onsite were experienced and well versed in food safety. This meant they were likely to be able to deliver the project, but that there would be less food waste than might usually accumulate at events with less experienced traders.

Communication from the organisers to traders about expected attendance helped them to stock effectively, meaning the available surplus was kept to a minimum.

As food business owners and their staff were already trained in safe food handling and had brought the facilities to store and transport food produce with them, the collection process was arranged and implemented skilfully and efficiently.

Only four of the 10 hot food traders had any surplus that Eighth Plate could use – predominantly bread rolls, wraps, crumpets, salad vegetables and milk. In total, Eighth Plate salvaged over 50 kilos of baked goods and around 20 kilos of salad and vegetables. Catering Equipment donated cool boxes, ETI donated temperature guns and Telemetry donated temperature sensors to help manage the safety of the produce, without which, the food would not be accepted as safe to eat by FareShare.

“Our members’ livelihoods depend on being able to effectively manage stock, but this scheme enables even the surplus they have to be re-purposed and will hopefully help to raise awareness of the spectre of food waste and its environmental impact to the wider public,” said Mark Laurie, Director of NCASS. “Together we proved that with the right support, events and traders could coordinate effectively and manage any surplus in future, reducing the carbon footprints of events and feeding those in need.”