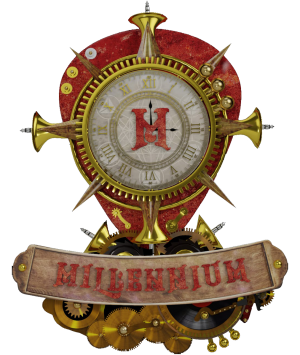 The Ethernyum Project will hold a FESTIVAL MILLENNIUM, one of the biggest music events ever produced in Brazil, with an innovative, thematic, and scenographic concept inspired by the old and new millennium.

As has been publicly announced, Norberto Ribeiro da Silva, President of the Ethernyum Project, clarifies that:

“We have been developing the Ethernyum Project for almost 10 years. We started the development of the project in January 2011 and now the dream will come true, just when we will come out of the pandemic, with artists and audience in a spectacular reunion of music and love“.

Norberto believes that this will promote the music and arts industry, strengthening the means to encourage the return of the music market with full force!

The Millennium Festival will be held in its own Arena called Genesis, located on a fabulous 3,664,200 m2 farm, acquired exclusively for the mega event, and across 8 consecutive days, it is expected that more than 1,500,000 people will visit the festival.  There will be 5 stages, positioned North, South, East, and West in a 360-degree format. Each stage will have a different theme from the other, all unified in a metatronic, futuristic, practical, safe, and visually fascinating deployment.

Located 45 minutes in the interior of São Paulo, the farm has safe and easy access to the main roads and highways of São Paulo. The Millennium Festival is a hybrid event and will be the most radical Rock, Pop, Jazz, Gospel, and Electronic event in the world!

The Millennium Festival will innovate even in the acquisition of tickets, by exchanging them for a utility token specially developed for large music events, Mcoin, which will be the official acceptance token of the event, generating convenience and security for consumers, a revolution in this type of event. Norberto Ribeiro explains: “The Millennium Festival is the first festival to exchange utility tokens for large festivals, before any other.“

Millennium Festival will unite the real and virtual world where people will feel and experience something never done before in any kind of music event! Only those who will be there will know about it and will experience this!

Norberto Ribeiro explains the inspiration for creating and holding the Millennium Festival:

“The project was inspired by the creation and birth of the Universe, the stars, the planets, and the creation of life” and adds “the organization of the event is very well supported with important global players to guarantee the delivery of the enterprise and protect the interest of the public that will visit the event“.

The Millennium Festival has national and international partners, producers, insurance companies, and reinsurer companies that are developing specific products for the Festival, aiming to provide total security to the public.

Two new sub-products are being created for Millennium Festival: a film that will tell the story of the festival’s creators, and all the efforts and dramas to create, develop and carry out the mega festival as they managed to bring together the team of production specialists, suppliers and service providers, as well as a Book with the festival’s iconic stories and images, containing extraordinary information on everything that happened before, during and after the festival.

The Millennium Festival also innovates with the creation of NFTs (Non-Fungible Tokens) in the artistic, cultural and musical segment that will allow interested parties to acquire rights to the book, film, and several other items that will be announced soon. All this will be available in the Mcoin user platform where the Millennium community and others will be able to acquire exclusive items!!

In another important innovation, through investments from the startup fund, the Millennium Festival will also be aligned with the best sustainability practices and will have the support of significant international companies in the generation of a 300% positive climate standard, with a significant reduction in emissions of greenhouse gases and also triple offset through climate action credits.

Further development of the Millennium Festival brand is expected to take place over the next 7 years with the festival concept being offered to festival and event producers around the world as a franchise partnership, more information coming soon.

For each country, there will be some stage and scene changes, but most of the artists will be the same so that fans can travel across Europe and beyond watching their favourite bands and artists during the Millennium festival tour!

Finally, Norberto Ribeiro concludes: “The Millennium Festival intends to honour all the victims who lost their lives to the COVID-19 virus. in prayers for all the lives lost around the world.”