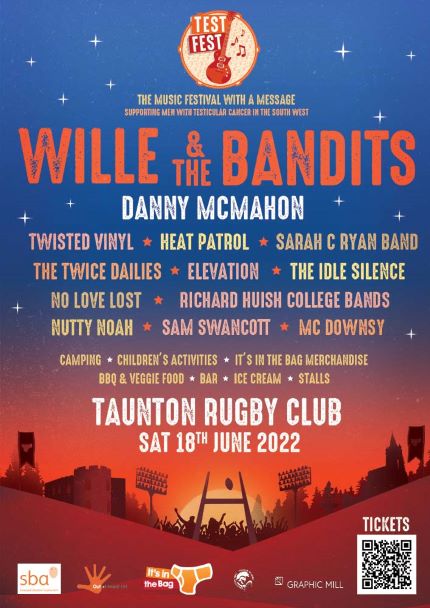 After a two-year gap due to the pandemic, the popular music festival Test Fest is back! Event organisers It’s in the Bag are getting ready for this brilliant festival which is all about raising awareness not fundraising. They have moved to a new venue at Taunton Rugby Club and welcome Cornish headliners Wille and The Bandits.  Taking place on Saturday 18th June 2022 at 12 noon to midnight this is a unique music festival to the UK.

Test Fest is a music festival with a message – the only one of its kind in the UK and maybe the world! Their aims are to support men at diagnosis and during treatment, raise awareness to encourage early detection and celebrate the 98% survival rate from Penzance to Worcester.

During the pandemic the charity has had an opportunity to look at the event and make some changes. It’s in the Bag, like many other charities and organisations, has had a difficult time during the pandemic in terms of fundraising and its face to face work. Sports Clubs too have had a tough time, so the organisers are really pleased to be working with Taunton Rugby Club. They lost income from cancelled matches and so are looking at diversifying their venue use – the Test Fest is the first event to go ahead at the club out of the rugby season.

We met James Tolman and Nick Mason from the club and they are very supportive of what we are trying to achieve. The game of rugby is primarily a men’s sport and what better way to raise awareness of Testicular Cancer and also support the club. They have also allowed us to attend matches to tell the spectators what we are all about. We are looking forward to showcasing to the club what we can do”.

Most of the bands are performing for free or a very reduced fee, including very popular South West band Wille and the Bandits, being supported by Bristol born UK Country Artist of the Year 2020 Danny McMahon. Twisted Vinyl are regulars to the festival, as are Heat Patrol and The Twice Dailies (Wurzel Tribute Band), The Sarah C Ryan Band, Sam Swancott, Elevation, The Idle Silence and No Love Lost.

Testicular Cancer is the most common cancer in young men and to get young people involved in the festival, the organisers have a couple of local bands playing from Huish College.

A new addition is the Children’s Activities tent, with a session by the charity patron Nutty Noah. Nutty Noah has won acclaim for his appearances on BBC Crackerjack and 8 of 10 Cats. Bristol Bears compare and DJ/producer Downsy will be the MC for the Day.

Raising awareness is key. We encourage self-checking to ensure early diagnosis. We do this is a fun and accessible way by our quirky and eye-catching campaigns, like Keep Calm and Check Your Balls and Keep an Eye on your Tackle. The festival is our biggest awareness event of the year. We met Wille in Bideford a few weeks back and the band are so excited to be playing at the festival.