Home News The O2: Arena Gets Greener With Announcement of New Measures 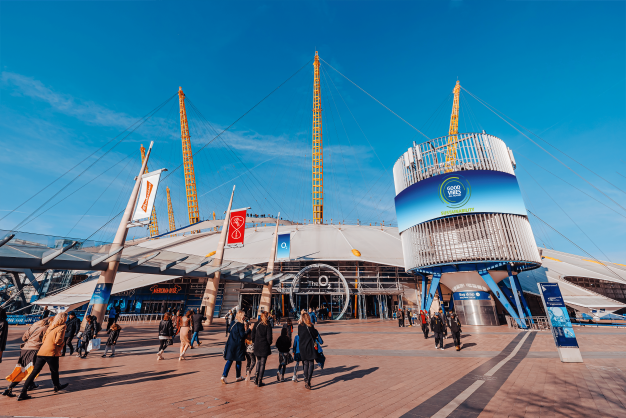 Not a festival, but definitely an entertainment venue striving to lower its environmental impact, The O2, which is owned and operated by AEG Europe, has today announced a series of new measures to make the world’s most popular music, leisure, and entertainment venue even more sustainable for fans, bands and brands.

Coinciding with the venue’s 15th birthday and Billie Eilish bringing her ‘Happier Than Ever’ tour to the venue this month, alongside a cross-campus climate festival Overheated, The O2 will be implementing various changes within the arena to reduce single use plastic, promote a plant-based menu, and better enable customers to make informed and responsible choices.

Within The O2 arena, together with the venue’s catering partner Levy UK + Ireland, the venue has committed to going 100% vegan on all available food items for the six Billie Eilish shows, with The O2 being the only venue on Eilish’s UK tour to make this commitment. Working with the artist and tour team on their Green Rider, The O2 has gone above and beyond in delivering every requirement and surpassing in certain areas, including a fully vegan food offering available for fans on both the concourses and on suite level, and the removal of non-vegan food items from the menus. Following Eilish’s run, The O2 will continue with a plant-forward philosophy, which will see the concession stand staple ‘beef burger’ being removed from the menu permanently.

Through its partnership with Levy, The O2 arena is also working with Klimato to calculate, communicate and report the climate impact of the food available for fans to purchase, to enable them to make conscious and sustainable choices – a first for a venue of this scale.

This commitment to go fully plant based for Eilish’s shows at The O2 arena has also been supported by The O2’s venue partners, with drinks sold in the arena by Budweiser Brewing Group and Champagne Lanson already offering vegan products, and Nestlé providing vegan sweets and alternative vegan milks at the NESCAFÉ Azera Coffee Shop.

Looking ahead, Levy have committed to reaching net zero at The O2 arena by 2025 – a venue first for the industry-leading catering partner. This commitment will see Levy continue to support The O2 arena in using technology to track its environmental performance and reduce waste through Levy’s ‘reduce, re-use and review’ policy. Achieving net zero for food and beverage at The O2 by 2025 will be an integral part of the venues overall strategy to hit net zero. The O2 and AEG Europe are currently working with A Greener Festival on establishing an accurate scientific baseline for scope 1, 2 and 3 emissions before publishing its full plan for net zero later this year.

Throughout The O2 arena, the venue will be installing several water dispensers for fans to easily access on their visit, thereby reducing the need for plastic water bottles. Visitors to the arena will be encouraged to bring soft, reusable water bottles which will need to be emptied prior to entry and fully collapsible.

The O2 is also taking strides to reduce the amount of single-use plastic used in the arena moving forwards and has committed to using recyclable paper cups in all areas of the arena, including backstage. The venue has also removed all plastic bags from merchandise units and is implementing fabric wristbands made from 100% recycled PET plastic for standing arena attendees for the first time this month.

The O2 is the ultimate example of urban transformation following its rebirth from an unused Millennium Dome, to what has now become the world’s most popular music, leisure, and entertainment venue. With over 9 million visitors each year, and sustainability as a major focus and main pillar of the venue’s Good Vibes All Round initiative – a platform for sharing The O2’s actions to fans, bands and brands – the venue is continuously looking for ways to limit its impact on the environment.

Innovation has been key to The O2’s sustainability initiatives in recent years, through both the implementation of digital ticketing through AXS Mobile ID, which eliminates over one million paper tickets being print each year, and The O2 being the first venue worldwide to trial and generate power from ground-breaking vertical-axis wind turbines, developed by British start-up, Alpha 311.

John Langford, COO at AEG Europe said: “Finding ways to make both our venues across Europe and worldwide, as well as the wider live entertainment industry, more sustainable has never been more important, and we’re proud to be leading the charge as a company to help find and trial innovative solutions and help reduce our impact on the planet.”

Steve Sayer, VP & General Manager at The O2 said: “We’re so proud to be taking real strides this month to becoming an even more sustainable venue here at The O2. Going fully vegan in the arena for six sold out show dates with Billie Eilish is no small task and is something that we know will really resonate with fans attending the shows. The reduction in single use plastic in The O2 arena is another huge step forward for us, as we work towards our A Greener Arena accreditation, and ultimately one day towards becoming net zero as a venue. As one of the world’s leading venues, it’s important that we help drive industry change in the space of sustainability and show that we can all make a difference, whilst continuing to still provide a best-in-class experience for the fans and artists.”

In conjunction with AEG Sustainability’s broader environmental programs, The O2 also has a state-of-the-art waste compound, green cleaning program, ongoing energy reduction projects and on-site wormery and aerobic biodigestor eco-digester that have contributed to less than 1% of waste going to landfill per year. The venue has surpassed its waste, water and greenhouse gas emissions targets every year since 2010. The O2 has been procuring green electricity for the entire site since 2018 and this has had a significant impact on reducing GHG emissions by around 6,000 metric tons each year.

The O2 is also easily accessible by tube, bus, boat or cable car, with fans encouraged to travel to the venue by public transport where possible.