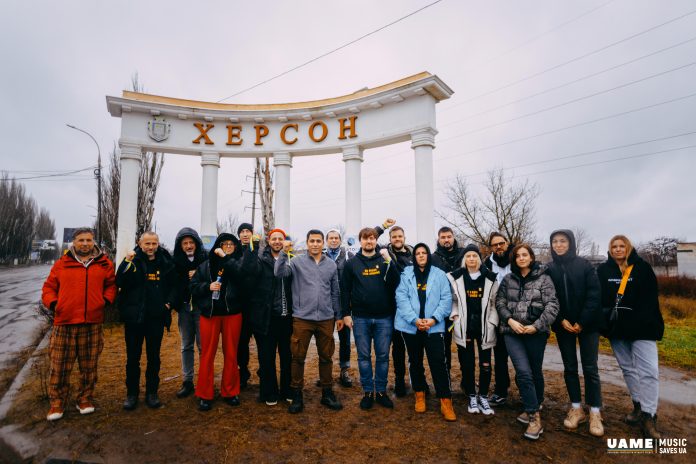 Organizers of festivals, cultural events and night mayors from Slovakia, Canada, Georgia, Latvia and North Macedonia recently spent 5 days visiting 7 Ukranian cities Ukraine. During 5 days they visited 7 cities and took part in two educational events in Kyiv and Lviv. The project was organized by the Ukrainian Association of Music Events (UAME) in partnership with Night Ambassadors.

Among the guests: Michal Kascak, (founder of the largest music festival in Slovakia – Pohoda Festival), Login Kochishki (founder of the largest music festival in North Macedonia – “TAKSIRAT”), David Lezhava (music producer and expert on the development of nightlife in Tbilisi, head of act4culture), Zvyad Gelbakhiani (one of the founders of BASSIANI club and ISKRA festival), Mathieu Grondin (head of MTL 24/24, a Canadian organization that develops nightlife and economy 24/7 in Montreal), and Ilze Jankovska (publicist, democracy promoter at Fund for Democracy, volunteer at Easy to Help).

During the first two days the guests got acquainted with Kyiv and the Kyiv region. They saw with their own eyes what the Russian troops did to residential buildings, theaters, the “Mriya” plane, as well as to the monument of Taras Shevchenko in Borodianka, who was shot in the head by an enemy soldier.

“After today, I understand that this is not Putin’s war anymore. It was not Putin who ordered to shoot the Ukrainian poet in the head, to “decorate” the house of culture and the stadium in Irpin with bullets, to bomb civilian houses in Bucha, Irpin and Borodyanka. The poet’s head was shot deliberately and with precision by a Russian soldier“, – Ilze Jankovska shares her impressions on her Facebook page (link to the post).

After the Kyiv region, the guests went to the Atlas club to hold the first discussion of the UA Night Summit, where together with Ukrainian colleagues from HVLV (Yuriy Pogrebnyak), STEZHKA (Dmytro Novak) and SLUKH (Danya Panimash) they discussed the creative and entertainment industry in times of crisis (war, unemployment and COVID), as well as the festival and club industry in Ukraine. Immediately afterwards, the guests, accompanied by the UAME \ Music Saves UA and Night Ambassadors teams, went to Kherson.

“We have been planning this project for almost two months, and when Kherson was de-occupied, we knew we had to go there. Our team cooperates with the Support Kherson Foundation and we have already managed to send humanitarian aid and generators to Kherson to help people who stayed in the city. We warned all guests that it was dangerous and some even refused to go because their families were against it. However, most agreed. As soon as we got off the train, we immediately heard the sounds of explosions, which did not stop the whole time we were there. We visited several humanitarian headquarters where the aid from Music Saves UA is delivered, saw a queue of hundreds of people, although it was raining and there were explosions outside. When we got to the central square to see it and the city administration, we were able to stay there only for a few minutes, the shelling was getting even closer and the military administration ordered us to leave the city immediately. A few days later, that same building was bombed“, – comments Oleksandr Sanchenko, President of the Ukrainian Association of Music Events and co-founder of the Music Saves UA initiative.

After Kherson, the guests visited the humanitarian headquarters of Music Saves UA in Mykolaiv, saw the destruction caused by the Russians to the building of the regional state administration of the city, talked to representatives of the state administration and went to Lviv, where they met with the mayor of the city Andriy Sadovyi and the head of the Unbroken center.

During the UA Night Summit in Lviv, the guests were asked how their perception of the war in Ukraine has changed and what they plan to do after returning home.

“For several days we were constantly talking about how we can support Ukraine now. First of all, it is to talk and talk, so this topic is still in the news and on the front pages, and we also have to do networking with various festivals. I know some people in Montreal, and I could involve them in fundraising initiatives, and it would be interesting to do a cultural exchange with artists from Canada. This is what impressed me – cultural life here is blooming, events are happening despite the difficult situation. It’s a great idea for Canadian artists to come to Ukraine and vice versa,” commented Mathieu Grondin.

All organizers agreed that the most important thing now is not to be silent, to support crowdfunding projects, and to work in collaboration with Ukrainian artists.

Music Ambassadors Tour is a social and cultural project that has several goals: first, to attract music professionals from other countries to become cultural ambassadors of Ukraine at home. Secondly, to motivate to raise funds, provide humanitarian aid and ensure the stable operation of volunteer initiatives. Thirdly, to discuss ways to develop cultural life in Ukraine, taking into account the realities of war.

A short documentary video about the project is planned to be released in January 2023. You can follow the announcements and additional information on the UAME pages: