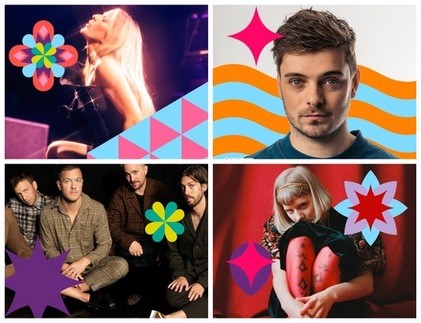 After the successful premiere of SUPERBLOOM 2022, next year’s festival will take place on 2th and 3th September 2023. The American indie rock band Imagine Dragons, EDM superstar Martin Garrix and British pop singer Ellie Goulding will be there in September, when the grounds of Munich’s Olympiapark will once again be transformed into a spectacular world of experiences. Already 2022, the SUPERBLOOM Festival could celebrate its first sold-out edition with 50,000 visitors per day. A unique and diverse program with national and international superstars, comedians, podcasters and numerous experience areas paired with a dreamlike setting.

The first confirmed acts also include award-winning German art-pop band Giant Rooks and singer Olly Alexander – better known as Years & Years – who is catching up for his concert from 2022. French DJ duo Ofenbach, who are currently delivering hit after hit, as well as Belgian chartbreaker Lost Frequencies and Brazilian house DJ Öwnboss complement the electronic music part of the festival. Two of the country’s most celebrated rappers also grace the SUPERBLOOM line-up for 2023: Rap veteran Marteria and Badmómzjay, who has just been voted as the best newcomer of the year in Germany. Concentrated female power also comes to Munich with the British Cat Burns, as well as the Scandinavian singers Zara Larsson and Aurora. Paula Hartmann, who knows how to tell a story in her songs with her straight and contemporary lyrics, the iconic rapper Ski Aggu, who doesn’t hould back in his lyrics, and singer-songwriter Ennio lead the squad of national artists. Many more artists, comedians and podcasters will still be part of the line-up for 2023.

Superbloom’s numerous experience areas offer an experience for all senses and all ages; with plenty on offer for families and little guests – they can experience adventures in the magical world of the MiniBloom. For “the heart” of the Kids Area, the Daisy Stage, the rapping rhinoceros Dikka, the first dino heavy metal band Heavysaurus and UNTER MEINEM BETT präsentiert GORILLA CLUB & GÄSTE have already been confirmed. More experience areas will be announced in the upcoming months.