Home News K-array performs in the heart of the Amazon Rainforest for Rock in... 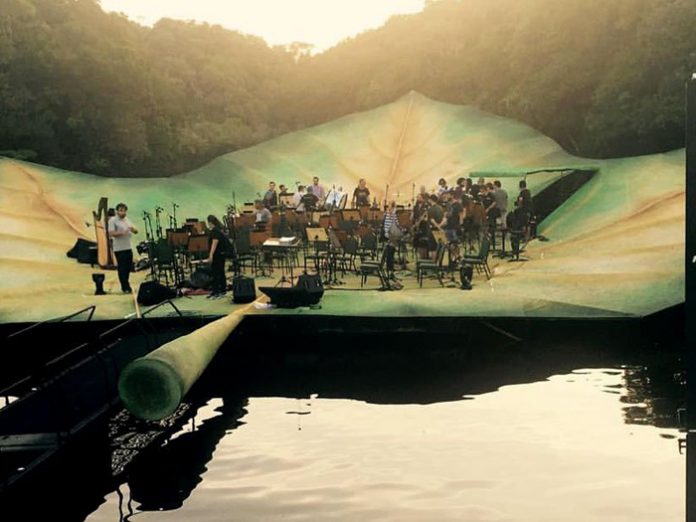 BRAZIL: K-array was chosen as the sound reinforcement for the Amazonia Live opening show, held on August 27 in the heart of the Amazon rainforest in Manaus, Brazil. To provide complete coverage for the 250-person audience, professional audio production and rental company, Gabisom, used two KR202 portable systems to achieve the perfect balance of power and inconspicuousness.

The Amazonia Live is a social and environmental outreach stemming from the organisers of the Rock In Rio, with the aim to raise awareness of the importance of the Amazon rainforest and to raise funds to recover vegetation. “We want this event to shake the world awake, because the Amazon is the heart of the planet and responsible for a fundamental ecologic balance,” said Roberto Medina, creator of the project.

For the opening event the organisers created a floating stage in the form of a leaf in the middle of Negro River, where performances by the Amazonas Philharmonic Orchestra, the Amazonas Choir, a rock band featuring Sepultura guitarist Andreas Kisser, and vocalists Ivete Sangalo and tenor Placido Domingos took place.

“Since the show was made for television, the goal was to create a system that sounds great yet had no visual impact,” said Peter Racy, Gabisom’s chief sound engineer. Yet the floating stage created several challenges for the rental company: “Reducing the visual impact was difficult because it meant we had to extend all the fibre optic cabling, including AC, underwater for the audio and DMX for the lights.”

According to Racy, the K-array systems were the obvious choice since they offer a huge sound quality and pressure in a small profile: “The fact that the KR202 is a very light product was also a huge benefit,” he said. “Since the main stage was set in the middle of the river, we were forced to transport all equipment by air and water.”

Gobos do Brasil represents and distributes the Italian brand in Brazil and was crucial in making the event come to life.