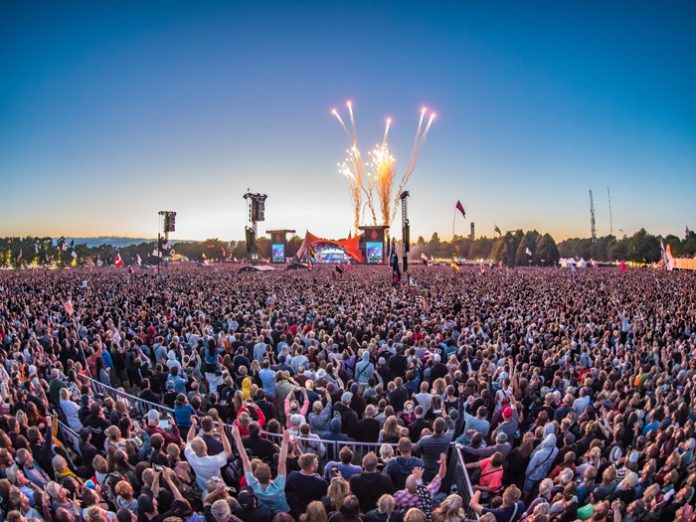 DENMARK: Roskilde Festival 2018 marked the first year of a multi-faceted partnership with Meyer Sound, attempting to create a new paradigm in large scale festival sound as well as launching pillar programs in education and training, scientific research and development – all with the goal of elevating the festival experience for the audience, technicians and artists alike.

Wrapping up in early July, the 2018 edition of Denmark’s long-running Roskilde Festival attracted a total audience of more than 130,000 for eight days of musical performances from 184 artists including Orange and Arena stage headliners Bruno Mars, Eminem, Gorillaz, Nick Cave and the Bad Seeds, Massive Attack, Nine Inch Nails, David Byrne and Khalid. All stages – from the small and intimate to the massive Orange stage – were powered by Meyer Sound systems.

Roskilde Festival and Meyer Sound led extensive training sessions over the months prior to the festival as part of a technical education initiative. The education program is one of the many initiatives of the partnership that appealed to Meyer Sound in collaborating with the festival that has stayed true to its non-profit roots. Any profits from the festival are distributed to charity every year.

Meyer Sound co-founders John and Helen Meyer were in Denmark to experience the results. “Working with the whole team at Roskilde has been amazing right from the start,” said Executive Vice President Helen Meyer. “It feels different than the other big festivals. Everybody is very cooperative, and always coming up with new ideas. Also, there’s a warmth to it. Everybody really cares about what they’re doing, and that makes it a very special experience.”

Supervising the technical education side of the collaboration is Morten Büchert, who works with the festival year round as consultant and project manager. Under the five-year agreement forged late last year, all sound reinforcement systems at all Roskilde stages are Meyer Sound. The systems are supplied by the Bright Group, a leading European AVL rental and integration firm. The technical teams of Bright, Meyer Sound and the festival were fully integrated, collaborating on the sound design and deployment.

“This partnership with Meyer Sound is an opportunity to move into uncharted territory,” said Büchert. “I’m positive we will succeed with this, based on the quality of the staff and the quality of the products. The mindset that everybody brings to the table is one of openness and curiosity, and that will have a positive effect on the audience experience.”

“The sound systems for all the stages have been redesigned since last year,” added Lars Liliengren, production manager for the festival. “We looked at the entire site and calculated the coverages we needed to achieve our goal, which is to close the gap between the audience and the artists on the stage.”

Close to 1,000 Meyer Sound loudspeakers were deployed across the eight festival stages as well as all other festival-related events and activities requiring sound. The largest system by far was at the Orange stage, anchored by LEO and LYON main line arrays with added power from LEOPARD line arrays and deep bass from 1100-LFC and 900-LFC low frequency control elements.

Systems for the Arena, Avalon and Apollo stages were built around LYON main arrays, with LEOPARD arrays doing the heavy lifting at the Pavilion, Rising and Countdown stages. The low end of the new VLFCs brought a visceral feel to the EDM experience at Apollo. LINA arrays, the newest and smallest of the LEO Family, were deployed at the Gloria Stage.

Meyer Sound Production Manager Dennis Tholema led the technical team embedded at the festival. Bob McCarthy, Meyer Sound’s director of system optimization, led the team charged with the design and tuning of the festival systems, working together with Bright logistical and rigging teams and the festival’s own technical staff.

For the Bright Group, Roskilde afforded a unique, collaborative opportunity to demonstrate how their Meyer Sound inventory and support teams could manage a massive, multi-stage festival. “I’m looking forward to many more years of this,” commented Bright Group CEO and President Patrick Svensk. “We have been partners with Meyer Sound for many years and we expect to strengthen that partnership through the festivals yet to come. Audio is key for a music centred festival like this.”

Another notable feature of the festival was the ‘Big Mix Lounge’, organised by Meyer Sound, where Metallica FOH engineer ‘Big Mick’ Hughes hosted a relaxed island of hospitality for his visiting peers. “You couldn’t come up with a better plot,” said Hughes. “You’ve got the Roskilde family forming a bond with the Meyer family, and only good things come out of that. It ensures the quality of the audio across the entire site, so that every stage is catered to fully – and expertly so. I hope this model is recognised by other festivals as a good way to go.”

Summing up the thrust of the novel partnership, Roskilde Festival Group CEO Signe Lopdrup said that the purpose of the collaboration is to “enhance the experience for all participants here at Roskilde. I think this partnership goes beyond great sound. It is about creating community, and creating experiences at a new and higher level.”

Meyer Sound leveraged its unique relationship with the festival to conduct R&D experiments over the course of the week. Working under the direction of Morten Büchert and Meyer Sound Senior Scientist Dr. Roger Schwenke, students from the Danish Technical University helped set up experiments to measure variations in sound propagation at different heights above ground level as caused by increases in temperature and moisture from the crowds.

Staged continuously since 1971, the Roskilde Festival is the oldest and largest music and cultural event of its kind in Northern Europe. The festival’s full-time staff of 50 is augmented by nearly 32,000 volunteers at the time of the event. A non-profit venture since its inception, the festival operates under the auspices of the Roskilde Festival Charity Society.