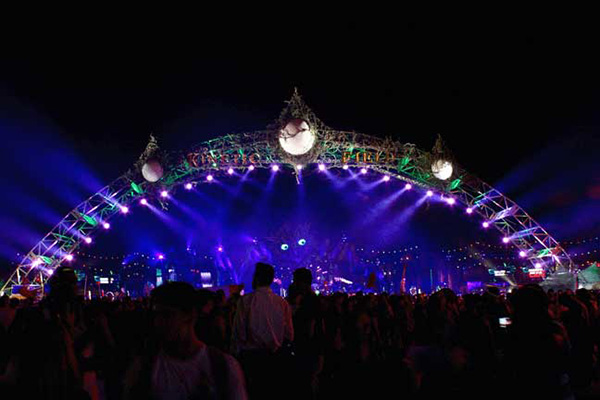 USA: The largest festival in North America, EDC brings 140,000+ attendees for each of its three nights at the Las Vegas Motor Speedway. The electronic dance music has no shortage of exciting visuals, but none more spectacular than the 75 High End Systems Shapeshifter automated luminaires that framed the main stage entryway arches. Lighting designer Andrew Gumper and production company AG Production Services were in charge of creating and illuminating the structure.

Andrew commented: “The production runs from 7 pm to 6 am, so darkness is key and lighting is everything. We were in charge of a few different areas, including the main stage entryway arches. We installed a full lighting and structure package for the three arches, which were 210 foot wide and 65 feet tall. The 75 Shapeshifters provided that ‘wow’ moment when people walked into the main stage area. We placed 25 Shapeshifters on each arch, which gave us that twinkle and sparkle and big eye candy looks when people were walking in, and also served to separate the concert stage from the common area.

“The show was programmed by High End’s Joe Haller on a Hog 4 console, and electricians Mike Gallagher and Chris Archfield were also critical to the success of the production. Andrew’s primary programming instructions were to create big looks visible to attendees, but also from above. “We were going for big looks visible from helicopters; the arches are about 700 feet apart, so the only way to appreciate the entire thing at once is from the air. We created big concentric chasing looks that went around all three arches, as well as specific areas we hit with special effects.”

Gumper said the Shapeshifter was totally unique for this application. “It’s not just another wash or profile, it’s cool and it’s recognisable, so it created a different look. Nobody’s seen them used like this – they were very unique to this application.”

For more information on HES, check out its official website.