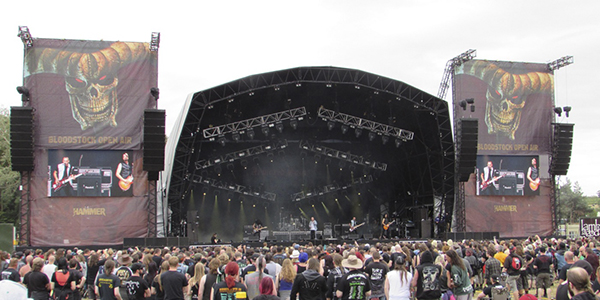 UK: Bloodstock Open Air is one big family reunion in many respects, and Showsec help to ‘paint the picture’ of such a vibrant community spirit.

The roaring success of this year’s event in the picturesque Derbyshire setting of Catton Park portrayed once again why Bloodstock continues to enhance its reputation for being the United Kingdom’s largest dedicated heavy metal festival.

Founded and organised by the Gregory family, it features a metal family of 15,000 fans who flock to Catton Park each year and a Showsec family of staff who have become familiar faces at the festival due to their enjoyment of the working experience.

As well as the heavy metal line-up, which in this instance was headlined by Within Temptation, Trivium, and Rob Zombie, one of the other big attractions was an art exhibition featuring the work of the festival’s co-founder Paul Raymond Gregory.

This included Gregory’s work-in-progress ‘Mordor Festival’ which made another appearance in the RAM Gallery by the Main Stage, along with many other fantasy art work pieces that include a unique design of the festival logo every year.

The ‘Mordor Festival’ is inspired by Tolkien and has a unique frame, which now features the Showsec logo along with many other partners of BOA.

“Our support of the art exhibition is a good example of how we have worked closely with the Gregory family to help develop the very unique and special festival community at Bloodstock Open Air,” explained Operations Executive Darren Evans, himself a heavy metal fan who attended the festival before he began working for Showsec.

“We have a great relationship with all who work at Bloodstock, everyone knows everyone and this all adds to the success of the event.

“It is like a big family gathering with a real sense of togetherness and community spirit which ensures the festival is enjoyed by everyone.”

He added: “A large number of our staff look forward to working at Bloodstock all year round. So much so, that staff from as far afield as Wales are willing to travel to Catton Park to work each year.”

In praising the contribution of Showsec, Bloodstock Director Adam Gregory cited an example of interaction with fans which highlighted the important role that is played in stimulating such a good-natured, friendly atmosphere.

“Showsec provide a pivotal team to help with Bloodstock each year, the staff are friendly and welcoming to all while at the same time ensuring the fan and staff safety is their top priority throughout the festival,” he commented.

“Bloodstock fans have embraced the Showsec team and consider them very much a part of the family.

“Walking through the crowds on Saturday, I personally heard one of the fans asking a Showsec staff member for his name and said: ‘great to meet you’, which I thought was a really nice gesture. It goes to show exactly how the working relationship between Bloodstock and Showsec has grown.

“Showsec’s staff understand how to be in control without coming over aggressive, a rare commodity these days and we look forward to a continued partnership.”

This was the 15th year that Bloodstock has been staged and for the last six of those years, Showsec have been influential in developing its special atmosphere.

Although some of the sights were pretty scary, including Predator, zombies, Judge Dredd, and a clown sporting a gas mask, you cannot fail to see that the environment is a huge metal family primarily there to ‘rock out’ and have fun.

One metal fan wrote on the festival’s Facebook page: “I love the Showsec personnel. They’re all really nice people, a lot of whom seemed to love the music as well. Maybe that’s why the same personnel seem to sign up for working it every year.”

While the good nature of its followers and the community spirit generate a special atmosphere, there is nevertheless an important role for Showsec to fulfil to ensure that it is an enjoyable experience for all in attendance.

An important element of that operation is having an experienced pit team to manage the enthusiasm and energy within the crowd.