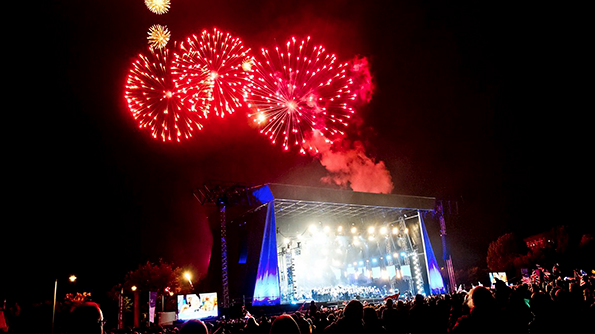 UK: Pro-audio provider The Warehouse Sound Services helped the BBC Proms in the Park at Glasgow achieve a sensational sound experience after designing, installing and engineering the sound for the diverse range of acts involved.

The Scottish Symphony Orchestra, under Stephen Bell, performed a versatile show, with music ranging from Bernstein’s overture Candide and Sibelius’ Karelia Suite to a specially adapted Poldark Suite by composer Anne Dudley from her music for the popular television series, and a host of imaginatively crafted accompaniments to main acts that also included the locally recruited amateur enthusiasts of Glasgow’s Big Big Sing.

The different Last Night events from around the UK joined together to sing a track from the Sound of Music.

The Warehouse Sound Services provided top of the range sound equipment alongside a talented audio crew to BBC Proms in the Park. The company has worked with the BBC Proms over the last eight years.

An advanced sound-set up is required due to the diversity and complexity of the music involved, the outdoor setting and the fact the event is broadcast live across BBC networks.

For the first time, The Warehouse developed a d&b audiotechnik sound system utilising Array Processing. The system comprised of J8 / J12s and JSUBS with T10 front fills. Adam Hockley of d&b audiotechnik Application Support and Education was on board to implement d&b’s new Array Processing technology for the D80 amplifier. This huge space of Glasgow Green is an acoustical challenge for any system and engineer and d&b’s Array Processing provided the perfect solution.

Pete Harris, Hire Manager at The Warehouse and the man behind the FOH sound mixing said: “I have mixed the BBC SSO at the same location for many years using the d&b J series but still the site presents many problems when trying to achieve even coverage. The park has various undulations and generally slopes right to left.”

Over each instalment of the Proms, different set ups have been used as d&b ArrayCalc simulation software has advanced. Year on year the advances in technology has meant the sound quality has improved.

For 2015, these improvements were once again superseded by the introduction of the D80 twinned with the Array Processing expertise of Adam Hockley.

He set the system to allow a 3dB drop to 120 metres. Right from the start the difference was remarkable; mid frequencies in music playback that would typically tail off over distance would remain present even right at the back of the field. The desk was even able to be run between 10-15 dB quieter over the duration of the Proms due to the even accuracy of coverage.

On describing the use of the setup, Harris concluded: “The amazing Array Processing compensated for the natural attenuation of sound, to smooth the contour of sound pressure levels and the tonal response inherent to couplings between enclosures. Mixing the show was a very relaxed experience, safe in the knowledge that the full mix was getting to the back of the audience.”