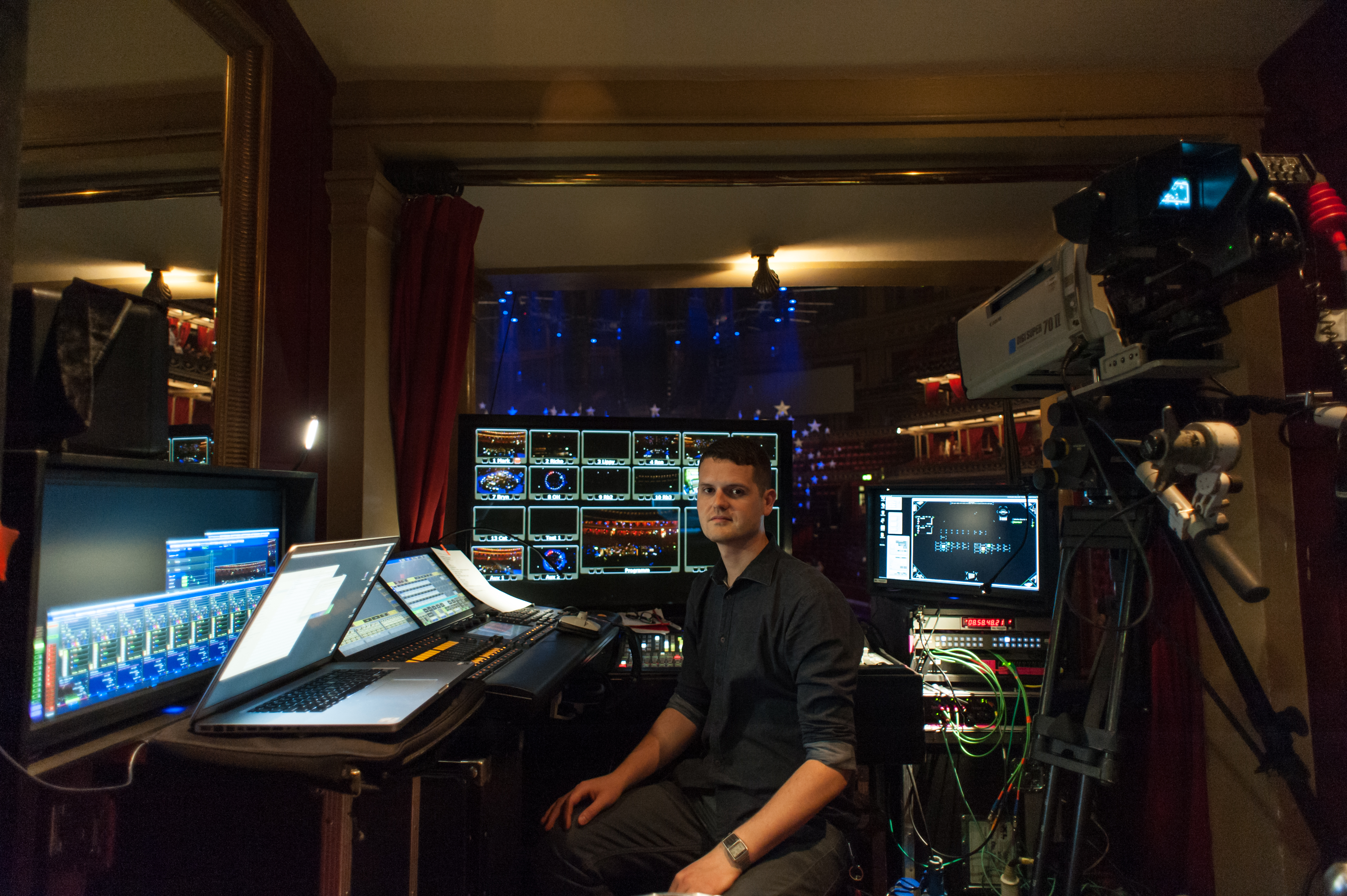 Ben Miles is a Video Director and Visual Producer who runs a company called Mixed Emotions London. They are specialists in creative visual shows and cutting edge technical video solutions. Ben has worked for many artists, most recently as Video Director for Mumford and Sons on their Wilder Mind tour. Mixed Emotions supply graphics and form part of the design team for Coldplay, for whom Ben is Video Director, working with them since 2008.

Mixed Emotions London recently won an AV Award for ‘Live Event Of The Year’ for Coldplay’s Ghost Stories tour. Mixed Emotions have been involved in a wide range of projects from the British Fashion Awards and a recent advert for Pepsi Max, to cruise ships and many festivals including Glastonbury and Radio 1’s Big Weekend. Ben has worked with artists such as Depeche Mode, Nile Rogers and Chic, Leftfield, Paulo Nutini and Elie Goulding.

As we see an increase in the amount of video screens and video elements at concerts and festivals, video has more scope for being used in different ways. Historically, video screens were used at large concerts and events to display magnified camera images to audiences who couldn’t see all the action due to being far away, or because of the sheer scale of some events.

Generally speaking, video screens are required at festivals to allow people further away from the stage to see the artists performing close-up. This is what we call ‘IMAG’ in the industry, and it stands for Image Magnification. This refers both to the type of shots the director is asking his camera operators for and often a term to describe screens either side of the stage, behind FOH, or further down the field. These are also called ‘delay screens’. Often these are supplied and paid for by the promoter if there is a line of sight issue specific to the venue where the that show is being held.

Now with increasingly larger and more innovative upstage and onstage screens, artists regularly bring their own media server setups from their tour to output to the festival screens. It’s often the case that the onstage video elements are a design feature and may be fragmented, rather than your typical 16:9 format screen. This makes it difficult to playback any show content, intro video or live 16:9 camera footage. In order to recreate the show as closely to the original design as possible, artists will often use the IMAGs for this purpose.

As the latest media servers have the ability to send out multiple outputs from one machine, it’s become the norm to output to the stage screens, onstage video elements and also to the IMAG and delay screens. This does raise the issue of what content is appropriate for IMAG screens, as their primary purpose is for people who can’t see the stage. Therefore the images should serve this primary purpose, be intelligible – and generally speaking – made up of an IMAG line cut.

I believe there is an art to a good IMAG line cut; it should tell the story of the music by showing each instrumental part of the music as it is introduced onstage. The cuts and transitions should follow the pace of the music, magnifying the soloists and key musical moments as if bringing the audience to the stage for a close-up of the band or performers.

It’s high pressure work for the director, who must make sure the camera operators are in place to deliver each shot in time in an often fast moving, ever-changing environment. Whilst the lighting or graphics cues may be the same every show, IMAG camera shots can vary hugely as performers move around the stage. A good director will be working tirelessly not to miss a musical cue and keep the screen work interesting.

As a Video Director, creatively I’m keen that all the screens have the same treatment and aesthetics of the overall design, but I’m cautious that this should be adapted differently for IMAG screens. Any video FX or content mixing that is too heavy can obscure the IMAG, beginning to defeat the purpose. Just duplicating the show graphics and sending it to all video screens falls short both creatively and in terms of IMAG requirements.

Simple colour treatments and mild FX are fun and work well to bring the visual show and stage action out to the rest of the field, but motion graphics content can come at the cost of people seeing the live action and focussing on the stage. However, with the amount of possibilities in the media servers and in graphics software there is a plethora of options to key in some elements of the motion graphics into the camera images whilst still retaining the integrity of the shots.

There are some situations where there are exceptions to this, for instance when the main performer onstage is a DJ. Here the stage show becomes more about the lighting, special FX and visuals. Some superstar DJs want to be in the limelight well lit and shot with mini-cams within their DJ booth, whilst others don’t want to be seen at all and prefer the visuals to take over. The lighting is often more FX-based and musical than it is ‘key lighting’ for the audience to see the artist. This then poses problems for the IMAG video director as there are only so many ways you can shoot a DJ and keep it interesting onscreen, especially if they are in the dark. Do the people at the back need to see a close-up of the super star DJ, who isn’t expecting to be onscreen and is picking his nose or loading up another favourite mix? Or is it more about the music and the visuals?

I have tried various different methods and combinations of mixing screen graphics and IMAG line cut as I’m sure many designers and video directors have. One nice solution is having another set of screens along side the IMAG screens. At the excellently organised and highly regarded Rock Werchter festival this year they had large, almost square LED side screens. These were big enough to put a 16:9 IMAG pip in the middle, leaving enough LED top and bottom for advertising or indeed graphics.

Electric Daisy Carnival heralded a festival first, certainly to my knowledge, by putting up LED screens surrounding all 360 degrees of the festival site in Milton Keynes’ National Bowl. Safe to say they had enough screen real estate to send images that everyone could view anywhere. I remember watching England v Portugal at Glastonbury in 2004 out in the field in front of the Pyramid stage, where Glastonbury had somewhat reluctantly agreed to show the Euro quarter final. The first disappointment for the crowd who had politely assembled in front of the IMAG screens was when one of the screens suffered technical problems and started cutting out. This caused a mass exodus from the left screen to the right where there was already a sizeable crowd. England went on to lose the match and were out of the Euros yet again – yet again making for undesirable content on the IMAGs.