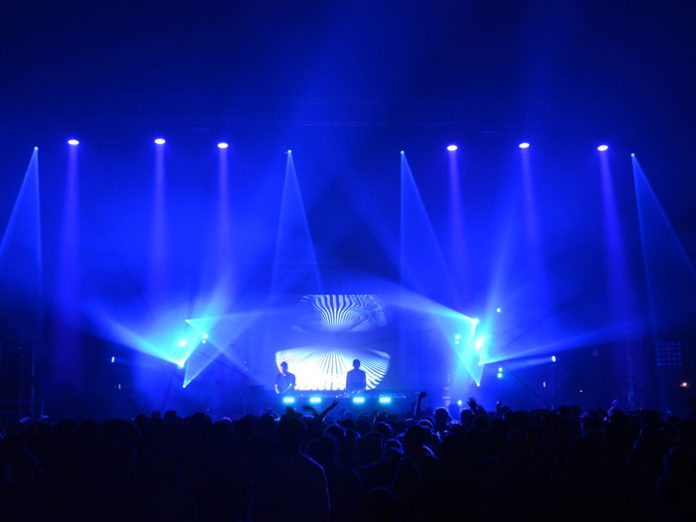 “We are all extremely proud of that achievement,” commented Colour Sound’s MD Haydn Cruickshank. “And in that time have seen the event develop and diversify, all the time retaining its unique approach to music programming and its emphasis on delivering the highest production values to its audiences”.

Working for LarMac LIVE, contracted by producers Loud Sound Events to coordinate all the technical elements of the event, Colour Sound supplied lighting to the nine largest performance areas, and LED screens to five of these performance spaces.

Around 140 moving lights plus generics, control and all the LED screens filled three artics at their north west London warehouse.

Fletch, Colour Sound’s project manager, worked alongside 17 crew, including crew chief Sam Campbell for two intense days of build-up and two glorious days of performance – alongside some slightly inglorious weather but nothing that seriously dampened any enthusiasm or the spirit for the occasion.

Lighting trusses were sub-hung on the main stage below the roof superstructure, and the flown front truss sections were curved to the contours of the roof to maximise the height.

The moving lights on this stage were a mix of 18 x Clay Paky Alpha Spot 1500s, chosen for their power and punch, 8 x CP Sharpies and 16 x a.leda K20s fitted with B-EYE lenses, dotted all over the trusses for the best and most dynamic coverage, and this combination of lights offered up plenty of options.

They were joined by 8 Martin Atomic strobes and 8 x 8-lite Moles.

The house control desk was a ChamSys MQ300 and the FOH was looked after for Colour Sound by Chris Steel and Toby Lovegrove, who made sure that all the bands had a great looking lightshow and that any guest LDs were made welcome and had all the kit they wanted and needed at their fingertips.

James Blake used his own touring video screen, flown just in front of the house one, and this was tech’d by Zac Blayton for Colour Sound.

Stage 2 was inside a large marque,e approximately 45 metres by 60 metres, with a capacity of several thousand. Colour Sound installed a 10 x 11 metre ground support system around the stage, with another truss above the audience rigged on the tent king poles.

Lighting was designed to be as flexible as possible to deal with the dynamic line-up of DJs and live acts, which included legendary French electronica duo Air headlining on the Sunday.
The moving lights here were 14 x GLP impression Spot 1s, 10 x Robe LEDWash 300s and 18 x ProLights Diamond 7 LED beam fixtures, and they were supported by 6 x SGM XC-5 strobes, 13 x Showtec Sunstrips, six 8-lite moles and eight 2-lites.

The video was a 6 metre wide by 4 metre tall surface of BT-7 upstage.

Lighting was run via a ChamSys MQ60 by Will Thomas. Dave Cattermole tech’d the video and Stu Bar and Frank Williams were the general lighting technicians.

“Field Day is one of my favourite festivals of the season,” said Fletch. “It is fun to work on, a great team of people all work very hard to deliver the very best production elements to a great audience, and there is a nice synergy and spirit. We all appreciate the great loyalty of being a supplier for 10 years, which is quite an achievement. I was exceptionally impressed with the little details this year – like notices dotted around backstage thanking us for 10 years of service which was very cool.”

Colour Sound’s frenetic festival calendar includes over 60 events all over the country, for which they are providing design, lighting, and video equipment and crew.