Home News Colour Sound shines at Barn on the Farm 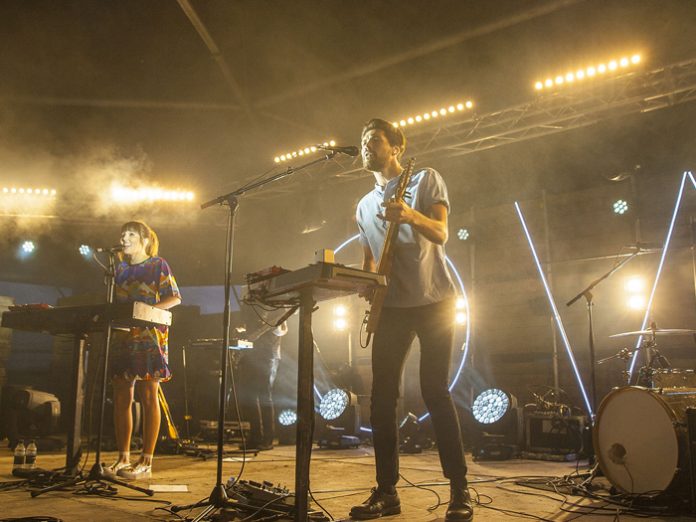 UK: Colour Sound Experiment supplied lighting equipment to creative visual design specialist MIRRAD for three stages at the 2016 Barn on the Farm festival, staged in the pastoral site of Over Farm just outside Gloucester.

In addition to being a unique boutique experience, Barn on The Farm is forging a serious reputation as a showcase for emerging talent after show-stopping performances by artists like Ed Sheeran, Ben Howard, Bastille, Hozier and others that headlined Barn on the Farm just ahead of major career leaps.

Colour Sound’s Haydn Cruickshank said: “We are always happy to collaborate with MIRRAD as their work is so varied and interesting. This event in particular is really special and we can all relate to its core values”.

The seventh Barn on the Farm was headlined by Oh Wonder and Jack Garratt, and this year the Main Stage was ensconced in a brand new cattle shelter for the first time. This was built on the land in the intervening 12 months, providing a semi-permanent structure that can be utilised for the event with the bonus of proper weather protection.

Lighting challenges presented by the structure included the low weight loading of the circular roof and the restricted roof height, which they worked around in characteristic style, presenting inventive solutions to hang lighting over and around the sides of the stage.

The moving lights were 28 x ProLights Diamond 7 LED washes dotted around trussing at the back and sides and on floor stands onstage, together with 8 x Robe MMX Spots providing the hard edge fixtures.

Eight Robe CycFX 8s were positioned upstage at the back, skimming up some wooden slatting which formed a backdrop and took lighting extremely well, bringing a hint of 3D to the stage area. Thompson likes the CycFX because their lensing and movement makes them a lot more useful than a standard LED batten, and having lighting on the back wall made a difference to the look and feel of the stage, even for those artists who played in daylight.

Ten active Sunstrips were attached to the back truss pieces, plus 2-lites and a single truss section rigged to a structural pole at the front facilitated positions for the ETC Source Four key lights.

An Avolites Sapphire from MIRRAD ran the main stage lighting which was overseen by Thompson. He and the team also accommodated a couple of headliner guest LDs and their specials packages.

“Colour Sound helped enormously in providing a generous amount of kit for the available budget,” said Thompson. “The event is gaining profile and as well as putting a lot of vision and thought into the artist booking, Josh and Matt are really keen to ensure their audiences and performers can benefit from the best production experiences”.

The event kicked off with ‘Intimate Friday’, opening the Wooden Barn Stage, the event’s smallest live space. Performers played on the mezzanine floor of the Wooden Barn for the Saturday and Sunday nights, but for the opening night the stage was set up at ground level.

At the end of the night, the lighting rig – all six Chauvet Rogue R2 Spots, five 300W fresnels and 8 Sunstrips of it – was carried upstairs and set up for the next day. It wasn’t the longest or biggest overnight festival re-rig, but 11 cage / squirrel lights were added for the Saturday and Sunday sessions for additional quirkiness, all amounting to a small but perfectly proportioned rig for the space.

This stage was looked after by MIRRAD’s Kieran Gilmour, who operated using an Avo Quartz with a Titan Mobile wing. He followed a tungsten theme harmonious with the warmth of the wooden surroundings, emphasising the relaxed ambience.

In the next field next along – with ostriches on one side – was the Outdoor Stage, a compact space, which Thompson’s design ensured was filled meaningfully with six R2 Spots on truss towers at the back, 12 SGM XC-5 strobes, six 6-lites and 6 x LED PARs, three per side on the downstage corners for front light.

Lighting was programmed and run by MIRRAD’s Cat Bryan using the same Avo Quartz / Titan wing set up as Kieran’s in the Wooden Barn.

The MIRRAD team was completed by Mel Cornish, and the site lighting was finished off with several hundred metres of Colour Sound’s LED festoon draped all around.