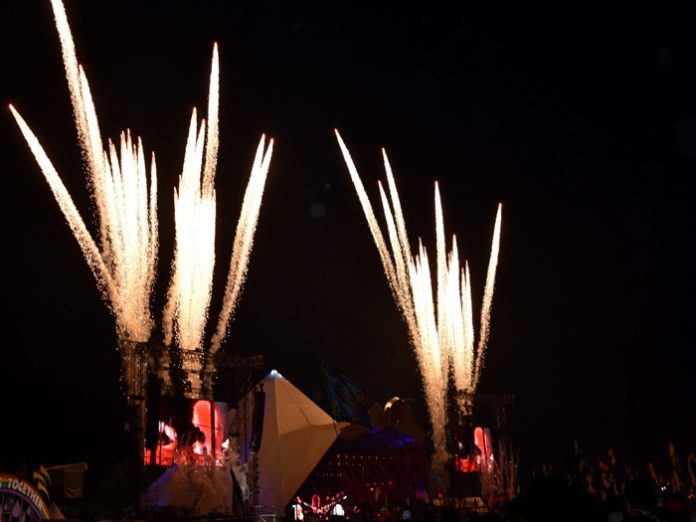 UK: Quantum Special Effects provided confetti, streamers, and pyrotechnics for three major headline acts at the muddiest Glastonbury on record. Battling against pouring rain and mud that threatened to swallow flight cases, the Melksham based company managed to survive and service its biggest Glastonbury festival to date. With trends in special effects rapidly becoming a staple of festival entertainment, the Quantum team were called upon to supply bespoke visuals for Foals, Muse, and Adele on both Friday and Saturday night.

In close collaboration with the individual production teams, Quantum worked tirelessly over the weekend to ensure each act had its own stand-out programme of SFX to entertain the crowds. Starting with Foals on Friday night, Quantum provided 30kg of white confetti alongside four stadium shots of white and blue streamers for the final song of the band’s set ‘Two Step, Twice.’ In a rare moment of clear skies, the biodegradable paper flew into the air against a sunset backdrop.

Closing the evening were returning headliners Muse, who became the first act in Glastonbury history to have topped the bill on all three nights of the festival. Quantum has worked with Muse on many of their previous tours and was confident in maintaining the band’s reputation for an outstanding live performance. A dazzling combination of comets and mines were fired from the towers either side of the stage for song ‘Globalist,’ whilst anthem ‘Mercy’ saw 84kg of custom ‘drone’ shaped confetti pour into the audience. For the final touch, 12 stadium shots were wirelessly programmed to release 132kg of streamers which matched the colours of the on-stage visuals, arcing over the crowd in a display of red, pink, purple, yellow, and blue.

Quantum CEO Shaun Barnett, said: “On Saturday, our sole focus was Adele. We’re currently providing an arena-wide confetti storm and bespoke rain system for her world tour, so it was essential to translate the same elegance and impact of these effects to the Pyramid Stage with an added Glastonbury twist. With 28 confetti blowers stationed around the entire audience area, we completely covered the crowd with 200kg of custom-printed confetti for ‘Rolling in the Deep.’”

In addition to the usual 10 handwritten quotes that fans can find at her concerts, brand new Glastonbury inspired notes were added to the confetti including ‘Glastonbury 4 life,’ and ‘I bloody did it!’

For its final contribution, Quantum surprised crowds with a 25ft pyro waterfall for song ‘Set Fire to the Rain.’ Lasting for 30 seconds, the effect lit up the entire stage bringing the infamous song lyrics to life for the whole audience to see.

All of Quantum’s work is fuelled by expert gas suppliers and sister company, Gassed Up. This year operations coordinator Claire Webb organised the CO2 for all of Glastonbury’s headliners including 56 individual canisters for Adele’s bespoke confetti launch, as well as Tame Impala’s debut Pyramid set and Coldplay’s big Sunday finale.

You can catch a glimpse of all the behind the scenes action that went into providing Glastonbury’s gas and effects in Quantum’s video diary here.

Shaun concluded: “Next up on the festival circuit we’ve got British Summer Time Hyde Park and Reading and Leeds where Mumford and Sons, Take That, and Biffy Clyro will all get the QSFX treatment. We’re looking forward to it – and as the Quantum team has already proven, the show will go on whatever the weather – but let’s still pray for sunshine.”