Returning to Leeds Festival for the third time this year, the Relentless Stage once again invited an eclectic cast of top talent from the electronic underground to perform on what has become the epicentre of the event’s late night entertainment. Collaborating with live events agency and festival promoter Vision Nine to bring the project to life, Relentless continued to refine and improve the experience for 2016 – further solidifying the brand as a legitimate purveyor of quality music and production-heavy, immersive live experiences.

Situated on an avenue shaded under an auspicious tree canopy, the long illuminated approach to the stage was consistently packed out with dance music aficionados over the course of the weekend. According to Relentless’ Regional Marketing Manager for the UK & Germany, James Sutcliffe, the Relentless Stage isn’t quite an anomaly in the brand’s festival sector portfolio, but it is arguably the jewel in the crown. “It’s a benchmark for what we’d like to achieve going forward,” he said. “It’s different to anything else we do in that we own the space and programme it from the ground up.”

In stark contrast to the non-participatory ‘brand slap’ that Relentless (and a litany of other sponsors) deploy at various festivals, the Relentless Stage is a seamless and highly valuable fixture of the event – more of a destination than an activation. Its insular, ‘natural warehouse’ atmosphere was cultivated via mesmerising projection mapping and lighting, making it perhaps the most aesthetically pleasing location in the entire site. “It’s incredibly important for us to bring value to the event,” continued Sutcliffe. “People look out for our line-up each year, and they sense the authenticity and passion that we bring to the table.”

Speaking of the line-up, this edition boasted performances from Jaguar Skills, Hannah Wants, Andy C, Levelz, Monki, Feed Me, and more. Relentless’ music policy and curation sensibilities have been painstakingly refined not just to reflect the core values behind its products, but to transcend the company’s original remit and become a bona fide creative force in the industry. Relentless’ extensive history in working with the multi-faceted Vision Nine – whose own events include the increasingly successful Boardmasters and NASS festivals – helps to facilitate this. Vision Nine’s internal team of experienced and passionate music and production specialists, intimate knowledge of Relentless’ ambitions and style, and longstanding supplier relationships are all huge factors in the success of the stage. “We do rely on the festival for power, for example,” said Vision Nine’s Group Account Director, Paul Campbell. “But for sound, light, staging, hospitality and catering – we bring all of that in ourselves.” 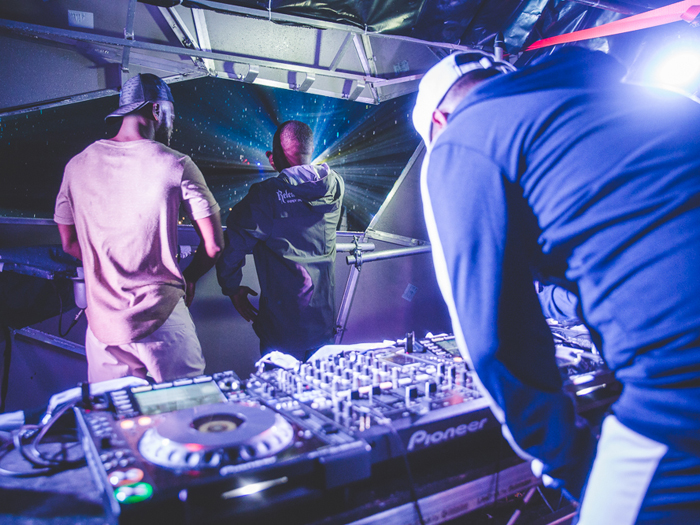 Now that a solid foundation has been established for the space, Relentless have a “three to five-year plan” on how to tweak and develop it in the future. Improvements for this year included the extension of the approaching avenue, an increase in lighting, a reconfiguration of the bar set-up, altering the opening hours of the area as to not clash with the other stages, and the development of the backstage catering and hospitality area. “Looking after our artists is something that’s incredibly important to us,” said Campbell. “We want them to not only feel that they’ve performed to an amazing crowd, but that they’ve been properly looked after by us. Fortunately that’s something we’re becoming known for now.”

Sutcliffe added: “For me this is more than an event, it’s an experience. From how beautiful we’ve made the approach to the stage, to handing out water and the careful positioning of the bar – all of those details add up. An ‘event’ is a two-dimensional concept, and we want to make something more immersive than that. On a site like this when you’re competing with a main stage that has the clout to put on massive international artists, we offer something different. People come away from here with a night they’ll never forget.

“The space we’re utilising won’t change but what we do within it certainly has a huge amount of potential – with everything from the size and shape of the stage to the projection mapping and lighting. What we want to try and move forward with is how to take the experience all the way to the back. It’s an amazing spot as it is, but there are always technological advancements to take advantage of and new ideas to implement. Year-on-year we’ll just keep on layering up on what we have.”

Despite an obvious necessity for sponsorship at most festivals, there still remains a fairly large contingent of festivalgoers who are sceptical towards the value that commercial entities can add to events. As Sutcliffe attests, however, when brands execute colossal, high concept ideas in such a consummate and native way then attendees only react positively. “As a brand it’s very easy to chuck money at a situation and stick your logo everywhere to achieve your goal, but that doesn’t consider the consumer. We don’t want to stand out in the wrong way. We want to be noticeable but in a way that also blends in, which is a very tricky balancing act. I think what we’ve got here achieves that, to the point where people see Relentless purely as a stage, rather than a brand.”

The way Vision Nine and Relentless complement each other is integral, as Sutcliffe asserted: “I certainly would never underplay the role of Vision Nine in this,” he said. “This is what those guys do; one half of their business is dedicated to putting on amazing events, and their team has a whole spectrum of skills. That makes our job a lot easier. We as a brand like to be involved in the creative process – it’s not about writing cheques but making this a truly collaborative effort. Vision Nine provides us with a platform and structure to make that easy. It’s a fun process rather than a laborious one.”