Home Insider Insights North America May Have Found Its Own Ibiza

Julian Prince is a DJ / producer and hospitality industry professional from Montreal. He’s one of the co-founders of SXM Festival, which will take place on the Caribbean island of Saint Martin from March 15 – 19 2017.

There is one certainty of every Ibiza summer season. No, it’s not an American film star spotted going in at DC10. Or some high flier losing their job after changing that return flight home one too many times (although both these occurrences are common). No, the one thing that is guaranteed to happen every Ibiza season is that at some point, somewhere else will be declared ‘The New Ibiza’.

Firstly, let’s be clear. There is and only ever will be one Ibiza. But that said, there are a bunch of new destinations in Europe or nearby that have managed to recreate the vibe of The White Isle and become great dance music destinations in themselves. When you look at North America, however, the situation is very different. It’s not so much that we need a new Ibiza. We just need an Ibiza. And I think we may have found it.

Let me tell you a little bit about Saint Martin. Situated in the heart of the Caribbean, Saint Martin / Sint Maarten is a small island where temperatures hover in the 80s all year round. This dual territory paradise (one side of the island is French, the other Dutch) has rolling green hills, endless sandy beaches and inviting tropical seas. The mix of European culture with a West Indian flavor characterises this magical place, creating a bohemian vibe that is perfect for vacationers and party-goers alike.

Saint Martin’s airport – known for insane landings where jets thunder in just metres above beach dwellers’ heads – is the second busiest international airport in the Caribbean and impressively accessible. There are 18 weekly direct flights from Paris and Amsterdam and countless flights from the US and Canada, plus many flights from South America. You cannot fly to Ibiza directly from North America. But sure can to Saint Martin.

My family are from Montreal in Canada but, tired of recently harsh winters, my parents moved to Saint Martin as part of their retirement plan. I’ve been visiting the place for over a decade now and it struck me quite early on that there was potential in this place beyond regular tourism. That is when I started to dream up the idea of SXM Festival.

Anyone with a working pair of eyes and ears can tell that dance music has exploded in the States in the last few years. Though house and techno was born in America, it has never made it into the public’s consciousness as readily as it has with the arrival of EDM. The maximal dance music style and spectacular shows that go with it have really awoken a generation of ravers to the possibilities of dance. And after their initial interest in EDM, they seem to be investigating further and getting into more tasteful and niche scenes.

What that means is that underground stars such as Richie Hawtin, Ricardo Villalobos and Jamie Jones are now just as in demand in the States. They are taking their labels, brands and DJ sets to all manner of events and big festivals all over the country, with adoring crowds packing in to see and hear what they have to offer. As such, SXM is perfectly positioned to bring more of these acts – but in a setting unlike anywhere in the USA.

The festival’s location in the Caribbean means it is close to North and South America — in the South, too, dance music is exploding all over Brazil, for example — so makes it a perfect hotspot for people from all over this part of the world to escape to and party.

The island is effectively European (albeit with a Caribbean twist) and has a laid back atmosphere that you don’t really find anywhere in North America. France and Holland are also two nations with massive dance music scenes and rich histories.

Saint Martin already boasts lots of existing clubs and has 24-hour licenses so you can party indoors, outdoors, in pools, nature reserves and on beaches. This existing infrastructure lends it to becoming a new global dance music hotspot.

It also has some of the best sailing in the Caribbean – so plenty of space for the super yachts of the oligarchs and mega rich who also like to splash their cash so extravagantly on The White Isle.

Saint Martin can also complement Ibiza, as when Ibiza is closed in the Northern hemisphere winter, there’s no magical island to visit. But guess what? That is when Saint Martin’s weather is the nicest – which is one reason we hold SXM Festival in March — there are several direct flights from Europe to the island each day. Further reasons why the island could become a global hotspot.

Finally, and perhaps most importantly, go and take a look at the two islands next to each other on two maps. Squint a little and they even look alike! OK, not exactly the same — but that is the point. Saint Martin can never be the same as the original White Isle. But it can be something similar and give some of that magic to a North American audience who so desperately need it. 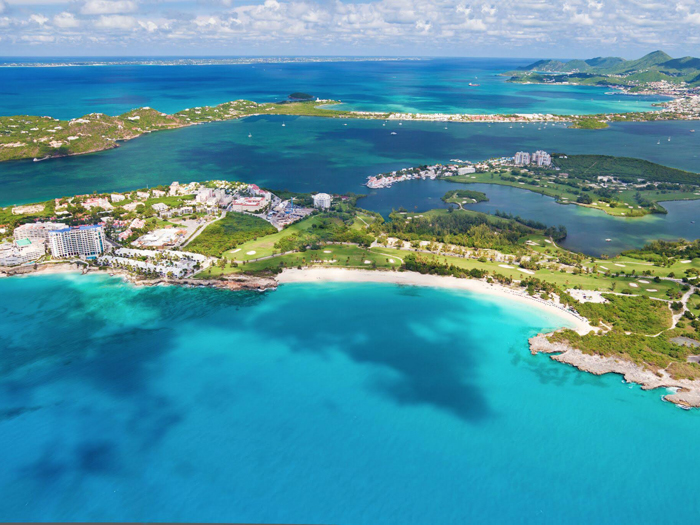