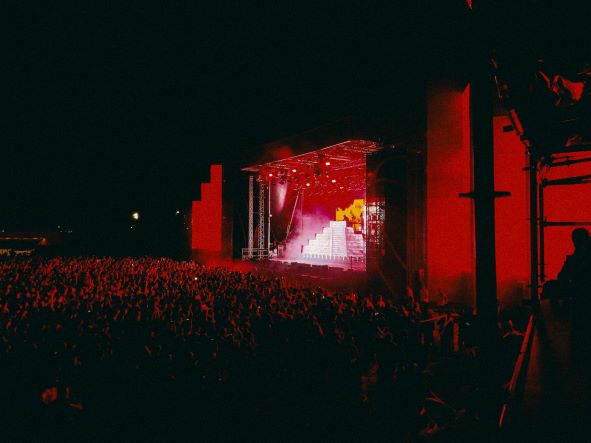 The Drumsheds signalled the end of its tenure as a groundbreaking temporary venue in London with a series of sold out 10,000-capacity shows, staged by Method Events for Broadwick Live.

The venue, which is situated in Enfield, North London, consists of four lofty warehouses on a previously derelict, 10-acre industrial site. It was procured on a temporary lease in Summer 2019 by Broadwick Live, who entrusted the delivery of several high-profile shows and a festival at the venue to Method Events. The lease has now been returned to Enfield Council, which is redeveloping the site as part of its £6bn, 25-year Meridian Water regeneration programme.

Over the past three years, Method Events have delivered a number of unique shows at The Drumsheds. These included Field Day festival in 2019, and a series of summer festivals in 2021 headlined by brands including Above & Beyond, Defected and Pendulum. The Drumsheds’ final three shows – The Hydra: To Be & Not To Be and a Hospitality Records New Year’s event – took place between November and January. They welcomed 10,000 attendees each and featured lineups including Four Tet, Nina Kraviz, Jeff Mills and Andy C.

Method played a pivotal role in the transformation of the site from a disused space which was hidden by a thick carpet of overgrown vegetation, into one of London’s most vibrant and unique venues. They overcame a number of challenges at the site including proximity to an operating business park, as well as the fact it is flanked on two sides by canals which are protected by the Environment Agency. Local stakeholders IKEA and Tesco, which operate large-scale stores nearby, also had to be taken into consideration.

“Working on shows at The Drumsheds has been an enlightening experience,” said Method Events Co-Founder James Dutton. “Being a post-industrial, brownfield meanwhile space, there is almost nothing about it that resembles a ‘traditional’ event site. Our approach to it has been an unprecedented one, and we have had to think outside the box.

“There have been many challenges but we have overcome all of them – with the right team and the right approach, we can work through any problems methodically. I am immensely proud of the work we have done at The Drumsheds.”

Lighting and video at The Drumsheds was provided by Siyan, who helped to realise the vision of the performing artists and the team at Method. They provided a house rig for both the outdoor and indoor spaces, as well as accommodating show-specific requests for incoming artists.

Siyan’s Jez Johnstone said the Method team were “brilliant” to work with throughout. He elaborated on some of the custom equipment that went into shows at The Drumsheds: “For the November Black Coffee show, part of the LD Eran Klein’s design meant we had to vertically hang a 6m OD truss circle. Through the centre of the truss circle we then had to rig an enormous custom fabricated LED ‘jewel’ set-piece hung directly above the DJ.

“Method and Broadwick were ambitious in what they wanted to achieve at The Drumsheds, and we were delighted to help them realise it – even if it was a challenging venue at times,” said Johnstone.

Will Holdoway, Co-Founder of Method Events, added: “Our work on The Drumsheds with Broadwick has been pivotal to developing Method’s tools, systems and approach. Navigating through the twists and turns of maintaining such a high-capacity yet unusual venue during Covid and subsequently delivering a series of landmark gigs has certainly kept us on our toes.

“From a background in outdoor festivals, it has been exciting to apply many of the same principles and expertise to a worthwhile use as part of a wider regeneration project. We look forward to our next opportunity in realising a unique space that challenges the status quo, while breathing new life into an area.