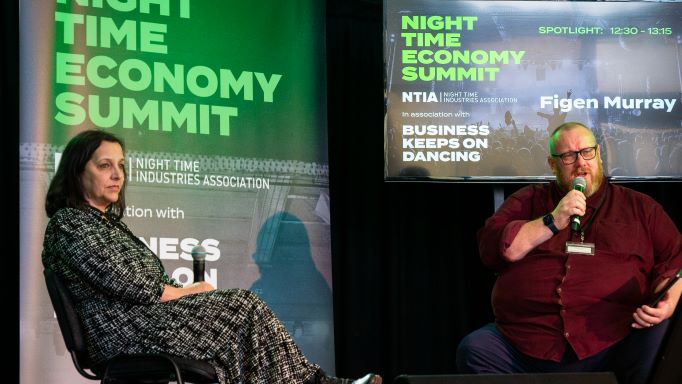 Figen Murray isn’t a born campaigner, but she’s a successful campaigner; diminutive in stature, she walks tall, stands firm and fights hard. It’s what any mum would do for their child but tragically, in Figen’s case, it’s all in memory of her son, Martyn who was one of those murdered at the Manchester Arena attack in 2017. At the recent Night Time Summit, NTIA head, Michael Kill, interviewed Figen to learn about the development of the upcoming Protect Duty that requires venues and events to apply counter terror measures, its critics and the response. We were listening to report key extracts.

“My journey started on 22nd May 2017, it was a Monday, a day like any other, I was the mother of 5 children, happily married (I still am), but now I have 4 children who are still alive because one of my sons never came home that night, he died at the Manchester arena. I was working that day as a psychotherapist and that was the last day I worked as a psychotherapist, I can no longer carry out that job and my life has taken a whole different direction. Obviously when Martyn died, we were grieving, it was a life changing year, the first year.”

Figen went on to describe her shy personality, simply working from home on one-to-one sessions with clients before Martyn’s death then spending a year at home trying to cope from day to day. Her campaigning was inspired by Katie Melua, she continued:

“It was Father’s Day and some of my children bought my husband Katie Melua tickets, I’ll have to contact Katie to let her know she’s the instigator. It was the first week in December and we went to a small Manchester venue and I remember getting ready and taking my tiniest handbag with me. This is nearly 18 months after the attack and I thought, foolishly, that security is going to be top notch everywhere after all that happened. Surely, it’s going to be really red hot…we arrived at the venue, my husband takes the tickets out, we walked into the venue, there were staff talking to each other and nobody wanted to see our tickets, never mind bag searches, we walked straight to our seats. During the concert I cried, my husband realised I was crying, he said ‘It’s the songs isn’t it?’, I said I wasn’t even listening to the concert, I’m crying because there’s no security, nobody checked my bag, it upsets me, have they not learned?

Christmas came and went and Figen took time to research security at venues, finding to her surprise that although counter terror advice existed, there was no legal obligation for any venue to have measures in place, all measures were voluntary. A gov.uk petition followed; 6 months of building a Twitter following resulted in 23,500 signatures but Figen points out that this figure was surpassed by a petition to bring back the Jeremy Kyle show and one to bring back plastic straws to McDonalds. Despite this, her campaign came to the attention of Brendan Cox, whose wife Jo Cox MP was murdered by a right-wing extremist in 2016. Figen continued “he called me and said he’d seen my petition, believed in it and wanted to introduce me to someone who could help and sit me in front of ministers. And that’s exactly what he did; first he introduced me to an amazing guy called Nick Aldworth who, at the time worked in counter terrorism”.

A meeting between Figen, Nick, Brendan and the then Security Minister, Brandon Lewis was arranged, which Figen concluded by stating “as you can see, I’m only five feet short, but I read somewhere that, if you think small is not effective, you have never been in bed with a mosquito…can I assure you, I will not go away until this is done. This is how Martyn’s law came into fruition”

Congratulating Figen on her tenacity and phenomenal work, Michael Kill asked about what Figen wanted to see from any legislation that was introduced as a result of the campaign, she responded “You have to remember that I was on my own in this campaign, the media picked up on it and was very unhelpful because headlines like ‘Arena Victim’s Mother Wants Airport Style Security Everywhere’; that’s not what I was after, Martyn’s law is a very straight forward, common sense thing, that people engage with free of charge counter terrorism training that’s online, it’s 45 minutes’ training, that’s all. We want people to carry out risk assessments of their venues, it’s health and safety, it’s common sense, it doesn’t cost anything to look round the building and see how a terrorist can affect us if they wanted to, then anything yu identify as a risk, just deal with it. It could be as simple as changing a lightbulb that isn’t working, changing a lock or thinking about exit routes if something should happen.”

“This leads on to the next thing we are asking; have a counter-terrorism action plan in place and tell your staff. It happened in Borough Market, somebody with a machete came towards a restaurant and, thankfully, the manager had the common sense to run to the door and lock it to delay the guy from coming in…don’t think ‘it’ll never happen to me’. I thought terrorism only happens abroad.”

“The final thing is that local authorities need to be prepared and work with you. And that’s all it is, which is a shame because when I first launched the campaign I was attacked on twitter [by people saying] ‘this is going to ruin us financially, it’s too expensive, you’re going to take the spontaneity out of church fetes and jumble sales; I had so much criticism”

Michael went on to outline some of the work the NTIA are undertaking to make sure that venue operators understand how to implement measures, then asked Figen for her feedback on the recent consultation on Martyn’s Law, or the Protect Duty to give it its official title.

“There was a consultation, and the participation was really good, it had over 2700 responses and there is a publicly available summary; the issue I have is that the wording might not be strong enough and the accountability might not be strong enough. It has to be as strong [and as accountable] as health and safety legislation, as terrorism is a very serious threat and people can die or get seriously injured”

Next, the current state of play with staff shortages in the crowd management and door supervisor sector were discussed. Figen sees this as an opportunity to bring in fresh blood but with better pay and training, but he main fear is that “something else is going to happen because people do gather in big groups…the whole of Manchester’s night time economy are already doing regular counter terrorism training, there are waiting lists for the training events, I speak at each one to welcome and thank people”. A far cry from being in tears at that Katie Melua show. “Nothing stops any other city from doing the same”.

It’s worth noting at this point that the Nighttime Summit delegates were subjected to bag searches on the way in, but Figen had a very different experience at a previous speaking engagement and was swift to point out the inadequacies.

Despite early attempts to reduce levels of concern, there are still doubts resulting from a lack of guidance to match the duties proposed in the legislation and worries about cost and human resource, especially in a climate of high inflation and consumer pressures. Michael was keen to know how the general public could be engaged with the proposed measures. “Before Martyn died I had no idea about terrorism, but I went and did a 2 year Master’s in Counter Terrorism. My dissertation was about Martyn’s law, about letting the general public and small businesses know about it. In my dissertation I’m asking the government to not just bring the legislation out but also run a campaign for the general public, a soft touch campaign, but more of a hard hitting campaign for the industry”. She went on to suggest that the public should be empowered to call out venues on lax security”

Proportionality was the final and perhaps most crucial point, with Michael citing the ‘reasonably practicable’ requirements in health and safety legislation. Figen commented “I think that’s where the media got it wrong at the beginning with the stupid headlines.  When we launched Martyn’s law in Manchester I bought 6 hand-held metal detectors for £130 in total so that if anyone tells me they can’t afford security, I’ll donate one to them. But I think proportionality is important, and accountability, who is responsible if things go wrong”

As with all new legislation, people within an affected sector will be concerned by those that indirectly affect their business; it’s apparent that Figen Murray’s work hasn’t stopped at changing the law, it continues with industry engagement to properly explain the practicalities. Catching up with her after the event we discovered another layer to her campaign as a visiting lecturer to schools to tech pupils about online radicalisation through social and gaming platforms. If one person gives up a career to study, understand, campaign, consult, educate and, ultimately, save lives, surely our sector can take a little time to look beyond headlines and engage with that aim, that duty to protect.