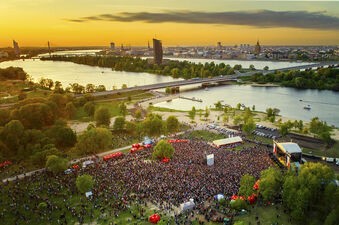 After unforgettable 13 years in Salacgriva, during which the popular music and art festival Positivus in Latvia has become a special event in many people’s lives after the two-year break will start a new beginning this summer. On July 15th and 16th Positivus festival returns and will take place in a new location in the capital city Riga, Lucavsala park territory. Lucavsala park has become a popular recreation place and perfect location for the festival. With the beautiful scenery of Riga, Lucavsala park is located alongside the Daugava river and is easily accessible from the city centre and gathers everyone who wants to enjoy nature while remaining close to the city. Positivus festival will continue to delight thousands of people with amazing music program and this year’s festival line-up includes participation of unexpectedly strong artists – A$AP Rocky, Megan Thee Stallion, Jamie xx, and many more.

Positivus festival has been the largest popular music and art festival in the Baltics, which has taken place in Salacgrīva since 2007 and has gathered up to 30,000 music lovers from Latvia and abroad every festival year. The festival has gathered many important and well-known foreign music stars like Muse, Nick Cave, Robert Plant, Iggy Pop, Imagine Dragons, Ellie Goulding, The xx, Sigur Rós, Sinéad O’Connor, and many others, a total of several hundred famous musicians of different generations. Positivus festival has been mentioned in foreign media along with other festivals in Europe that are worth attending and has been nominated for various European festival awards.