During a busy summer that saw GMC Events involved in the production of shows such as Shambala, Arcadia, Somerset House sessions, Shindig and Bristol Pride, director Ryan Wilmott took time to reflect on the changes he sees as necessary to secure the future of festivals, he shared them with us:

There are few industries that haven’t taken a hit over the past few years; but with social distancing, limitation of mass gatherings and systemic disregard at the hands of the state, for the live events industry it has felt like a direct attack. As is the case within most sectors, festivals are seeing a remarkable spike in staff turnover. Whilst giving onto dearth of experience amongst staff bodies, this issue exacerbates others: staff fatigue, difficulty securing infrastructure, and dramatic cost increases across all boards due to factors like Brexit. Nonetheless, these forced re-evaluations have uncovered necessary changes not least in light of our new COVID-dictated lives, but also in models and practice that pre-existed the pandemic.

One of the principal issues most easily measured in metrics is the extreme difficulty with which festival organisers have been met when attempting to secure infrastructure. Years of absence and insecurity in the live events industry has come at the cost of invaluable relationships between festival organisers and infrastructure companies which have been nurtured over years. This has forced organisers to start from scratch, and – as is especially the case with brand new relationships – are asked to provide 100% up-front costs for materials, mostly weeks in advance of the event. This challenge to cash flow aggravates pre-existing financial pressures resulting from this year’s lack of sales uplift which in previous years would take place closer to the event. On top of this, a lack of infrastructure availability more broadly impacts the capacity to be flexible which, in such an intrinsically precarious industry, is a vital hindrance.

These all-too-familiar and widespread shortfalls in ticket sales have only been made worse by the rampancy of fear-mongering narratives in the media. When coupled with relentless profiteering and political corruption – themselves supported by mass media corporations – this makes people even less inclined to make room for live events in their budget. The way people spend their disposable income has changed dramatically: now things like dinners, movies and family staycations take prime positions.

Nonetheless, albeit to a much lesser degree, the events industry has had to contend with such stumbling blocks for as long as we can remember, and with those stumbling blocks made even bigger, we’ve had to find new practical approaches to overcome them, ones that may have never otherwise been brought to light. Being forced to think laterally and, at times, start completely from scratch, in the moment is agonising, but in the long term encourages the development of more sustainable business models. We’ve learned some invaluable lessons, ones we’d already encountered in some form but could afford to approach with more complacency. For example: to be more engaged with our public from the beginning; to avoid spending more than is realistic to generate in revenue; and to be more creative with these revenue streams.

Though it be an unpleasant lesson to learn, over the past year especially we’ve been made to recognise the critical importance of emotional sustainability within live events practice and people management. A high staff turnover means that those with more experience are expected to assume multiple roles, and with burnout already at an all-time-high, this applies extra pressure and contributes to fatigue. Unlike the more easily perceptible issues I outline here, with staff burnout being more covert, it has arguably been most rewarded by a forced period of reevaluation and refashioning.

Furthermore, we’ve realised the importance of broadening our offering to make events more appealing to a wider cross section of society. Not only is this in our interest from a business standpoint, it promotes a balanced and inclusive culture that more justly represents the demographic diversity that makes the UK so culturally rich. With further rises in ticket prices inevitable, failure to install measures to ensure diverse representation – within both staff bodies and festival attendees – will mean that live events are at risk of becoming even more exclusive, an activity only viable for the upper middle and upper classes. Reaching out to a range of different communities is imperative, and must be ingrained in the practice of both long and short term planning. If the mainstream UK green field festival industry doesn’t broaden its horizons beyond a predominantly white middle class following, it risks shrinking to a niche industry that only a few can afford.

Asides from these important lessons, there is hope which doesn’t require digging into the drawbacks to uncover, but glimmers in plain sight within systemic restructuring. This past year, we have seen a much greater breadth of opportunity for young people to gain entrance into the industry; and the capacity for them to migrate up through the ranks has never been greater. With fresh perspectives and energy, and a more current understanding of social media and trends that are evermore shaping the way we live, an injection of this scale will no doubt have a positive impact.

However, for this impact to reach its full potential, we must cultivate an environment in which it can thrive. This means making the festival industry a desirable sector to work in, and being careful not to lose touch with the demographic groups most likely to push us forward. With more industry professionals letting their worldviews influence their practice, there is an undercurrent of positivity that runs throughout the sector. Nonetheless, in order for this current to become a tide of change, it’s integral that we recognise one of the three pillars of sustainability which is often lost within environmental narratives: that is, of course, social sustainability. To reiterate my previous point, a thorough consideration of who exactly festivals are marketed at and who is involved in creating and managing them, must take prime position in planning provisions.

I extend this point, as well, to incorporate emotional sustainability. Given the current cost of living crisis, the real effects of climate change, and the bombardment of media stories reporting on them, both the social and emotional aspects of our lives are arguably more fragile and complex than ever. In order to steer the festival industry in the right direction whilst riding the tides of positive change, it’s of critical importance that its culture is informed by the wellbeing of its constituent members, and inclusive marketing and hiring practices. 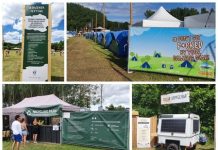