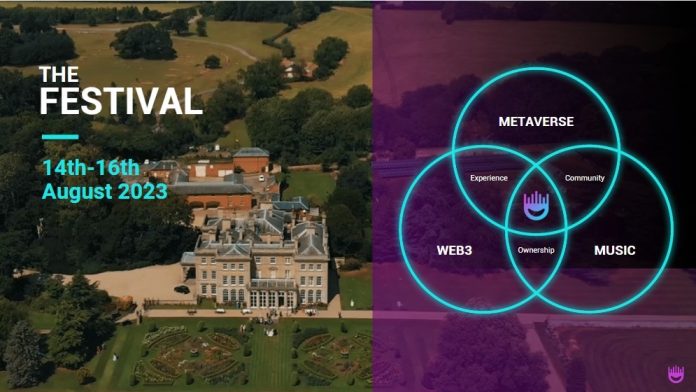 DCentralize Festival will put the power back in the hands of the music community by transitioning into a DAO (Decentralized Autonomous Organization), an organization constructed by rules encoded as a computer program that is transparent and controlled by the organization’s members, in DCentralize’s case, this will enable token-holders to participate in decision-making of the festival.

Driven by blockchain technology, DCentralize is a hybrid music festival and conference that will be held at Prestwold Hall Estate in August 2023. The live event will be streamed simultaneously in a custom-built metaverse hosted by Passage.

DCentralize Festival is on a mission to empower artists and enact social change through decentralization as the first festival brand to be tokenized and fully-owned by its community. Bridging the music and tech sectors, DCentralize aims to drive the evolution of the music industry using the latest Web3 technologies.

DCentralize and its partners will host a series of regular workshops – before and during the festival – to bootstrap artists and attendees with the knowledge of how to transition into Web3 with confidence. This is a clear demonstration of the team’s strong community focus and commitment to inform and empower people both within and outside the blockchain space.

DCentralize will ultimately transition into a DAO (Decentralized Autonomous Organization),  which will enable its tokenholders to participate in the management and decision-making of the festival in a fair and transparent way. Tokenholders will get voting rights on key decisions such as lineups, stage design, core management, festival expansion and more.

By joining the DCentralize community, tokenholders will become part of a grand collaboration driven by shared values and transparent communications, which levels the playing field making access available to all.

As part of a global promotional tour to drive awareness to the project, the DCentralize team will be hosting a series of events for some of the world’s leading Web3 summits and conferences. Supporting Web3 artists and musicians by giving them a platform to showcase their skills in a live environment is a key aspect of the DCentralize team’s mission.

Founder Ian Kerr has many years of management, event organization and logistics behind him and now heads into a bold new chapter with DCentralize. Ian says:

“DCentralize is already flying the flag for our beliefs. We work as a core community of professionals from the worlds of Web3, cryptocurrency, event management, travel, music, art and more. Working in a decentralized model means that the community can overcome the constraints of tradition, being supported by a network of specialist advisors.”

Technical and Creative Director Joe Crossley is the founder of Astral Projekt, an award-winning creative studio working in Web3 and immersive media. Joe is at the forefront of cutting-edge technologies. He specializes in augmented reality and projection mapping.

Andy Raisen, Head of Community Engagement says “DCentralize is utilizing the forces of Web3 to change how we all live our lives, helping to build a better world that’s open to all, and where you can have a real influence on the cultural movements that matter most to you.”