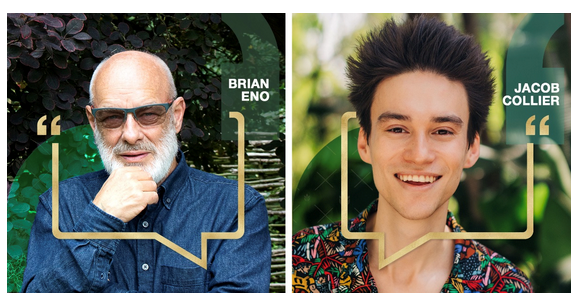 The Green Events and Innovations Conference (GEI15), the conference for sustainable events, is delighted to announce the renowned musician, producer and visual artist Brian Eno will be joining the event for a special Keynote conversation with Grammy award winning artist Jacob Collier.

Brian Eno returns to GEI after taking part in an inspiring talk with Norwegian pop artist Aurora last year on ‘Directing the energy of music for the benefit of the planet’. This year, he and Jacob will be exploring the concept of ‘Music as a social synchroniser’ for the 15th edition which will take place 28th February 2023 at the Royal Lancaster Hotel, London.

The unmissable conversion will see the artists explore the social function of music and how it changes us, how it offers us a local counterpoint to the big things happening in the world and why it is so important in a community. The whole question of where music comes from, and how it arises not just from the minds of individuals, but from whole societies, traditions and living ecosystems, is a way to also connect it to the big question of the climate crisis and music’s response to it.

Brian Eno is a renowned musician, producer, visual artist and activist who first came to international prominence in the early seventies as a founding member of British band, Roxy Music, followed by a series of solo albums and collaborations. His work as producer includes albums with Talking Heads, Devo, U2, Laurie Anderson, James, Jane Siberry and Coldplay, while his long list of collaborations include recordings with David Bowie, Jon Hassell, Harold Budd, John Cale, David Byrne, Grace Jones, Karl Hyde, James Blake and most recently with his brother, Roger, on Mixing Colours. Eno is also a founding member of the Long Now Foundation, a trustee of Client Earth and patron of Videre est Credere. In April 2021, he launched EarthPercent, which raises money from the music industry for some of the most impactful environmental charities working on the climate emergency.

Recognised by audiences, critics and fellow musicians alike as one of the most gifted young artists of modern times, 28-year-old Jacob Collier already boasts a seemingly endless list of achievements including five Grammy wins – which saw him become the first British act in history to win four Grammys for each of his first four albums – along with 11 Grammy nominations including Album of the Year in 2021. His roster of collaborators is astoundingly varied and vibrant, recording and performing with UK music icons like Coldplay and Stormzy, American superstars such as SZA, Alicia Keys and John Mayer, to Malian singer Oumou Sangaré and Moroccan Gnawa mâalem Hamid El Kasri. Each artist has sought out Collier’s distinct musical identity, cementing his status as the conduit for a generation’s ineffable creativity.

GEI 15 brings together leaders and innovators in the global live and events sector to network and accelerate environmental and social best practices, and to inspire collective action in the fight against climate catastrophe. Sessions will cover events adapting to climate change impacts and risks, transport, energy, food & beverage, academia working with industry, calculating, reducing and removing CO2 emissions, climate justice, design & materials usage for circularity, green innovation technology, and more. The event closes with the International AGF Awards celebrating achievements of the greenest festivals, venues and events in 2022