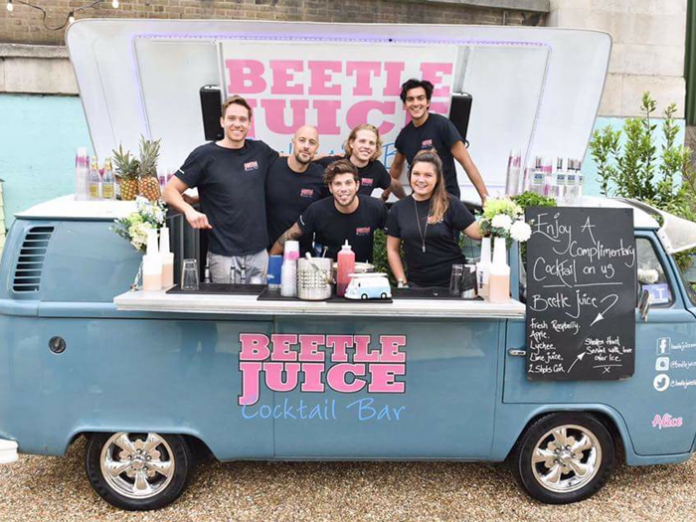 Having frequented many bars and festivals themselves, brothers Jonathan and Julian Gomma set up Beetle Juice in 2012 along with their best friend Harry Sloan to create a unique and truly mobile pop-up bar with a difference – it’s also a VW campervan. Catapulting into the events industry with a quirky edge, Beetle Juice serves premium cocktails from a vehicle that brings the party to wherever it goes, be it a festival, private party or street corner. Replicating their business plan and creating opportunities for budding bar owners to get involved, Beetle Juice has now successfully launched the Beetle Juice franchise with 14 vans operating in different areas of the UK.

Having served drinks at over 150 festivals of all shapes and sizes since 2012, we have experienced both the good and bad sides of ‘cashless currency’.

A much-debated subject in the festival industry is whether or not switching to ‘cash free payment’ is beneficial to both consumers and traders. Having been burnt in the past by this contemporary payment system, it is clear to us that the cashless festival will only truly take off when adequate protection is available for traders.

Before electronic payment systems were developed, we used paper: IOU’s in the form of bank notes and cash or even written instructions ordering a bank to pay a specific amount from one individual to another. Peaking in the 20th century, the cheque was the most common method of exchanging money when the modern day ‘festival’ first made an appearance in our culture. Although not appropriate for buying a burger in the mud and rain at Woodstock, times have changed and we now live in an age where 99% of people have access to a handheld computer, neatly tucked away in their back pocket that instantly connects them to the World Wide Web and subsequently, brings control of their money to their fingertips.

Developments in technology have changed the face of our society but, is the festival industry ready for a new ‘way to pay’ and would this huge shift in the festival landscape really be for the better?

Some would argue that there is no question: to keep up with millenials’ thirst to consume and the ever changing inclinations of Generation Z, instantaneous and effortless have become a necessity. But as a trader, I’m not sure if pleasing the punters is really worth the risk.

To operate at a ‘cashless’ festival is to:

• Operate entirely on trust – putting your income into the hands of a third party and relying on their honesty to provide you with the correct sales data and the dough to prove it.
• Risk not being able to serve in the face of technical problems.
• Pay more to the event organisers to cover the cost of using a cashless system and to cover any additional protection needed for system problems.
• Shun the original hippie customer who has attended more festivals in their lifetime than we have hairs on our head, whose skin crawls at the thought of having to operate a smart phone.

Gone are the days of skimming off the top of revenue. Gone are the days of rocking up, harmonica in hand, relying on the generosity of others to see you through the weekend. But out with the old means in with the new and many advantages come from adapting to this new cashless system:

• For industry newbies, it is a great way of building relationships with organisers who get peace of mind in a working environment made simple, without trust being necessary.
• It is easier to consume. Most of us are guilty of putting the bill on the plastic with the notion that as a result, there is still the same amount of money in our wallets. It is a simple and foregone conclusion for many that money that isn’t physically in the palm of our hands has less value and therefore, we spend more. Although there is no research to the fact as of yet, it is widely believed that in using a ‘cashless’ system, consumers are inclined to spend more.
• Speed up payment processing which results in an increase in potential sales whilst minimising the risk of human error.
• In terms of practicalities, there is also the leftover lolly to consider. As a forward thinker, I tend to have a rough estimate of my spending in my head before heading to a festival. For those that have to pre-load their festival wristbands with currency to escape long queues inside the venue, there is a high chance of over or underestimation, which often results in the last day rush to use up left over cash or the last minute top up to get us through the day.
• Perhaps one of the main attributes is the reduction in exposure to festival-goers of crime and in particular, the most common form of festival crime: petty theft.

Going back a few years to when we first started out, bright eyed and bushy tailed, we signed up for an independent festival known as ‘Galtres’ (without naming any names) which was pioneering the use of the cashless system. Year one went by without a hitch. Festival-goers topped up their cashless card to use on-site and we were paid our percentage within seven days of the festival’s end. Customers of all ages took to the process like ducks to water and seemingly everyone benefitted.

Unfortunately, this time fate was to throw us and many other traders a bad hand. With the festival organiser claiming bankruptcy, they failed to pay us what was owed, resulting in a police investigation. As it turned out, the money paid by consumers had gone straight into a business account with no controls on allocation and many lost a substantial sum of money. Despite a full investigation, nothing could be done and our money was never to be seen again.

Scarred from our first experience of the cashless system but having built up an excellent relationship with Live Nation’s Download, we tried again in 2015 when they first introduced their own ‘Dog Tag’ system in attempts to speed up queues and reduce crime. It was widely reported in that first year that systems crashed and festival-goers were unable to purchase food, drink and other products for periods of time at the event, drastically affecting ticket buyers’ opinions. Fortunately, our experience at this event and subsequent ones has been of a seamless system with no logistical issues.

Just a few things need to be done to prevent these horror stories from reoccurring:

• Money should be controlled by a third party to ensure financial failings from either side.
• Technical support should be available to ensure the smooth running of the software and facilities powering it.

With just a bit of extra planning and risk management, it’s not hard to make the best of the modern era and bring festivals in line with contemporary trends.

Looking forward, we see that Tomorrowland has gone one step further, not only adopting a cashless system but also creating their own currency, ‘The Pearl’, to cater for the festival’s international patrons. Having successfully implemented this payment method for several years, it seems as if this might be the way to go.