The best European festivals, artists and promoters of 2010 were revealed at a sold out ceremony which took place at Groningen’s Stadsschouwburg in The Netherlands, on the opening night of the 25th Anniversary edition of Eurosonic Noorderslag.

Decided by a combination of public vote and industry juries, Festival Awards Europe is the only event solely dedicated to recognising the contributions and achievements of the event organisers and performing artists that generate billions of Euros for local economies and brighten up the summer for tens of millions of festival-goers each year.


Stefan Lehmkuhl from Melt Festival Germany was surprised to win the artist best festival award saying “It was the greatest honour” adding that “according to Noel Gallagher Melt Festival looks like the inside of Marylin Mansun’s head”.

Leif Skov, one of the pioneers of Denmark’s Roskilde Festival was presented with the Lifetime Achievement Award. In a moving and inspiring speech on receiving his award, he said: “People and music together can move mountains and change opinions. And through all of our work with our festivals we have invented and defined for the world a new set of values that lie above and beyond a standard set of values that can be measured.”

James Drury, MD of Festival Awards Ltd, which organises the Awards said: “With over 350,000 votes and a 37% increase in the number of events our second edition demonstrated the breadth and strength of feeling among fans and festivals across the continent. This was a great celebration of the world leading festival scene.

Christof Huber, General Secretary YOUROPE commented “It was a major step forward from last year’s awards. We are really looking forward to the next edition and are confident that they will continue to go from strength to strength. Performances on the night from Alice Gold, Laura Jansen and Ben L’Oncle Soul. 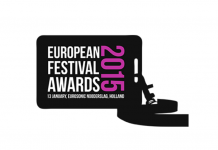